Fresh off an unexpected ballot victory in November, Minnesota’s progressive grass-roots groups see an opportunity to continue their organizing success — and carry their numerous supporters — into the legislative session, where they face perhaps the friendliest set of lawmakers in two decades.

“We’ve never come into a moment like this with as much visibility and power before,” says Doran Schrantz, who worked politically for economic justice as part of ISAIAH, a coalition of religious groups, before the voting amendment ever crossed her organization’s radar.

The question now becomes: “How do we actually catch up to that and [build] an agenda that’s big enough and courageous enough to match the moment?” Schrantz, the group’s executive director, said in an interview.

ISAIAH, which had never worked on a ballot question campaign, soon joined with such progressive organizing heavyweights as TakeAction Minnesota to form Our Vote Our Future, the at-first-rickety coalition that drove down sky-high public support for the voting amendment and eventually killed it at the polls.

Although ISAIAH started with almost no capacity to run a campaign, by the end of the effort in November, it had reached more than 23,000 voters through phone banks running five nights a week and distributed fliers against the amendment to 61,000 religious voters.

TakeAction — perhaps the main driver behind the campaign, which ended up raising nearly $3 million and contacting hundreds of thousands of voters — mobilized masses of volunteers in the lead-up to Election Day.

Mobilizing for their message

Progressive groups and such organizers as TakeAction and ISAIAH have ideas for sweeping changes about the way Minnesotans think about democracy.

Now is an exciting time for the once-underdogs — whom many credit with helping deliver DFL majorities in the Legislature — to reaffirm the progressive politics and economic justice message that they’ve advocated for years.

“These legislative majorities owe some of their success to the popular opposition to these amendments, and so as much as there’s a mandate, it’s around those sorts of values,” says Dan McGrath, executive director of TakeAction.

“There is a mandate for equity and fairness. There’s a mandate to do right by people who might be less fortunate than yourself,” he said. “That did mobilize the electorate, and that’s exciting.”

TakeAction’s tentative plans include pushing for changes in the voting rules for felons, expanding early voting — as some have discussed here — and modernizing voter registration. They also plan to tackle such issues as Minnesota’s impending health insurance exchange and MinnesotaCare, a health program for the working poor that it wants to ensure remains viable.

Minnesota Majority, the group that supported the voting amendment, plans to oppose many of those measures.

The voting amendment’s key supporters — including incoming GOP Sen. Mary Kiffmeyer, a former representative who sponsored the amendment in the House — say they hope to work with Gov. Mark Dayton to enact some version of the policies that failed on Election Day. 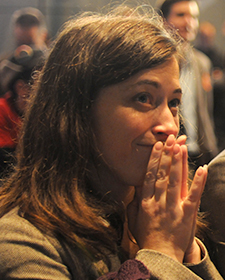 But she also said it’s more than just fighting for a piece of legislative funding here and a scrap of policy there.

“It’s not begging for crumbs or protesting — it’s being a part of responsible governance,” she said, referring to legislative efforts in the past.

Sen. Sandy Pappas, president-elect of the Senate and a preliminary member of a state-level progressive caucus of legislators, said she welcomes working with groups like TakeAction and ISAIAH this session. It’s unclear so far what role the fledgling progressive caucus might play in major budget and policy deliberations.

Most importantly, the progressive groups hope to build on the partnerships formed during the voting amendment campaign. ISAIAH has doubled its contact database, increased its online capacity and created links across the state.

“We feel like the momentum leading into the legislative session and the win on [defeating] Voter ID, which gave us all these other relationships … we want to leverage that,” Schrantz said.

Legislative lobbying can be harder

A victory sign in the entryway to the Take Action offices in St. Paul reads: “Zero days. We won!”

But continuing to stoke that volunteer energy deep into the legislative session can prove tricky for organizations that were focused on an Election Day vote.

As the Our Vote Our Future campaign dismantles operations, it’s unclear whether the same drive and optimism that defeated the once-seemingly-invincible voting amendment will translate to the less-glamorous process of long legislative hearings and dull floor debates on individual issues.

Typically, “they win — and then they split apart,” said David Woodard, a political expert at Concordia University, about how one-issue coalitions sometimes crumble.

Schrantz said ISAIAH is working to “pivot” members’ enthusiasm to other issues.

David Schultz, a Hamline University political expert, said progressive groups will have to navigate through the three groups of Minnesota DFL legislators: urban, rural and suburban.

“The DFL is not going to be open to all the progressive agenda issues,” Schultz said, noting that suburban Democrats might not want to stick their necks out too far.

But the progressive groups plan to make their case.

“There’s no such thing as a static amount of influence,” Schrantz said. “It’s really about openings and opportunities. The question is: How do you walk through the doors of opportunity that have been opened?”