In the early morning hours after the election, our pundits paid little attention to one historic sentence in President Obama’s victory speech. “A decade of war is ending,” the president said, pausing as a groundswell of applause filled Chicago’s McCormick Place to the rafters.

The audience applauded a president for promises kept. The first, the withdrawal from Iraq, came a year ago with the end of U.S. military operations there. Obama’s second promise — the withdrawal of the remaining 66,000 troops in Afghanistan — is scheduled to be complete by the end of 2014.

Getting there is not easy. It is easier to withdraw from a war than to forget it. The heart is slow to forget the damage done.

The Huffington Post this week reported on the American casualties to date from our wars in Afghanistan and Iraq. Since the start of the first war in Afghanistan in the wake of the 9/11 terrorist attacks, 5,225 Americans have been killed in Afghanistan and Iraq. The Defense Department confirms that 50 159 American have so far been wounded in the course of a decade of war in those countries, and 1,500 Americans have lost an arm or a leg in combat. In just the U.S. Army, 73,674 soldiers have been diagnosed with post-traumatic stress disorder.

What President Dwight Eisenhower called “the lingering sadness of war” will be with us for a long time.

Obama’s Republican adversaries will not give him a “Get Out of Afghanistan Free Card.” The last phase of his planned troop withdrawal from Afghanistan will coincide with the 2014 congressional elections. Republicans will distort an inevitably imperfect American exit from Kabul to look like a perfect repeat of the fall of Saigon.

Although in history “now” is never exactly “then,” Obama must end a war and construct a peace in a world at home and abroad that President Harry S. Truman would recognize.

Truman also faced hostility from Republicans in Congress who second-guessed his every move and denounced as surrender the terms of what proved to be a lasting peace in Europe. Truman’s policy also faced the challenge of a crucial world region — Eastern Europe in tumult — and an implacable adversary — Josef Stalin’s Soviet Union, determined to acquire and threaten us with nuclear weapons.

Obama now stands on the verge of a Truman moment in history.

The key to Truman’s success in diplomacy was a word that was taken off the table by both Obama and Gov. Romney in discussions of foreign policy during the recent election campaign.

It’s the word “containment.” Coined by the icon of 20th century American diplomats, George F. Kennan, in the anonymously written “Mister X” article for Foreign Affairs in 1946, “containment” was, first and foremost, a political, rather than a military,challenge to the Soviet Union.  The success of democracy in the U.S. and among its allies was our most effective political weapon against Soviet totalitarianism. 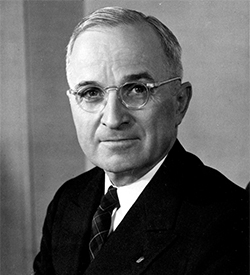 “Containment” accepted an odious regime in Moscow that Washington could not directly change and left the task of regime change to history and the internal evolution of Russia.

“Containment” also accepted that the only military option to Moscow’s acquisition of nuclear weapons was deterrence.

Finally, “containment” relied on, in Kennan’s phrase, “long term” patience and vigilance on our part. Look back on the history of the Cold War from 1946 to 1991. “Containment” worked.

What should this history lesson mean to Obama?

Above all else, our withdrawal from Afghanistan and the end to a decade of U.S. war allows us project power in the Middle East through the force of our political beliefs, not the superiority of our military weapons.

Secondly, Iran represents our foremost challenge and threat. We can hope for the pre-emption of nuclear weapons in Iran through diplomacy, sanctions and the option of military intervention.  We need, nevertheless, to plan a new strategy of “containment” for when diplomacy fails. Bill Keller recently argued in The New York Times, that “nuclear mullahs” in Tehran eagerly send others on suicide missions but are not themselves suicidal. They have another motive. Tehran lives in a neighborhood where five of its neighbors already have nuclear weapons and has learned a lesson from France’s Gen. Charles de Gaulle:  “No country without an atom bomb could properly consider itself independent.”

Obama’s task in the Middle East, like Truman’s in Europe nearly seven decades ago, is not to re-make the world in our own image but to prevent this part of the world from destroying itself. History cautions Obama to keep his expectations low and hope guarded.  Yet, as Obama also said in his victory speech, “Hope is a stubborn thing.”

Obama stands on the verge of a ‘Truman moment’ in history