Part 2 in a series

The long political battle over a Vikings stadium ended during the 2012 session, when legislators reluctantly agreed that the state would contribute its share of the $975 million project with proceeds raised from charitable gambling’s use of new electronic pull-tabs. (The state’s share comes to $348 million, with the Vikings paying $477 million and Minneapolis $150 million.)

To date, participating outlets — and revenues from the games — are falling short of expectations. But at O’Gara’s Bar & Grill in St. Paul, one of the first to embrace the new devices, customers seem to be enjoying the iPad devices, according to Pat Daddy, the establishment’s longtime bar manager.

We were on board right away [starting in September]. I think there’s no doubt about it — they help business.

We’ve got 12 machines, but so far I don’t think we’ve had any more than eight going at one time. At first, a lot of people were coming in just because they were curious. Maybe they’d order a Coke, maybe nothing. They’d come in and put down $20 to play.

The big difference between the machines and the cardboard pull-tabs [which the bar still offers] is that the machines go so much faster. That surprises people. They put down $20 and it’s gone. With the cardboard, people would go slower. They’d slowly pull back [the paper tabs] and take a peek, make it last longer. You don’t do that with the machines.

But people seem to be enjoying them, and they’re easy to learn to play, especially for people between, I’d say, 21 to 40. They’re more comfortable with technology. You have to help older people a little more because they’re just not as used to the iPads.

A lot of times, a group will come in, three or four people, and they’ll put down $20 for one machine and play it.

[A woman at the end of the bar interrupted. Laughing, she said, “I won’t play because I’m a Packer fan. I’m not going to contribute anything to a Vikings’ stadium.”] 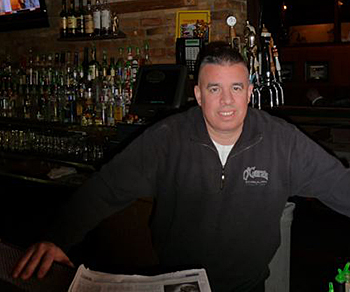 Biggest payout I’ve seen so far came the other night. A couple came in and put up $100 [cash only, no credit cards for the machines]. It paid $1,060. They left happy.

When people win, they sometimes buy a round for everyone and they usually tip pretty nicely, too.

The thing that’s surprised me most is there’s more bells and whistles than I expected. They do this [he turned on a machine and it went “ding, ding, ding’’] so they can create quite a bit of noise. And sometimes, when somebody’s winning, there’ll be a lot of people watching and having a good time.

I don’t think anybody is being hurt that much. Most people who come in don’t have a ton of money, but maybe they’ll throw in a twenty and, even if they lose they say, “Well, I guess I’m part of the stadium now.”

Saturday: An SPCO musician talks about the lockout.

Electronic pull-tabs for Vikings stadium funding: ‘People seem to be enjoying them’