When members of the Minnesota Legislature’s new DFL majority convene in January, they will be under immediate pressure from their constituencies to latch onto new sources of state revenue.

Not only will they have to erase a projected $1.1 billion budget shortfall for the coming two years. But they also will have to deliver on campaign promises to fully repay the $2.4 billion in school aid shifts used to help balance previous state budgets, as well as to boost state funding for education, transportation, property tax relief and other programs.

Call it a fiscal crevasse.

For DFLers, one likely source of revenue is DFL Gov. Mark Dayton’s past proposal to raise income taxes on the state’s more affluent residents. Apart from its impact on small business, there’s not a lot of political risk for most DFLers.

Another revenue source could be the expansion of Minnesota’s 6.875 percent sales tax to clothing and consumer services, such as computer, legal, accounting and auto-repair services.

State Revenue Commissioner Myron Frans told me that this option is being examined “very closely” for possible inclusion in the tax and budget plan the governor will offer in January.

In the past, several leading DFL legislators – including incoming House Speaker Paul Thissen of Minneapolis and Senate Majority Leader Tom Bakk of Cook – have expressed interest in the idea of expanding the state’s sales tax base.

This idea has been kicking around the Capitol for nearly three decades:

“We do have a very narrow [sales] tax base in Minnesota,” Frans says. “As a consequence, we have a high tax rate. It’s the highest in our region.”

Currently, Minnesota ranks 21st among all states in sales tax collections per capita, but just six states have a higher tax rate than Minnesota’s 6.875 percent. 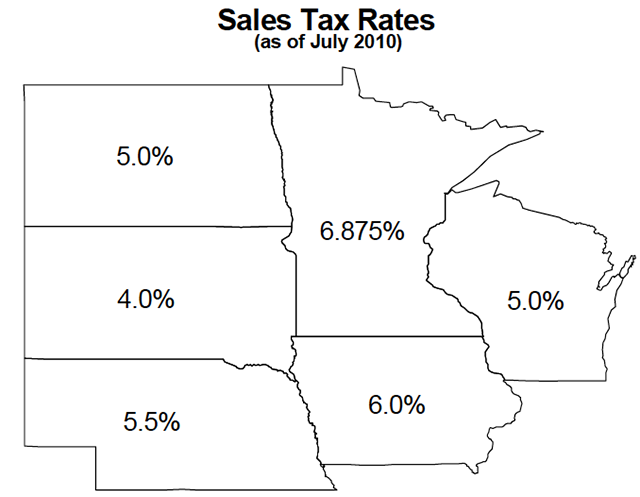 Research Department of the Minnesota House of Representatives

The many exemptions in Minnesota law also produce tax inequities and marketplace distortions. For example, women who do their own hair styling pay sales tax on the products they use, while those who patronize a hair salon do not.

“Generally speaking, the broader the tax base and the lower the rate, the better off you are,” says Mark Haveman, executive director of the Minnesota Taxpayers Association. “It reduces the distortions and allows you to obtain revenue without creating economic mischief with purchasing behavior and things of that nature.”

For the governor and legislators, expanding the sales tax is a tempting source of new revenue. Extending the sales tax to clothing would generate more than $330 million a year in additional revenue, and extending it to selected consumer services would bring in another $485 million annually, according to the state Revenue Department.

If policymakers wanted to make the change revenue-neutral, they could reduce the tax rate by nearly a full percentage point. Frans indicated one option he is examining is using part of the revenue for rate reduction and part for new spending priorities.

Research Department of the Minnesota House of Representatives

Such a proposal would likely draw opposition from retailers as well as consumers. Bruce Nustad, president of the Minnesota Retailers Association, says his group now is reviewing a proposed policy statement opposing the taxation of clothing.

Retailers question the wisdom of “reducing consumers’ disposable income as a result of increased taxes on clothing, especially given our current economy,“ Nustad says.

In addition, he says, “Retailers know they operate in a global marketplace, including competing against online retailers out of state. Expanding the sales-tax base on clothing in Minnesota puts local employers at a further disadvantage to their online counterparts who are not required to collect and remit sales tax currently.”

Expanding the sales tax to clothing also would transform one of the few tax advantages enjoyed by Minnesota retailers into a disadvantage. Minnesota’s border states all tax clothing, but they also have lower sales-tax rates than Minnesota.

Bill Blazar, senior vice president of the Minnesota Chamber of Commerce, says the business community will be watching for Dayton’s tax reform proposals to see how they mesh with his avowed goal of stimulating the creation of new jobs.

“I suspect that the governor’s tax reform proposals are going to include a healthy dose of tax increases,” Blazar says. “I’m not sure how you get to a tax system that encourages job creation if you are going to add several hundred million dollars in new taxes.”