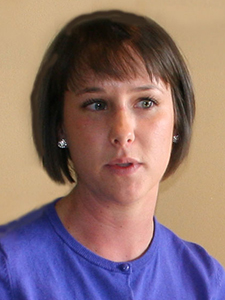 It was a difficult election year for Republicans in Minnesota. The DFL gained control of both houses of the Legislature, Sen. Amy Klobuchar trounced her GOP opponent and Republican Rep. Chip Cravaack was knocked off in the 8th congressional district. Among the GOP candidates to lose was Chris Fields in the 5th congressional district. Erica Schumack, Fields’ 23-year-old campaign manager, describes what it was like running against Keith Ellison in a Democratic year:

I jumped at the chance when I heard Chris was looking for people. I will say a lot of us are young. You can afford to be an idealist when you are young. It’s important to work for someone you truly believe in, and that’s what important.

Chris Fields was just refreshing. He reaffirmed that politics was what I wanted to do. The combination of his personality, of calling it like it is but also being a first-time candidate, not knowing not to call it like it is.

It was just a real break-in. It was kind of cool to be on this campaign for Chris because it was kind of the first time for both of us. I worked on campaigns but never anything on this level with this much responsibility. Chris had never been a candidate. It was two rookies working together.  Frustrating but rewarding, too.

Debates were the highlights of the campaign. They were the highs and the lows, for a couple of reasons. I thought Chris always performed really well and I never saw the numbers turn after that. Even knowing that we were putting our best foot forward, still the fact that our candidate had an “R” behind his name, that was not going to change.

[Reflecting on the radio interview in which Ellison called Fields a “scumbag” when Fields brought up Ellison’s failure to pay child support.]

That goes to the lows. It was a good day for me. We got media recognition, something that we always struggled with. That was the high point. We got national recognition. There’s 800 races going on in the country. It’s rare to get recognition on a national stage. But then again, you didn’t see [Ellison’s] support wane.

You had a sitting congressman who had a complete meltdown on live radio, personally attacking his opponent and you just did not see evidence that his supporters were going anywhere. So that was discouraging.

I think you need to revel in the discouragement for a while. You really do. But I don’t think to the point where you give up. Again, I think that might be the young idealist in me, but I fight to fight, not necessarily to win. I fight to hold these politicians accountable. And sometimes it’s not fair. That’s just the way it is, I guess.

Monday: LRT construction: ‘Business dropped by about 40 percent. I cried many nights.’

GOP worker on a losing campaign: ‘Frustrating but rewarding, too’