Typically, when legislative leaders and the governor meet with the media prior to the start of a session, there’s a can-do feeling of good will in the air.

Not so this time around.

David Hann, the Senate minority leader-designate, arrived at the media session with Gov. Mark Dayton and other legislative leaders with a weird smile on his face that looked a whole lot like a smirk.

Hann’s look and comments were so biting that Dayton and House Speaker-designate Paul Thissen both felt it necessary to smack down Hann, saying among other things that the Republican senator from Eden Prairie “should deal with facts.”

Of course, the big fact is that the GOP was walloped in November, giving DFLers control of both the Legislature and governor’s office for the first time in more than two decades.

In terms of most areas of legislation, Hann’s recalcitrance is without much meaning. As House Minority Leader-designate Kurt Daudt of Crown put it, DFLers “don’t need input” from the GOP caucuses to pass their agenda.

So, before going back to Hann’s attitudes toward the governor and majority leaders, let’s look at the DFL priorities.

No. 2: Job creation (presumably through another bonding bill that would start with civic projects in St. Cloud, Rochester and Mankato).

No.3: A start to restoring cuts that have been made to higher education.

No. 4: Funding for early childhood education.

Dayton was quick to add that all of this can’t happen at once.

Because of existing budget problems, he said, “we’ll have to restrain ourselves somewhat.” But he also suggested he’s tired of hearing about DFL “over-reach.”

“Any tiptoe we take, we will be accused of over-reaching,” Dayton said.

Since hours after the election, Republicans have been filling social media and news conferences with worries about DFL over-reach, he said.

Those charges, he said, are “fundraising tools [by the GOP] and just not true.”

Thissen and Senate Majority Leader-designate Tom Bakk seemed to mostly agree with the governor about priorities, although Bakk made it clear that lowering property taxes will be a high priority in his caucus. Bakk especially would like to see the state take a more active role in funding K-12 education.

Most districts, he said, have had to rely more and more on property taxes to fund public education, and that has created inequities across the state. Bakk pointed to GOP policies as the reason for large property tax increases.

There are other areas outside the budget that will create controversy in the coming session.

Both Thissen and Bakk said they know there will be bills presented that would make gay marriage legal in the state. Both also said that they believe the voters’ rejection of the Republican-led marriage amendment, which would have allowed marriage only between one man and one woman, was “the beginning of a conversation” on the subject in Minnesota, meaning a floor vote on gay marriage seems unlikely.

Both DFL leaders obviously hope that pending Supreme Court cases on the subject will clarify the issue in Minnesota.

On the subject of gay rights, it’s clear that with the DFL in charge, such things as health insurance will be available — in the near future — for state employees.

But that will not happen until the current contract, which does not respect domestic partners, is passed by the upcoming Legislature. That contract, however, will be short-lived. It ends in June. After that, domestic benefits, traditionally opposed by the GOP, will  be a part of the contract.

Sand mining for purposes of fracking also will likely become a controversial issue this session.

Currently, most of that mining is done in Wisconsin, but there already is impact heavy impact on Minnesota roads as the sand is transported to North Dakota oil fields.

At the moment, there is a hodge-podge of local rules regarding the sand mining in Minnesota, including moratoriums on mining in some areas.

Dayton compared the fracking issue to the debate over massive feedlots that dominated rural Minnesota a few years ago.

“I don’t want it [sand mining] to be like feed lots where the industry got ahead of government,” Dayton said.

Another issue that could create headlines? Legalizing medical marijuana.

Bakk, who has supported legalization for medical marijuana in the past, said he’d be supportive again.

“There are things we could do to mitigate the concerns of law enforcement,” he said. Dayton, meanwhile, has said he would defer to public safety officials on the issue.

Now, back to Hann, the new leader of the Senate minority caucus that is divided between deeply conservative members and a handful of relative moderates. Hann clearly represents the more conservative ones. (He won his leadership position in a close vote over Sen. Bill Ingebrigtsen of Alexandria.)

Hann, who was a candidate for the GOP gubernatorial endorsement two years ago, acted much like a man trying to set the table for another gubernatorial run. With either a smirk or his words, he seemed to disagree with almost every suggestion made by DFLers.

It should be noted that his attitude was in sharp contrast to Daudt, who is entering just his second term in the House. Daudt spoke of how the GOP House and Dayton had been able to work together in a number of areas last session. He said he hoped to see more of that cooperation this time around.

Dayton, however, shouldn’t expect much cooperation from the Senate, at least if Hann’s behavior represents his caucus. 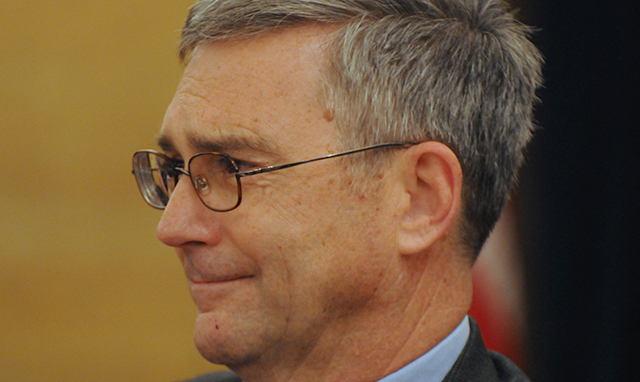 MinnPost photo by James NordDavid Hann arrived at the media session with Gov. Mark Dayton and other legislative leaders with a weird smile on his face that looked a whole lot like a smirk.

Mostly, the DFLers ignored Hann. But his interpretation of the economic forecast made by state officials last week inflamed Dayton – and even the usually laidback Thissen.

Hann told reporters that state economist Tom Stinson had said if taxes on the wealthy were raised by the feds in the fiscal cliff debate, 115,000 jobs would be lost in Minnesota.

Dayton started angrily scratching down notes on a pad of paper. When Hann, who tends toward verbosity, concluded his comments on the evils of taxes, Dayton responded.

The governor said Stinson’s references to job losses reflected what would happen if the White House and the Congress couldn’t reach agreement and the country went over the fiscal cliff.

“Let’s hope we can deal with facts,” said Dayton as he glared at Hann.

Thissen, too, jumped on Hann’s interpretation of Stinson’s dire comments about what would happen without a settlement in Washington.

For starters, Thissen said, the big damage to the economy would come if there are across-the-board tax increases. Across-the-board increases, he said, would have a disproportionate impact on the middle class and damage a fragile economy.

Thissen also said that Republicans apparently have not learned any lessons from their November defeats, which he said were caused by the GOP “not dealing with facts.”

Hann fired back. He said he was tired of hearing that Minnesota property taxes have increased because of decisions made by GOP Gov. Tim Pawlenty and in the last two years by GOP majorities in the House and Senate.

The three DFLers at the table shook their heads angrily, Daudt looked slightly shocked and Hann smiled that weird smile.

Don Davis, a reporter for Forum Communications and moderator of the event, summed everything up: