Torn-up streets in downtown St. Paul and along University Avenue reminded everyone of the coming Central Corridor light rail line. But another major transit project — a $243 million renovation of the historic Union Depot as a transportation hub  — was completed with little inconvenience, except to those living in the building’s 40 lofts.

Ken and Roberta Avidor — both artists — moved into the loft condos this year and watched (and sketched) the building’s transformation.

Ken Avidor, who also works as a courtroom sketch artist and is well known in political circles for his involvement in the Dump Bachmann blog, talked about observing the Depot’s renaissance.

It’s an odd thing: I feel at home living in a train station. It’s the most wonderful place I’ve ever lived, with the tradition and the history.

It’s like we live in a place that exists in three separate time zones. They’ve done a good job of capturing the past, that wonderful sense of the bustling train depot. You’ve got the present, where we have this amazing space [in the lobby and the concourse] that feels almost like our living room. We play board games here. And we also have that future to look forward to, with Amtrak trains and Jefferson Lines and eventually the high-speed trains.

In August when we moved in, there was still some construction going on, and even now they’re doing some jack-hammering in the basement.

While they were working on the concourse, they put a barrier up, so it seemed very dark, but every now and then, a workman would open up a door and light would flood in. We could sense the promise of the place; there was still scaffolding and the floor was cracked, but it was very clear that everyone was working very hard to make this a special place. 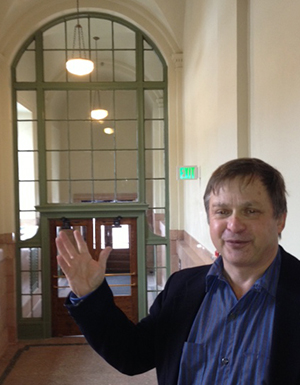 This was truly a heroic effort, so every chance I’d get, I’d sketch the workers. You have to draw them very quickly because they’re very busy. I didn’t want to bother them, but when I finished, I’d show them the sketch and I could tell they were very proud of what they did. And they should be.

We watched as they cleaned all the pigeon poop off the top off the connecting skyway.  It was deeply encrusted and they had to wear haz-mat suits.

They had to pressure-wash the building’s exterior — part of the mitigation of the pigeon problem, I think — and when they got around to our side, these two guys in a cherry picker with fluorescent vests and helmets showed up outside our window. Our cat, who’d always lived in a house before, had a really tough time with that. But he’s recovered now.

There was a lot of work on the sidewalk outside, too, as part of the light rail work. It was a tremendous inconvenience, but knowing that it would be just wonderful after they finished, yeah, it’s worth it. I’m from New York and we’re used to construction and noise, jackhammers and sirens. Sometimes this place is almost too quiet.

The disruption on University Avenue [from light rail construction] has been terrible, but the good news is that many of the business are still here. You have to kind of look ahead and visualize how wonderful it will be, and before you know it, the future becomes the present.

The first time we came into the finished concourse it was the light that amazed me – the light in this place is extraordinary from an artist’s perception. It’s so bright in here.

And when a friend who grew up in St. Paul came to visit us — she used to come to the depot when she was young to meet her grandmother — she walked in the front door and her face lit right up. She said: “I remember that echo.”

There are so many parts of the depot that are absolutely gorgeous. On the Wacouta side, there’s an entrance with wonderful vaulted ceilings and the lighting coming from the east windows is indescribable. It’s an entry off a side street but it’s like walking into a Cathedral with the vaulted ceilings and the tall windows. Clearly the architect intended that when people entered, they were awed.

This is really a special place for me, and hopefully other people will discover it as well.

Sunday: “GOP worker on a losing campaign: ‘Frustrating but rewarding, too’ “

Union Depot renovation: ‘There are so many parts that are absolutely gorgeous’