“The government wants to take our guns.”

That’s what many folks who gathered at the RiverCentre in St. Paul over the weekend for The Minnesota Weapons Collectors Association (“Our Heritage, Our Right”) believe, and the muted anger over President Obama’s proposed new gun laws was palpable, pervasive and ominous throughout the hall.

Many attendees of the two-day showcase wore American flags and hats, patches, T-shirts and other swag advertising the National Rifle Association – a timely show of solidarity with the under-siege NRA, whose gun-show booth offered $10 discounts off its usual $35 membership fee. New blood and a new urgency were everywhere; people of all ages strolled the RiverCentre floor, caressing, carrying, selling, and purchasing guns, clothes, military memorabilia, taxidermy pelts, pistols, rifles, knives, swords and other items.

Crammed together side-by-side on the cavernous floor and brimming with guns and ammunition, the vendors’ tables looked like bunkers manned by small militias. One father-son team clad in matching army fatigueware (and who appear in this MWCA promotional video) sang the praises of their specialty house Truly Tactical, and peddled enough gear to outfit an army, along with stickers that read, “Live Free Or Die,” “Guns Save Lives,” “Disarmament = Tyranny,” and, underneath a silhouette of an assault rifle, “Come And Take It.”

Which, at this mad moment, is the fear and fight of most gun owners. Last Thursday, in the wake of the Newtown mass murders, Sen. Diane Feinstein introduced a bill that would prohibit 157 specific weapons and ammunition magazines that have more than 10 rounds.  For gun owners, the proposal amounted to a declaration of war.

“That one right there would give that elite Feinstein a stroke,” cackled one gun vendor who wouldn’t give his name, pointing at a shiny black assault weapon with rounded barrels and nicknamed “Mickey Mouse.” The man nearly spit when he said “Feinstein,” and he wasn’t alone in his disdain for lawmakers in her camp.

“There are a number of anti-gun folks like Feinstein and (New York Gov. Andrew) Cuomo whose focus is on doing away with guns no matter what, and they’re more than willing to use a terrible incident like this to further their cause,” said Lonn Haas, a volunteer with Gun Owners Civil Rights Alliance, which lobbies for area gun owners’ rights.

“They’re not focusing on the root cause, which is the mental-health issues, which is what will make the most difference. That, and arming the teachers and arming the school administrators. Again, there have been studies that show when someone puts up armed resistance in a situation like that, the situation ends. We need armed people on the sites and in the schools where these things can happen.”

Over at the House Of Lumens booth, a mother-daughter team (no names, please) sold Ranger Up T-shirts celebrating the Second Amendment and gun owners’ rights (“Whatever Doesn’t Kill Me Better Start Running”; “The Second Amendment: Defending The Rest Since 1791”). Across the way and next to the NRA booth, an older gent behind the Twin Cities Muzzle Loaders Inc. booth schooled a young boy in a folksy lesson on weapons of the Civil War. He offered the boy a pellet, then pointed at a derringer sitting amidst a display of antique pistols.

“President Abraham Lincoln was shot with one of these,” said the old man to the kid, who remained unmoved. “That’s a replica of the pistol he was killed with. Now if you’re really interested, here’s our website, and you can come and learn more.”

Under a sign that read “Oak Grove Arms Law Enforcement Tactical Sales Class 2 MFG Class 3 Dealer Fires Ammunition Accessories” and above a 1994 Rod Grams for Senate campaign bumper sticker, a sticker festooned to an ammo display case said it all for many: “Right Wing Extremist and Proud.” 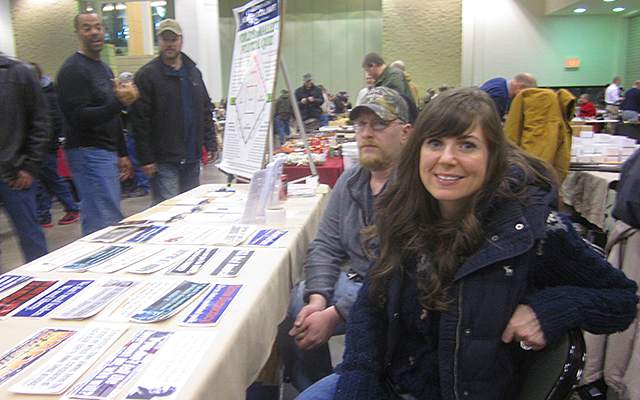 MinnPost photo by Jim WalshLibertarian Party vendor Hannah Nicollet: “There’s something about power, something about the legalized body of force that seems to bring out the worst in people. That’s why I’m a Libertarian.”

A check against tyranny

Next door sat the Libertarian Party table, which hawked periodicals and bumper stickers such as “Men Can’t Be Trusted With Guns, That’s Why Everyone Should Have One” and “Oh Boo Hoo I’m So Scared Government Please Save Me.”

“When Obama floated the rumor that he was going to do the executive order to confiscate guns, Twitter went bananas,” said Hannah Nicollet, sitting at the Libertarian Party table. “People were downright violent; ‘Out of my cold dead hands’ and ‘Let him eat lead.’ I’m not a violent person. I don’t agree with that kind of violent [talk], but you can’t talk about confiscating people’s guns.

“The Second Amendment was created to be a check against government tyranny. Do I believe that the government [could overthrow the populace]? Right now, no, because we have somewhere between two and three hundred million weapons in private hands in the United States, all over, and that is a check on government tyranny.

“Individual people don’t create holocausts. There’s something about power, something about the legalized body of force that seems to bring out the worst in people. That’s why I’m a Libertarian.”

For much of the day, a young woman unenthusiastically walked the grounds with a rifle slung over her shoulder and a sign taped to her back: “G 3 Century HK 91 For Sale.” At her side was her father, who extolled the virtues of the weapon, which he said he used for hunting rabbit, coyote, and fox outside Bemidji. He’s seen it on the Internet for $1,100, but he’d take $650.

“They’re totally accurate,” said the man, stroking the shaft of the gun. “They’re the greatest shooting gun. It’s a super soft shooter, that’s their design. They’ll make an AR-15 look like junk, because this is all H and K (Heckler and Koch) stuff from Germany.

Saturday afternoon as the St. Paul Winter Carnival parade wound its way through downtown St. Paul and gun-control activists marched on Washington, D.C., blank-faced shoppers inside the RiverCentre looked for deals and steals, and down the scopes of rifles. They pointed at the ground and ceiling and aimed at unseen targets. The murmur of voices hummed along calmly and quietly, in stark contrast to the sounds waiting to be exploded by the dormant assembled arsenal. Upstairs in Roy Wilkins Auditorium, a cat show was happening.

“People who are focused on vilifying firearms and firearms owners are the ones that are getting all the press,” said Haas. “They’re pushing forward with all these silly laws when they know it’s not going to do any good. There’s data out there showing that it’s not going to do any good, but they get away with outright lying. They get a lot of media coverage, but when gun owners legitimately help people or stop a crime, that gets pushed off to page 20 or something.”