This article was reported and written by Jeff Hargarten, Kevin Burbach, Calvin Swanson, Cali Owings and Shayna Chapel. The article was supervised by MinnPost journalist Sharon Schmickle, produced in partnership with students at the University of Minnesota School of Journalism and Mass Communication, and is the first in a series of occasional articles funded by a grant from the Northwest Area Foundation.

Call it predatory lending. Or call it financial service for the neediest. Either way, more Minnesotans are turning to high-interest payday loans and other services outside the mainstream banking system, controversial enterprises that operate through a loophole to dodge state restrictions.

On a typical morning throughout Minnesota, customers stream into any one of some 100 storefronts where they can borrow hundreds of dollars in minutes with no credit check – at Super Cash on the north side of Bloomington, for example, at Ace Minnesota Corp. on Nicollet Avenue in Richfield and across the metro on Roseville’s Rice Street at PayDay America.

The demand for these loans doubled during the Great Recession, from 170,000 loans in 2007 to 350,000 in 2011, the highest reported to the Minnesota Department of Commerce in state history.

While 15 other states forbid such lending practice, Minnesota lawmakers have been largely unsuccessful in several attempts to crack down here. Some lenders have used the loophole to charge higher rates and grant bigger loans than state lawmakers had previously allowed. And they have successfully lobbied against tighter rules.

Loan data for Minnesota provided by Minnesota Department of Commerce.

Their Minnesota borrowers paid fees, interest and other charges that add up to the equivalent of average annual interest rates of 237 percent in 2011, compared with typical credit card rates of less than 20 percent, according to data compiled from records at the Minnesota Department of Commerce. The rates on loans ranged as high as 1,368 percent.

In all, Minnesotans paid these high rates on $130 million in such short-term loans in 2011, some of it to companies headquartered outside Minnesota. That is money the borrowers did not have available to spend at local grocery stores, gas stations and discount shops.

“This exploitation of low-income consumers not only harms the consumer, it also places a needless drag on the economy,” wrote Patrick Hayes, in an article for the William Mitchell Law Review.

Now, the fast-cash loan business has expanded in Minnesota and nationwide with large conventional banks – including Wells Fargo, U.S. Bank and Guaranty Bank in Minnesota – offering high-cost deposit advances that function much like payday loans.

This is the first in an occasional series of reports exploring questionable lending practices in Minnesota and what is being done about them.

Filling a need? Or preying on the needy?

Short-term lenders and their supporters insist that their loans are helpful services in cases of emergencies and other needs for quick cash. They fill a gap for people who don’t qualify for full banking service.

“We are supplying a service that the consumer can’t get somewhere else,” said Stuart Tapper, vice president of UnBank Co., which operates UnLoan Corp., the third largest payday lender in Minnesota. 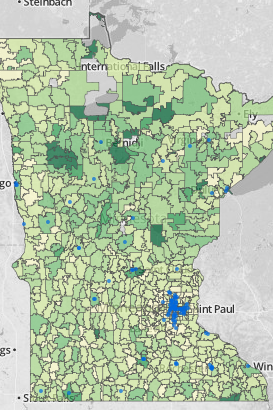 The lenders also dispute the emphasis critics have placed on annual percentage rates because borrowers can pay less in interest if they pay off the loans on time, typically two to four weeks.

However, critics say the payday lending business model depends on habitual customers taking multiple loans a year. Of some 11,500 Minnesota borrowers who obtained short-term loans in 2011, nearly one-fourth took out 15 or more loans, according to the state Commerce Department.

“Once somebody gets a payday loan, it’s a vicious cycle,” said RayeAnn Hoffman, company director of Consumer Credit of Minnesota. “You borrow the $350, and you have to pay it again in two weeks and take out another one.”

By the time Hoffman sees them, many are in deep financial trouble.

“A lot of people call me with two, three and four pay-day loans going at once,” she said.

The few-questions-asked convenience and friendly service are powerful draws, in particular to low-income people who’ve been turned away from conventional banks and who lack other financial resources.

Angelia Mayberry of South Minneapolis takes out a $200 to $300 loan from Payday America every month.

She praised the company for helping her and for its easy process.

Mayberry pays a package of fees and interest rather than the typical interest on a conventional loan. She said she doesn’t know how much interest her payments would add up to, but on its website, Payday America has listed equivalent annualized rates ranging from 228 percent to more than 700 percent.

“All I needed was a couple of references, a job and a checking account,” Mayberry said.

Payday lenders also provide other financial services. Customers go to these locations to cash checks, to send funds to various international locations and to pay bills by turning cash into checks.

The three major fast-cash lenders operating in Minnesota — Payday America, Ace Cash Express and Unloan — have dominated the state’s payday lending market for years. Together they made more than $10 million in 2011. Payday America — the largest of all — earned about $6 million that year.

None of them is licensed by the state as a payday lender.

Instead, all three are licensed as Industrial Loan and Thrift operations — a designation created decades ago by the Legislature. Initially the designation was not intended to apply to payday loans, but now it is used as a loophole enabling lenders to offer larger loans and charge higher rates to Minnesotans.

To understand that distinction, you have to go back to 1995 when the Legislature moved to minimize payday lending in the state.

It created the Consumer Small Loan Lender Act, which regulated payday lending, capping the maximum amount of an individual loan to $350. Interest also was to be limited.

“It’s very problematic,” Davnie said. “It’s perfectly legal and an abuse of the legal system at the same time.”

“Why would a payday lender not want to have that license?” said Tapper at UnBank. “Just your flexibility and what you can do is much greater with an Industrial Loan and Thrift license than it was with a small-loan license.”

Apparently, the shift was profitable. In 2011, the top five industrial loan companies issued 247,213 loans totaling $98.7 million. Among them, Payday America, Unloan and Ace Minnesota earned about $6 million, $3.3 million and $1 million respectively from 2011 operations, according to their reports to the Commerce Dept.

Meanwhile, none of the companies that chose to do business licensed under the more restrictive Consumer Small Loan Lender Act has cracked the top five of Minnesota’s payday lenders in terms of earnings.

In short, the shift to the Loan and Thrift designation enabled short-term, high-interest lending to thrive in Minnesota even though the state moved to limit payday lending – and while many other states outright banned the business.

Consumers can’t decipher between those under the payday lending act and those using the loophole.

Still, the loophole is no secret to policy makers.

One bill — introduced by Davnie and Sen. Sandy Pappas, DFL-St. Paul — would have placed all payday lenders under the original 1995 payday lending act and closed the loophole that allows for Industrial Loan and Thrifts.

A second -- introduced by Rep. Steve Simon, DFL-St. Louis Park, and Sen. Linda Higgins, DFL-Minneapolis -- would have limited interest rates for all loans in Minnesota to a 36 percent Annual Percentage Rate (APR) and allowed for borrowers to pay back loans incrementally — something not currently offered by lenders.

Neither bill made real headway. And nothing similar has been passed since.

The failed bills were vigorously opposed by the owner and CEO of Payday America, Brad Rixmann. Testifying in 2008, he told a legislative committee that proposed regulations would push him out of business and force borrowers who depend on his services to “turn to illegal and unregulated sources of ready cash.”

Rixmann is the local face of payday lending. He declined to be interviewed for this story. His company is the small-loan subset of the larger Pawn America. With at least 15 locations in Minnesota, Payday America is the biggest payday lending company in the state.

Rixmann has donated increasingly to Minnesota political campaigns, giving more than $150,000 in 2011 and 2012 for state and federal races. His company also registers lobbyists to work on issues at the state level, according to the Minnesota Campaign Finance and Public Disclosure Board. Although he’s contributed to both Republican and Democratic campaigns, the majority of donations head to Republicans.

In his testimony, Rixmann said the regulations in place were effective and that Minnesota has stronger restrictions on payday than neighboring states like Wisconsin and the Dakotas.

“The few number of defaults and complaints indicate that the current legislative and regulatory system is working,” Rixmann said.

‘Suckered into a trap’

“By definition, [payday borrowers] are the most vulnerable, financially vulnerable, in our society,” said Ron Elwood, a St. Paul-based attorney who has lobbied extensively for tighter regulations on payday loans. “And then you keep stripping assets away and it makes it virtually impossible for anybody to stay even, let alone get ahead.”

Indeed, complaints sent to the state Commerce Department indicate that some borrowers eventually are caught in a loan trap where they are hounded for payments that have snowballed far beyond their financial reach.

“They called me many times at home . . . and my cell phone,” complained a borrower from Hopkins who fell behind on payday loans, including one from Cash Central, a Utah-based company that is licensed to lend in Minnesota. (Commerce officials withheld names and other personal information on the complaints MinnPost obtained through a request under the Minnesota Data Practices Act.)

The Hopkins borrower said that after he took out the Cash Central loan he lost hours at a part-time retail job and couldn’t keep up with payments.

“I have to[o] many loans outstanding,” he said. “It is very sad that this has to happen to me, but I got suckered into a trap.”

One reason payday lending thrives is that it attracts people in Minnesota’s fastest growing population: minorities and the poor – people who often are shut off from mainstream banking for one reason or another.

Increasingly, though, Minnesotans with access to mainstream banks also are tempted to borrow through products very similar to payday loans, high cost included. The next installment of this series will report on that controversial development.