Try as they might, budget-focused DFL legislative leaders may have trouble reining in some of their caucus colleagues interested in taking up a bunch of controversial issues.

Even before Tuesday’s opening day of the session, several DFLers already were talking about pushing gay marriage legislation and tightening gun control laws.

“They want to be cautious,” Sen. John Marty said of the DFL legislative leadership. The Roseville senator, who fervently wants to repeal the state’s gay marriage ban, said: “They want to focus primarily on budget issues … I think some of them might say no this year, but I think we can deal with it this year. I don’t think it’ll take that much time.”

That’s not exactly what DFL legislative leaders wanted to hear.

After taking back both houses of the Legislature, the new leaders, backed by Gov. Mark Dayton, wanted to start with economic issues.

Since then, Republicans and others have raised concerns of potential “legislative overreach” by Democrats, given their control now of both legislative chambers and the governor’s office. Bakk and Thissen have repeatedly tried to keep the focus on the budget and on ending the partisan politics that they say handed them the November elections.

“Any tiptoe we take, we will be accused of overreaching,” Dayton said at a legislative preview event in mid-December.

DFL leaders already have a full agenda. Top of the list is solving the state’s projected $1.1 billion budget deficit, followed by such issues as implementing a state-based health insurance exchange, passing a bonding bill and considering tax reform, to name a few.

Meanwhile, others legislators plan to pursue several other hot-button issues. Here’s a look at some of them:

Since Election Day, Thissen and Bakk have awkwardly shrugged off more questions about the possibility of legalizing gay marriage than any other controversial topic.

The impressive “Vote No” campaign that led to the successful defeat of a proposed constitutional amendment to ban same-sex marriage started a statewide  “conversation” that DFL leaders plan to continue, they said. The lead group on that effort is now re-organizing to lobby the Legislature in support of “marriage equality.”

For legislators, part of that conversation appears to be going something like this: “Will legalizing gay marriage help us or harm us politically?”

So far, it’s unclear how the conversation will end, or what exactly voters meant when they rejected the amendment. The leadership has indicated that they’re watching the U.S. Supreme Court, which is hearing two cases related to same-sex marriage.

Bakk and Thissen have declined to clearly address the issue, though both are likely to support it behind closed doors. Dayton has said he would sign a bill legalizing gay marriage if lawmakers present it to him. All agree that solving the budget deficit must come first.

Even without the express support of their leadership, individual legislators plan to introduce legislation repealing Minnesota’s statutory ban on same-sex marriage with the hope of passing it this session.

Rep. Alice Hausman, a veteran Democrat from St. Paul, said she plans to introduce legislation to that effect early on to capitalize on the session’s usual slow time before the pace picks up with the release of the February budget forecast.

“In my opinion, this doesn’t require any time. It just closes the loop on the conversation,” she said. “We’re turning the corner on this issue. We’d be out of step if we didn’t move more aggressively.”

Sen. Scott Dibble, an openly gay DFLer from Minneapolis who helped found the “Vote No” campaign, said he would carry the legislation in the Senate.

The Supreme Court decisions likely would not come until June, after the session’s end.

Marty, a longtime supporter of gay marriage, agrees that a vote should come this year. He said it doesn’t have to be a big distraction that pulls lawmakers away from budget discussions.

Rep. John Lesch — chairman of the House Civil Law Committee, where a gay marriage bill would be heard first — said that his committee could begin hearings while other lawmakers worked on the budget.

“I think it is likely that something will get passed,” said Lesch, DFL-St. Paul “However if we start moving toward the end of session and we don’t have a budget … we have to solve the budget issue first and then quickly move on to this one.”

Democrats likely will move forward with a number of proposals to tighten gun regulations in response to the recent shootings in Connecticut.

Democrats have said they plan to hold hearings on the issue.

“Whenever you have a social problem, the responsible thing to do is to … get as much information as you can from all sides — and then make a decision about what legislation might be appropriate,” said DFL Rep. Michael Paymar just after the shooting. He is the chairman of the House Public Safety Committee.

However, the fate of gun control legislation this session is unclear because the issue doesn’t break along party lines. Some rural Democrats don’t favor more restrictions.

“I think [increased gun control] has a tough road, and I go back to what I keep calling the surrender mentality,” Paymar said. “I think the Legislature has surrendered to the NRA and the gun extremists, and once that happens, it’s very difficult to move a bill, as common-sense as it might be, through the Legislature.”

Democrats are now preparing to offer their answers to the voting amendment that Minnesotans rejected in November. They also may propose campaign finance and other elections changes.

Like last session, the debate on the issues looks like a showdown between those wanting to maintain voter access and those want to ensure the integrity of the voting process.

The most controversial change would allow early voting in Minnesota — currently allowed in about 30 states. DFL Rep. Steve Simon, House Elections Committee chairman, said he’s interested in considering “straight-up” early voting, unlike the current absentee system that requires voters to have an excuse. 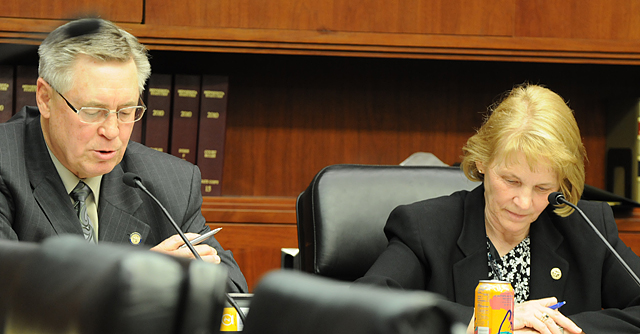 “We all know people … who tell a little fib and vote by absentee for convenience,” said Simon, who was one of the most outspoken opponents of the voting amendment on the House floor.

Simon said he plans to hold hearings before settling on a specific proposal. Early voting was extremely controversial during the 2012 presidential election because surveys of early voters allowed pundits to forecast results ahead of Election Day.

It appears that Minnesota Republicans don’t support the measure. Incoming Sen. Mary Kiffmeyer, who proposed the voting amendment when she served in the House, said she opposes early voting both because of the cost and because it doesn’t allow citizens to change their votes.

Such opposition could endanger the proposal because Gov. Mark Dayton has insisted on bipartisanship on any election law changes. That is one of the reasons he cited in vetoing the 2011 Photo ID statutory bill.

“Gov. Dayton has made clear that he wants election bills to be as bipartisan as possible,” Simon said, “So this isn’t the time for the majority party to be in the habit of constantly railroading priorities.”

Beyond early voting, Simon said his committee would likely consider “electronic poll books,” which at least address in part the voter integrity concerns that Republicans have raised. He will also consider proposals to expand the use of ranked-choice voting, address felon voting, implement online registration and move primary elections to June.

Simon said raising campaign spending and contribution limits likely would come up early in the session. What’s nearly certain, however, is that the voting amendment will stay buried for the next two years. In fact, there might actually be a proposed constitutional amendment that would raise the standards required to change the state constitution.

“I’m always happy to work with [Kiffmeyer] … I don’t know what kind of support there is out there,” Simon said, referring to the voting amendment. “There will be no bipartisanship when it comes to simply carbon copying what was in the constitutional amendment.”

The governor himself chose frac sand mining as one of the big issues to watch this session.

DFL lawmakers are concerned that silica sand mining, which is used in hydraulic fracturing for oil and natural gas, damages the environment and harms air quality in Minnesota’s communities.

Marty, chairman of the Senate Environment and Energy Committee, said he hopes to fill in some of the regulatory holes that are emerging in an industry that “popped up almost overnight, it seems.”

Trucks hauling dust could be having a huge impact on small Minnesota communities, Marty said, adding that the silica mining could scar the environment and pollute groundwater in ways that we don’t currently understand.

“We want to make sure the environmental process works for this new industry,” Marty said, echoing Dayton’s concerns.

The Legislature also is likely to consider an important data privacy issue this session that especially affects Minneapolis residents: the handling of license plate data.

Several police departments use stationary and vehicle-based license plate readers to track stolen cars and to identify vehicles that have accumulated multiple parking violations. The reader data also are used to identify cars that were used in commission of a crime.

Some privacy advocates and government officials are concerned that the license plate data are public and would require a state law change to privatize. Others wonder why police departments are storing the data at all.

Minneapolis, for instance, keeps the data for three months, while St. Paul only holds onto it for two days. The patchwork of policies across the state leads to wide discrepancies among municipalities.

Sen. Dibble considers the license plate data the height of “governmental intrusion and overreach” and says, “I think that they should banish them to the thin air.”

Another controversy from last session — using electronic pull-tabs to finance the state share of the Vikings stadium — will be back for a second round of debate.

Lawmakers learned in November that electronic gambling revenues were coming in at about half the projected rate. Revenues for fiscal year 2013 were reduced from $34 million to $16 million. The state’s cushion now is projected at $47 million — rather than $83 million — by the end of 2017.

Dayton reassured the public that he isn’t concerned about adequate funding for the state’s $348 million share of the stadium.

“What I learned additionally from Management and Budget is that the bill provided for a reserve fund that would be the first thing affected if the revenues were to consistently fall short,” Dayton said. “That hasn’t happened yet, but there’s a cushion there — more than enough to cover whatever start-up glitches there may be.”

DFL Rep. Joe Atkins, House Commerce Committee chairman, has scheduled a mid-January hearing to learn more about the revenue drop. He says that “the current revenues are not necessarily an indication of failure.”

Atkins also said he wanted to hear about proposals to put electronic pull-tabs at the airport and in grocery stores.