The Minnesota Legislature’s incoming minority leaders — David Hann in the Senate and Kurt Daudt in the House — will operate at a distinct disadvantage, given the DFL control of both chambers and the governor’s office. But their leadership styles and experience, a study in contrasts, could help Republicans maintain relevance.

Hann, the state senator from Eden Prairie, brings to his fourth term a reputation as both a policy expert and a conservative ready to do battle. Daudt, a second-term legislator from Isanti County, is praised for his political instincts and for an appreciation of the importance of the message.

Pat Anderson, a former state auditor and current lobbyist, served with Daudt on the party’s executive committee. “He understands the process,” she said. “He’s willing to get some bipartisan legislation.”

Hann, she says, will actually be involved in crafting the budget. “Hann has an excellent grasp of policy, especially the budget for human services.”

Both men talk about shaping the new state budget with its billion-dollar shortfall with the same goal, albeit with different rhetoric.

“Our priority is going to be balancing the budget. We have a track record of doing that without a tax increase,” Daudt said.

“If the Democrats push a tax increase and this puts us in the position of hurting the economy, we have to be truthful and say these are wrong choices,” said Hann.

The two leaders do not know each other well. “We have slightly different personalities,” Daudt admits. “I have a reputation as a consensus builder.”

They agree, though, that the first test of Republican input will come with legislation to establish a state health care exchange, the online market mandated by federal health care reform law that will allow consumers to compare the costs and features of various kinds of health care coverage. Daudt describes the legislation as a “bellwether” and opportunity for cooperation.

“We don’t support Obamacare, but it is the law of the land,” Daudt said. “Republicans, we want it to be a more market-driven solution.”

While Daudt holds out hope for collaboration, Hann is skeptical. “Our concern is whether there is a strong private-sector insurance market, but you’ve got bills out that call for the private sector to be eliminated from the exchanges,” he said, referring to a comment that Roseville DFL senator John Marty made at MinnPost that he prefers advocates, rather than industry professionals, to lead the exchange. “We’re not going to participate in that.”

Hann, professionally, has an indirect relationship with the insurance industry. He is a partnering agent with a company that offers financial consulting, including insurance plans, to businesses.

With a Senate Republican caucus still directionless, Hann’s bluntness and force will be a factor in whether he can pull members into a strong political position, not just opposition.

Former Senate Majority Leader Amy Koch, whom Hann pressured to resign her post because of an affair with staff member Michael Brodkorb, recalls playing board games with Hann. “David Hann is outstanding at Trivial Pursuit,” she said, as a compliment to his knowledge base.  “He is not impressive at [the strategy game] Risk.” 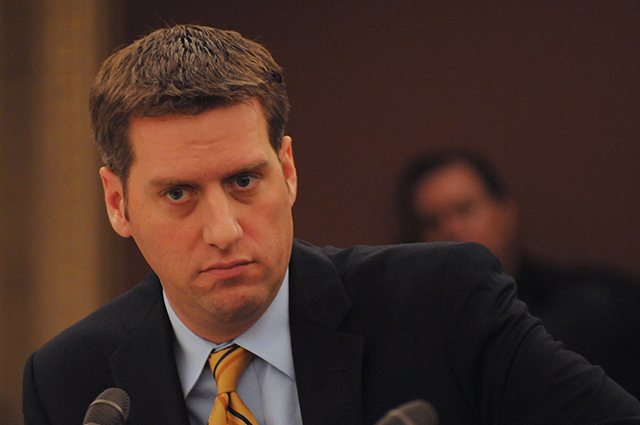 MinnPost photo by James NordHouse Minority Leader Kurt Daudt: “Our priority is going to be balancing the budget.”

Minority members still have an important role in legislative negotiations, provided they offer a unified front.  Gov. Mark Dayton has suggested he would like to see a bonding bill this session, legislation that requires a three-fifths majority vote and would need Republican support.  If both Hann and Daudt manage their caucuses successfully, yes votes could lead to greater Republican influence in other legislation, such as tax reform.

“I think there is an appetite for reform among Republicans,” Hann said. “If there’s an interest in tax reform, there are a number of Republicans that would be willing to participate.  Maybe there’s a way to broaden the sales tax and reduce income tax rates.”

Hann’s attentiveness to policy seems to signal he may use his leadership as a springboard to a run for governor. “All I will say is that my focus is leader of the caucus,” he replied to a question about future ambitions. “There is going to be another election in two years, but at this point, my focus is on the caucus.”

Daudt, however, does have his eye on Republicans retaking the House. “We are looking forward, looking at our role over the next two years,” he said. “Our caucus is upbeat and looking forward to 2014.”

But first, there is the 2013 legislative session, with one-party control for the first time in more than 20 years. And even though DFL leaders have pledged to not overstep, they are sure to push back at any suggestions that Republicans will return to dominance. And compromise and consensus will be at the call of the party in control.