Revenue Commissioner Myron Frans, the man responsible for helping to create the Dayton budget/tax proposal, is citing an unusual authority these days.

“Tyson used to say that everybody has a plan until they get punched in the mouth,” Frans said Tuesday.

Frans made his comment after testifying before first the Senate and, then, the House tax committees, where he received some political punches.

The questions, mostly from Republicans, were not at all friendly.

In fact, one of the comments made during the Senate hearing by Julianne Ortman, R-Chanhassen, was considered so unfriendly that Gov. Mark Dayton responded a few hours later at a talk he gave to a meeting involving people with the Minnesota Credit Union Network at St. Paul’s RiverCentre.

“I can’t imagine why we would take sales tax dollars out of the pockets of middle-income and poor Minnesotans just to write a check to property owners in the state,” Ortman had said to Frans during the early-morning Senate Tax Committee meeting. “I don’t know why we would do that unless it looked like — forgive me for being cynical — a re-election plan.”

Frans, who takes punches well, was calm, saying the $500 property tax rebate in the governor’s proposal is in direct response to complaints from Minnesotans about property taxes, which have increased by more than 80 percent in the last decade.

Dayton, who either was directly watching the hearing on television or heard about Ortmann’s comments shortly after they were uttered, was said to be very upset by the cynicism.

He dispatched a staff member to the area of the Capitol where reporters are hunkered down. The
reporters were told that Dayton would have a response to Ortman at the Credit Union event.

Reporters who did attend were expecting a gubernatorial explosion, but Dayton’s remarks seemed relatively mellow.

“If somebody has a better idea, step forward,” the governor said. “If people want to sit back and carp and deny people a $500 property tax rebate, they’re sure not in touch with people I hear from every day and talk to every day.”

Since Dayton made his budget/tax reform proposal, the administration has been taking blows from a wide variety of people.

But Tuesday, the tax committees got their first chances to get directly into the ring. Republicans came out swinging, though it was pointed out that the governor’s broad outline still hasn’t been turned into an official legislative bill.

During the House committee hearing, Rep. Greg Davids, R-Preston, even expressed grave concern over the fact “that we’d be taxing sick puppies and kittens.”

You see, under the proposal, veterinarians would be required to charge a sales tax to kitten and puppy owners for services rendered. (It should be noted that owners of cows and pigs would not have to pay a sales tax on the vet services.)

Republicans pounded on the idea that the top 2 percent of income earners in the state, who would be taxed at a newly created fourth income tax tier under the plan, are “the job creators.” 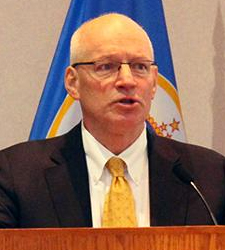 Office of the GovernorMyron Frans

Frans was unable to answer that question. But, citing a 2008 study, he did come at the question from a different context. The study showed total income earned in Minnesota in that year was $173 billion. Of that amount, the top 10 percent of the earners received 42 percent, or $73 billion. They paid 37 percent of the taxes, meaning the 90 percent paid a higher percentage of taxes.

Rep. John Lesch, DFL-St. Paul, did use the study to toss a few softballs to Frans about tax fairness. Lesch went so far as to suggest that if those who receive 42 percent of the income should pay 42 percent of the taxes if fairness is a goal.

“Change is difficult,” Lesch said at the end of his comments directed at GOP members of the panel. “But you learn in basic training, you have to do hard right instead of easy wrong.”

Mostly, though, Frans was taking punches. Typically, he smiled and suggested that if Republicans had a better plan to both solve the deficit and invest in education from pre-K through college, the governor was interested in listening.

Once in a while, though, a GOP comment would cut a little too deep and Frans would swing back.

Rep. Steve Drazkowski, R-Mazeppa, is one of those pols who can irritate DFLers simply by walking into a room.

“In your models,’’ Drazkowski asked Frans, “have you modeled for all those jobs that will be leaving? Did you model for a decrease in revenue?’’

“There is no credible evidence of people leaving a state because of tax increases,” Frans replied, adding that the lowest-taxed states tend to have the lowest standards of living.

Businesses, Frans said, are more concerned with an educated work force, a transportation system that works and government stability and predictability than tax rates.

After his testimony, Frans acknowledged that he and the governor had known that pushing this plan forward would be hard work. But they didn’t know there’d be such a steady flurry of punches to the mouth.