On a night when most expected that the governor would deliver a short speech, essentially repeating his budget/tax proposals, Dayton turned his State of the State address into a strong message reflecting his progressive values.

Sure, there was a lot of budget talk. And there was a nod of approval for the big Mayo Clinic project, which could involve $500 million in state funds.

There even was a suggestion that next year, there should be an “Unsession” for the Legislature; a time when that august body would work only on bonding bills and emergency legislation but mostly on getting rid of unnecessary laws and regulations.

But the biggest surprise of the night came when Dayton even took on the controversial issue of gay marriage:

“Let me mention one other cause, which is controversial but consistent with my faith and my principles and, more importantly, consistent with this country’s founding principles and its Constitution,” Dayton said deep in his 43-minute speech. “I believe that every Minnesotan should have the freedom to marry legally the person she or he loves, whether of the same or other sex.

“Last year, Minnesotans began a conversation about why marriage matters and we found our common belief that it is about love, commitment and responsibility. I want Minnesota to be a state which affirms that freedom for one means freedom for everyone and where no one is told it is illegal to marry the person you love.”

DFL House and Senate members leaped to their feet, applauding this unexpected moment in the speech as did most of the spectators in the House gallery. Republicans simply stared ahead.

It is safe to assume that both DFLers and Republicans were surprised at Dayton’s decision to insert this subject into this speech.

How surprising was the development?

Just before the governor entered the chamber, Sen. Scott Dibble, DFL-Minneapolis, who had been a leader in the fight to defeat the marriage amendment that Republicans had placed on the ballot a year ago was asked if he thought Dayton would bring up the marriage discussion.

“I hope so,” Dibble said, “but I don’t know. I should say I won’t let myself be disappointed if he doesn’t bring it up.”

But gay marriage — and the governor’s passionate endorsement of it — was not the only surprising development in the speech.

He devoted a substantial section of the speech to environmental issues.

“A healthy life starts with, and depends upon, clean air to breath, clean water to drink, protected natural environments to enjoy and a secure ecological future,” the governor said.

“No one can endure the severe droughts or floods of recent years; endure (or, some, enjoy)
our milder, snow-scarce winters; lather on sunscreen to walk outdoors without being greatly alarmed. … Even more alarming is that our state and our nation are still not doing enough to reverse this path toward global catastrophe.”

At that point in his talk, he acknowledged Arctic explorer Will Steger, who was in the crowd, and former state Sen. Ellen Anderson, a strong environmentalist. The acknowledgement of Anderson was a dig at Republican senators, who last year had refused to confirm her
to be the head of the Public Utilities Commission.

But then, there were a lot of digs at Republicans.

Rep. Greg Davids, R-Preston, said this was the most “pathetically partisan” State of the State speech he’s heard in his 21 years in the House.

“This was ‘Gov. Divisive’ at his worst,” Davids said. “He’d rather talk about gays getting married than jobs for Minnesotans.”

Before the speech, Davids had shown how he scores State of the State speeches. He drew a line down the center of a sheet of paper. On one side of the dividing line he has the heading “Good.” On the other side, “Bad.”

This speech, he said, was the first time he had nothing marked on the “Good” side.

In truth, Dayton did lay it on the line to Republicans, and he didn’t just take his shots at Minnesota Republicans. He also had a special blast at the Wisconsin GOP. 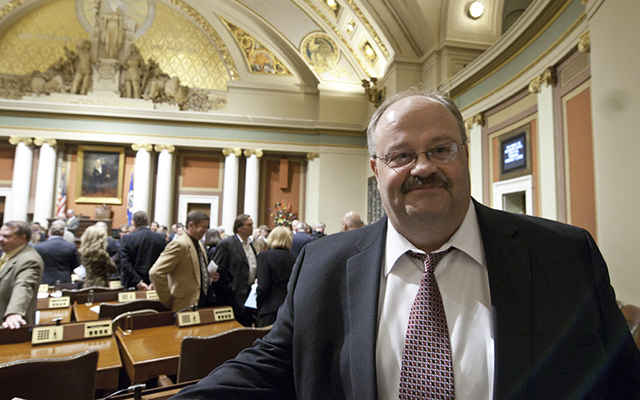 MinnPost photo by Bill KelleyRep. Greg Davids, R-Preston: “This was ‘Gov. Divisive’ at his worst.”
On Monday, a Wisconsin Republican legislator, Rep. Erik Severson, had
released an “open letter” to Minnesota businesses, inviting them to Wisconsin to get away from Dayton’s tax proposals. Previously, Wisconsin Gov. Scott Walker had made similar disparaging remarks about Dayton policies.

Dayton mockingly returned fire in his State of the State address. As always, he was making the point that relatively high rankings in taxes don’t determine how successful businesses are.

“Minnesota’s job growth in 2012 was the 12th best among all 50 states,” Dayton said. “We outperformed three of our four neighbors. Iowa ranked 30th best; South Dakota was 44th and Wisconsin, which by the way is open for business, helped bring up the rear at 42nd. And help spread the word across the St. Croix. Their unemployment rate last month was 20 percent higher than ours, while our per capita income was 12 percent higher than theirs.”

Certainly, much of the speech was devoted to his plan to raise $2 billion in new revenues with a combination of a fourth income-tax tier and a broadened but reduced sales tax.

And, as expected, Republicans called those ideas “job killers.” In fact, Republicans claimed they should receive the credit for Minnesota’s relative prosperity in the last two years.

But Dayton knew the job-killer argument would be made. It always is.

In his speech, he tried to pre-empt that with references to his family’s business background, which by all accounts was pretty successful.

“I have a respectful, but strong, disagreement with some of the other elected officials here tonight about the value of public investments in, and incentives for, economic growth,’’ Dayton said. “My father and uncles taught me the paramount importance of continuous private and public investments in improving the communities in which people work and live. In my job, I apply that principle to the ‘community’ of Minnesota.’’

It should be noted that most of Dayton’s family members were Republicans.

But there was no surprise in any aspect of that argument. The lilacs and the tulips will have gone through their bloom while the debate will still be rumbling through the legislative chambers.

The surprise here was the places Dayton took his State of the State speech.

Again, go back to Davids, the Republican who last year headed the House Tax Committee.

Before the speech, Davids assumed that Dayton wouldn’t get into such areas as gay marriage. In fact, Davids was laughing about how DFLers have “fallen into the trap” of such issues as gun legislation and gay marriage.

“You would think they would have learned from watching us,” said Davids, referring to how the GOP buried its message on conservative fiscal values by wandering into controversial fights over gay marriage and new forms of voter identification.

Although Dayton’s comments on gay marriage did receive huge roars of support from DFL legislators, the caution of House Speaker Paul Thissen and Senate Majority Leader Tom Bakk afterward was instructive. They are concerned that the subject could detract from balancing the budget.

Bakk said Dayton’s comments on gay marriage represented “his very sincere, very honest feelings. I think it was included because he feels so strongly about the subject personally.”

But, Bakk added, there’s “nothing he can do about it” legislatively. It will be up to state legislators whether to rewrite Minnesota law to allow gay marriage.

“Many things will be considered this session,” Bakk said.

Thissen was just as cautious about an issue that could overwhelm all other subjects.

It was also instructive that the governor was very cautious about gun legislation, the other issue that stirs the passions of so many. He addressed violence in his speech, but not guns. His suggestion was for more after-school programs, perhaps financed by the private sector.

Politically, going where Dayton went in this speech may not have been as high risk as it might seem. DFLers, it should be remembered, reclaimed the Legislature by storming through the socially progressive, fiscally conservative suburbs.

Although Dayton’s tax/budget plan may be difficult for some of the more moderate DFL legislators to take home to such places as Eagan and Edina, support of gay marriage and the environment likely play well.

Republicans, of course, don’t see it that way. Many were proclaiming that this speech would be the kickoff to the GOP effort to regain control in the House and the governor’s office.

Meantime, though, DFLers who had expected to be critical of Dayton’s speech were inspired.

Sen. John Marty, DFL-Roseville, who ranks as one of the state’s most liberal pols, had expected not to necessarily approve of things the governor would say.

But he crumpled up a list of “talking points” he’d prepared as he left the House floor.

“That was a good speech,” he said.

Dayton delivers ‘surprises’ throughout State of the State speech