Democrats are moving forward with measures to expand access to voting, but it’s unclear if GOP lawmakers are coming along with them.

Without Republican support, it’s unlikely that Gov. Mark Dayton will sign off on the proposals – mainly early voting and “no-excuse” absentee balloting – that DFLers have put forward this session.

Dayton has insisted that election legislation be passed with bipartisan cooperation before it hits his desk. Republicans, though, haven’t offered much hope for a clear path forward on Democrats’ priorities

It’s one area where the DFL legislative takeover might produce little or no action. When Republicans were in charge last session, they bypassed the governor’s call for cooperation by sending a voting procedures constitutional amendment to the ballot along party lines.

“We have a particularly unique situation in that we need to garner bipartisan support for these proposals and so as much as the Republicans want some things, Democrats want other things, and so I’m hopeful that in the end we can get a package put together that both sides can be happy with,” said Assistant Majority Leader Katie Sieben, who chairs the Senate committee that deals with elections.

That committee heard the early voting and no-excuse absentee balloting proposals on Wednesday, and several key Republicans walked away with serious concerns. They criticized the measures for focusing on voter access while neglecting election integrity in Minnesota.

The early voting plan would allow people to cast a ballot in person beginning 15 days before an election. No-excuse absentee balloting would remove current requirements that voters provide a reason why they can’t appear at their polling places on Election Day. It’s unclear how much either plan would cost.

“The sad thing is, neither of them increase the integrity of the election,” said Sen. Mary Kiffmeyer, a former secretary of state who authored last session’s failed Voter ID constitutional amendment in the state House.

“You need to have integrity with these things, and if you haven’t addressed that, you’re just not going to get our support,” she said of courting Republican votes. “So, if you want to keep playing that old game of just putting things forward that don’t take into any consideration those things, then you’re not going to get the support.”

Sieben said after the hearing that she hasn’t considered exactly how bipartisan the bills must be to earn the governor’s signature. “I haven’t really thought about it extensively,” she said, “but bipartisan means you have Republican support for the bill.”

So far, GOP lawmakers appear less resistant to no-excuse absentee balloting than straightforward early voting. Republicans on the committee voiced fewer concerns about the measure — lawmakers note many Minnesotans already “fib” when they currently fill out absentee ballots — and a GOP-aligned testifier said he had less serious problems with that bill than with early voting.

The House Elections Committee considered the expanded absentee voting proposal late last month, but Republicans there were difficult to read. 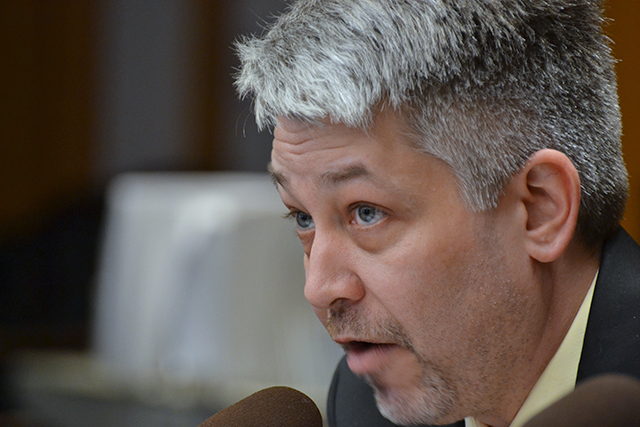 MinnPost photo by James NordMinnesota Majority President Dan McGrath: “I don’t believe there is any way to make this bill workable.”

Sieben said she was willing to work with members of the elections committee to address concerns they might have with the proposals. Both bills will become part of a larger package that the DFLer from Newport hopes will take shape next week.

“Those are some of the biggest, splashiest proposals, if you can call election stuff splashy,” Sieben said with a laugh.

Supporters of both plans say they would coexist well in Minnesota’s election system. Early voting provides the benefit of rejecting improperly filled out ballots, but doesn’t allow people to alter votes once they’re cast. Absentee balloting allows voters to change who they cast their ballots for, but is more expensive for local governments.

A string of testifiers representing organizations ranging from the AARP to the League of Women Voters voiced support for the bills.

Margot Imdieke Cross, with the Minnesota State Council on Disability, said that in the November elections several voters confined to wheelchairs had to wait in the rain for more than an hour before they were able to get indoors.

“Early voting would have provided an excellent option to those long lines and to those very wet voters,” she said.

But, returning to traditional battle lines, Republicans pushed for increased standards to protect the integrity of Minnesota’s elections. Many of the key players in the voting amendment fight from the last two years sit on the Senate committee.

“My principal concern about the early voting is to protect the integrity of the system, such that we are not going to have a system in which people are going to vote twice, or they’re going to somehow scam the system,” Sen. Scott Newman, chief author of the voting amendment in the Senate last session, told the committee. “How do we protect ourselves against those who are going to try to beat the system?”

Likewise, the key group that pushed for the voting amendment, Minnesota Majority, opposed both plans.

“I don’t believe there is any way to make this bill workable,” Minnesota Majority President Dan McGrath, who helped draft the voting amendment, said of the early voting measure.

McGrath also questioned the constitutionality of the proposal, a concern that Sieben quickly dismissed. But Kiffmeyer and Sen. Warren Limmer, a Republican from Maple Grove who offered a Voter ID bill in 2011, pushed for more answers about whether the state constitution – which designates a single Election Day – would allow for early voting.

Republicans’ emphasis on voter fraud — which neglected all of the DFL’s concerns about election access — reminded DFL Sen. Dick Cohen of last year’s partisan struggles over the voting amendment, and he noted many of the key players sit on the committee. “It struck me listening to some of the testimony … that it’s a revisiting of a lot of the issues relative to Photo ID, not so much early voting,” Cohen said. “I can’t quite wrap my arms around why early voting would be … rife with problems.”