At least one piece of firearm legislation appears to be gaining support at the Capitol as lawmakers continue working to build a package of measures aimed at reducing gun violence.

Support is emerging for the “prosecutors’ bill,” but it appears unlikely at this point that controversial proposals for bans on so-called assault weapons and high-capacity magazines will go anywhere.

Senate legislators began hearing proposals — including a universal background check bill and a measure pushed by prosecutors to strengthen certain criminal penalties — on Thursday as their condensed version of ‘Gun Week’ commenced. No votes or amendments were taken.

DFL-backed proposals that have been floating around since the beginning of the session are starting to take shape. Many of the measures face entrenched resistance from gun-rights advocates — who have protested them in force in the House — but lawmakers are making headway on one plan and look poised to move on several others.

The goal is to combine a set of individual bills into a broader gun-violence prevention package that could emerge by the first week of March. So far, it’s unclear exactly which pieces of legislation will make the cut.

One of the main gun-rights groups that rallied protesters to oppose expanded firearm regulations has been working with the backers of the prosecutors’ bill. The legislation aims to keep guns out of the hands of juvenile offenders and allow local prosecutors to go after ammunition possession, as well as stop gun transfers to felons.

“We have been working with the Hennepin County Attorney’s Office with regard to this bill,” Joseph Olson, president of the Minnesota Gun Owners Civil Rights Alliance, told the committee. “I believe that we have an agreement that will eliminate our concerns, and so at this point we have no objections to the bill.”

Olson indicated previously that his group was willing to work with DFL lawmakers on the legislation when the House Public Safety Committee considered gun-control proposals in early February. The organization, though, has stopped short of endorsing the plan outright.

Hennepin County Attorney Mike Freeman, who helped craft the legislation, painted it as a practical tool for prosecutors to go after criminals who consistently re-offend with firearms.

“We have tried to narrowly tailor this to things that we know can make a difference, giving us, the prosecutors, the capacity to take some folks who have already shown that they’re either a danger to themselves or others … and do something about that,” Freeman said.

It was the single area on Thursday where gun supporters and opponents found a measure of common ground. Sen. Ron Latz, chairman of the Senate Judiciary Committee, noted that the charged atmosphere around gun legislation makes it difficult for the two sides to work together — even on relatively benign proposals.

“If it were not caught up in the broader gun control debate, it would pass overwhelmingly off the Senate floor,” said Latz, who sponsored the prosecutors’ proposal and presented it to the committee on Thursday. “I encourage members to give strong consideration to the provisions.”

Acknowledging the deep gulf between both sides of the gun debate, Latz dismissed two of the most controversial measures that House lawmakers considered earlier this month — bans on so-called assault weapons and high-capacity magazines.

His decision to block both measures was practical — neither appears to have the political support to move forward, even with DFL majorities in both chambers of the Legislature.

“I think it was pretty clear from the House hearing and from other public commentary that those were the provisions that had the least amount of consensus within the citizenry and also within law enforcement,” Latz said after the meeting finished, emphasizing that the Senate wouldn’t hear either measure even if House lawmakers brought them forward in conference committee as part of a larger gun control platform.

“The Senate’s not going to consider it,” he said. “I think we’d be very hard-pressed to agree to anything we haven’t had a hearing on. As a matter of protocol, we don’t do that.” 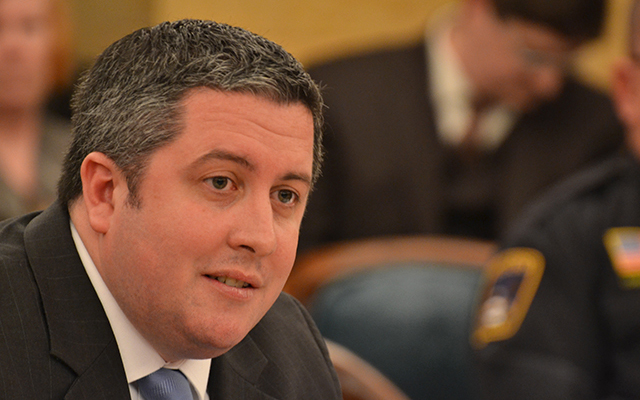 MinnPost photo by James NordChris Rager, a lobbyist for the National Rifle Association: “There’s one overarching reason — a lot of folks just don’t want their firearms tracked, taxed or taken.”

GOP Sen. Julianne Ortman said the pledge might have assuaged some of the tensions that surround the push for gun control measures since the Newtown, Conn., shootings in mid-December.

Testimony at the Minnesota House hearings earlier this month expressed opposition to the proposed bans, which have drawn more public attention than most other measures.

“I am glad that [Latz has] done that and set a record straight because I think the bills that were actually heard in the House really got people very upset,” Ortman said on Thursday night, after the committee heard about two and a half hours of public testimony.

Despite Latz’ assurances that weapons and magazine bans are off the table, the divisions during Thursday’s hearing ran deep.

The pro-gun forces turned their testimony toward fighting a bill that would require a background check for all firearm purchases, ending the so-called “gun-show loophole.”

Sen. Bobby Joe Champion, a DFLer from Minneapolis, said his bill would curb violence by keeping guns out of the wrong hands. It would require many of the private firearm sales that are currently unregulated to go through a licensed firearms dealer, who would perform a federal background check that’s standard on almost all gun purchases.

“Background checks are the only systematic way to stop people from buying firearms who are not allowed to have them — and to be able to stop the gun trafficking that plagues our communities,” he said.

The bill also aims to keep firearms away from those who go to a private mental health facility, rather than be committed by the state.

Gun supporters at the hearing pushed back hard.

They disputed the existence of the gun show loophole, laid into new fees for gun transferee permits and accused Democrats of implementing the first stage of a firearm registration system – one of gun-rights advocates’ nightmares.

“There was a question as to why don’t gun owners support … the so-called universal background checks?” said Chris Rager, a lobbyist for the National Rifle Association. “There’s one overarching reason — a lot of folks just don’t want their firearms tracked, taxed or taken.”

Champion denied the background check bill is intended to create a registry. Unfortunately for gun opponents, though, the controversy could be enough to hobble the measure, which is one of their key priorities.

It’s also an area of overlap between the House and Senate, which makes it ripe for inclusion in a piece of larger gun legislation. Heather Martens, executive director of Protect Minnesota, an anti gun-violence group, said during the House hearings that a universal background check bill would “be a focus for the committee.”

Martens, who has worked with Democrats to craft gun control legislation in the past, said she expected to see it in a final package.

Conventional wisdom around the Capitol suggests that urban and suburban Democrats — the most ardent backers of stricter gun regulations — won’t be able to pass all of their priorities through the Legislature along party lines.

The strength of the gun lobby, the grass-roots network of vocal gun enthusiasts and the combined opposition of Republicans and rural Democrats to many restrictions mean Latz and others likely have to pick their battles.

The Senate is set to consider a variety of other bills Friday afternoon. They include measures that the NRA supports, such as a crackdown on “straw purchasing” and less popular provisions among gun supporters, such as a bill that would grant police more leeway when issuing permits to purchase and carry guns.

The committee will also hear a single pro-gun proposal on Friday from GOP Sen. Sean Nienow — a resolution urging federal lawmakers to respect the Second Amendment. At least three Republican senators had plans to present other pro-gun bills, but ultimately withdrew them.

After wrapping up public input on the proposals, Latz said he would sit down and craft a bill — in consultation with Paymar — to bring back to the committee for its consideration.

That’s when the real fireworks will start.

Even the format of the legislation could affect its chances. Ortman, the Republican senator, criticized Latz for combining the bills into a single package rather than keeping them separate.

“I think that’s terrible,” she said. “It’s one of the reasons why you see so many people here that are nervous about what the unknown is and what’s going to be in a package that’s an omnibus bill. And so I think that it would serve everyone much better if we just had a straightforward up or down vote on each of the bills as they come forward.”

The Gun Owners Civil Rights Alliance, for example, would prefer that the prosecutors’ bill be a stand-alone measure. Ortman said she removed her name as a co-author of the legislation because of her concerns with the overall format.

Whether that ends up tanking the whole effort remains to be seen.

“I think that we probably could build very widespread support for some of these bills,” Ortman said. “But when you start adding in more and more, it’s going to get more and more complicated, more divisive, more polarizing and it will create an awful lot of conflict that we don’t need to have.”