A national momentum toward the acceptance of gay marriage is changing the tactics of Minnesota opponents.

With the imminent introduction of bills legalizing gay marriage, some Republicans are saying privately that they may counter with a call for less-sweeping legislation, such as recognition of civil unions or reciprocal benefits for couples.

Republican legislators are said to be considering the change in tactics, partly from personal conviction and partly as a response to the party’s drubbing for its support of the marriage amendment.

“I think there would be some people, Republicans, interested in some alternatives,” said Tom Prichard, executive director of the Minnesota Family Council, which opposes gay marriage and took part in unsuccessful efforts last year to pass a constitutional amendment defining marriage as an union between a man and woman.

Prichard said the Family Council would continue to oppose legislation that, in his words, is “marriage by another name.” He said legislation creating the status of civil unions is problematic, “depending on how you define things.”

He contends that a law allowing reciprocal benefits to partners who cannot marry under the law — gay couples and siblings, for example — is a fairer way to address the issue.

“It would cover any two people who cannot marry but who care for each other,” he said.  Prichard described a package of benefits, offered in other states, that protects inheritance, property, and visitation rights.

According to the National Conference of State Legislatures, eight states, including Wisconsin, give non-married couples the right of reciprocal benefits, to varying degrees.  The most expansive benefits are offered in California and Hawaii.

In Wisconsin, which has a constitutional amendment defining marriage as a male-female union, registered domestic partners have inheritance and survivor protections, family and medical leave, and medical and hospital visitation rights.

A Republican senior adviser to Minnesotans United for All Families, who prefers to remain unnamed, said a counter-offer of civil unions would be a non-starter for the gay marriage movement, which now sees a sea change in attitude. 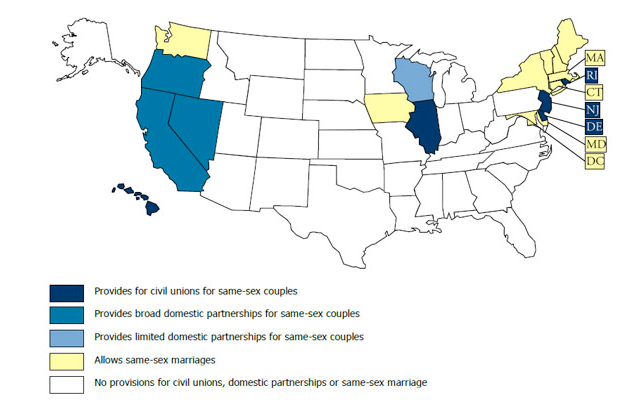 “Five or 10 years ago, that would have been extraordinarily welcome,” said the adviser, who nonetheless appreciates the politics.  “The genius of that kind of move would be to allow more moderate Republicans and conservative Democrats to say we support it.”

DFL leadership in the House and Senate and Gov. Mark Dayton had indicated they wanted the gay marriage debate to take place later in the session, after substantial work on the 2014-2015 state budget.

The go-slow approach, though, has found no traction among gay marriage supporters.

Jake Loesch, communications director for Minnesota United for All Families, the lobbying group for the bill, confirmed that two DFL legislators from Minneapolis — Sen. Scott Dibble and Rep. Karen Clark — will introduce the legislation, which would go to the Judiciary Committee in the Senate and the Civil Law Committee in the House.