This article was supervised by MinnPost journalist Sharon Schmickle and produced in partnership with students at the University of Minnesota School of Journalism and Mass Communication. It is one in a series of occasional articles funded by a grant from the Northwest Area Foundation.

“They have been harassing me at work and I have indicated to them on several occasions that I can’t receive non-emergency calls at work and they are quite aggressive . . . threatening to send a constable to my job to serve me papers,” a St. Paul resident complained.

“I hope their harassment stops soon,” a Shakopee resident wrote.

Minnesota authorities haven’t released names of the dozens of state residents who have filed complaints about online payday lenders.

However, they have launched a crackdown against predatory lenders who operate from Malta, the West Indies and other far-away places to lure borrowers into loans with annualized interest rates topping 1,500 percent – and, even, into granting access to bank accounts, paychecks and other personal financial information that all too often falls into the hands of scam artists.

Most web-only, fast-cash companies operate illegally when lending to Minnesotans because, with a few exceptions, they have not obtained the required state licenses and they violate state rules such as caps on interest and fees they can charge.

“Unlicensed Internet lenders charge astronomical interest rates, and many consumers who have applied for loans on the Internet have seen their private information end up in the hands of international criminal fraud rings,” Minnesota Attorney General Lori Swanson said in a statement.

“People should not take out loans from unlicensed Internet lenders, period,” she said.

Expanding in tandem: industry and fraud

The Great Recession left Americans scrambling to solve personal financial crises and find new means to scrape by. For some, that meant turning to small payday loans.

Until recently, those borrowers typically walked into a physical storefront. But that’s changing as lenders aggressively target consumers who go online to research financial decisions and to shop.

Search online for answers to credit questions, and you are likely to be inundated with ads for payday loans, some with messages like this: “Cash loans can help when bills come out of nowhere.” Scroll down a bit, and you see that such “help” comes at a hefty cost: the annualized percentage rate is 573.05%.

Despite high costs, more and more borrowers are falling for that lure of easy money – filling out online loan applications and sending private financial information to far-away strangers.

Those strangers on the other end of the transaction often are elusive even in the physical places where they are located. Some establish bases in one state or country but lend money to residents elsewhere, a practice that helps them escape local laws.

The strategy apparently works for those companies. Online lenders have increased their sales considerably over the past six years, according to industry analysts.

In 2006, before the start of the financial downturn, the national volume of Internet short-term loans was $5.7 billion, according to a report issued last November by Mercator Advisory Group, an industry research firm. By 2011, the report shows, that number had grown by more than 120 percent to $13 billion.

Just as online payday lending is growing, so is concern among analysts over the risk of fraud. Online anonymity has provided shelter for identity thieves and other scammers, the report said.

Of the 12 million Americans who took out payday loans in 2010, almost one fourth borrowed from online lenders, according to a 2012 study by Pew Charitable Trusts.

What’s true nationwide also is true proportionally in Minnesota, where demand for quick loans skyrocketed during the Great Recession. (For more detail, see the first installment of this series.)  State regulators can’t say for sure how much borrowing grew during that period in the illicit online industry, but they do know that residents seeking to plug financial holes have fallen victim to massive fees, privacy breaches and harassment.

In December, for example, she settled with an unlicensed payday lender charging state residents interest rates reaching 1,564 percent. The company, Sure Advance, LLC, was forced to pay $760,000 in restitution, and it was restricted from doing business in Minnesota unless it obtained the proper registration and complied with state lending regulations. 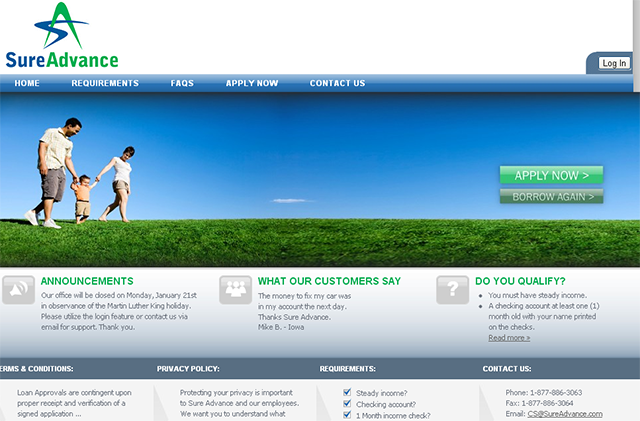 The Delaware-based company had granted more than 1,200 loans to Minnesota residents, before the attorney general filed suit in September 2011, alleging Sure Advance had violated state payday lending laws. The Consent Decree and Order entered in Hennepin County District Court says that the company agreed to its terms “without admitting liability.”

Prior to settling that case, Swanson’s office had sued eight other unlicensed Internet lenders, including three in 2010, for similar practices.

Sucked into the debt spiral

Most online lenders secure the borrowers’ future paychecks to repay the loans, operating under the expectation that funds will be available in a given bank account come payday. After the customer enters personal information, including  Social Security number, the loan usually is deposited into his or her account within hours. Then the lender withdraws the loan repayment and interest from the borrower’s bank account on the agreed-upon date.

But the typical transaction doesn’t end that neatly. The lenders’ business model works most profitably when borrowers can’t catch up on payday and end up seeking repeated extensions on the loans. Indeed, borrowers face a constant drumbeat from lenders to refinance existing loans, causing the initial sum borrowed to balloon into a far larger debt.

The Minnesota attorney general has sued several companies in recent years for demanding high-interest payments that were illegally extended across multiple paychecks. And it has received a rash of complaints about phony debt-collection calls from international criminal fraud rings. After consumers enter private data into the website of an online lender, so-called phantom debt collectors falsely tell the consumers that they owe money on a loan and will be arrested or jailed if they don’t immediately pay it back.

Another type of fraud, advance-fee Internet loans, has also been on the rise, regulators say. Some payday scam websites ask the borrowers to pay upfront fees before money will be advanced. They collect the fees and then disappear without the borrower ever seeing any loan money.

The tactics have prompted Minnesota consumers to file official complaints about high fees and shady dealings associated with online loans,

During 2010 and 2011, Minnesotans filed 58 complaints against payday lenders, many of them Internet based, according to the Minnesota Department of Commerce. MinnPost, through the Minnesota Data Practices Act, obtained copies of some of those complaints on which names and other personal information had been concealed.

A Maple Grove resident complained in February 2012 about being charged $105 in fees for a $350 loan from Utah-based Omega Investments, Ltd., LLC. Another customer in Mora, Minn., allegedly received a $400 loan from Oklahoma-based AmeriLoan and was assessed $120 in fees.

Some saw unexpected fees tacked on to loan payments and withdrawals.

One lender, Loan Shop Online, allegedly charged fees each time a payment wasn’t cleared, overdrawing one customer’s Bank of America account by $1,200. Most of the debt was from a string of $35 fees for insufficient funds. The borrower said in the complaint that Loan Shop was “continually making daily and weekly unauthorized” withdrawals from the account “in order for them to get their money.” 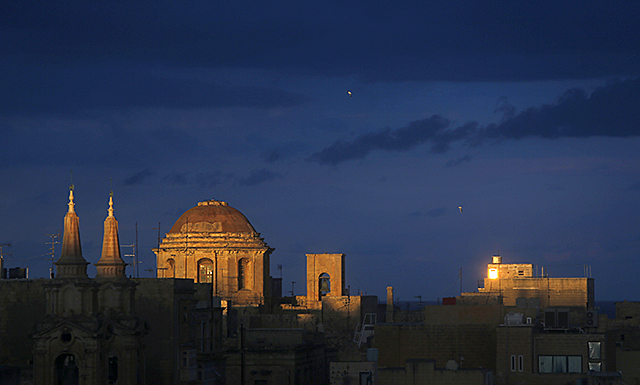 REUTERS/Darrin Zammit LuMinnesota authorities have launched a crackdown against predatory lenders who operate from Malta and other far-away places.

Many of the borrowers did not discover that the online lenders were violating Minnesota law until after they had taken the loans.

“I borrowed money from this company, not knowing about their business. I found out MN law only allows $350 loans online and a limited interest,” said a complaint against Loan Shop Online filed by an Arden Hills resident.

“I realize I should have done more research about them before transacting any business,” said a 2010 complaint filed against Northway Credit Corporation based in Malta.

Even companies that were licensed to operate in Minnesota generated complaints about heavy-handed collection tactics.

A 2011 complaint filed against Cash Central, a Utah-based company licensed to operate as a Minnesota payday lender, prompted a response from Swanson’s office: “[The resident] was making regular payments on this loan, but he is now in a financial hardship and unable to continue making payments. [The resident] is now receiving collection calls, and he wants these calls to cease immediately.”

While online lenders have claimed exemption from various state regulations, a Minnesota law requires Internet payday loan companies to register with the state and comply with its rules regardless of where they are based.

State law also caps the fees that can be charged on payday loans. Lenders are not supposed to charge more than 33 percent annual interest and a $25 fee on loans between $350 and $1,000. For loans under $350, the state has set a sliding scale of the interest and fees allowed; it is far lower than most online lenders were charging.

The online loan industry itself also has sought to battle rampant fraud in its ranks. In 2005, the Online Lenders Alliance was formed to standardize practices among Internet lenders and combat deceptive companies that have tarnished the industry’s reputation.

Meanwhile, Congress has proposed legislation to force some reform in the online payday loan industry.

The Stopping Abuse and Fraud in Electronic Lending Act, or simply the SAFE Lending Act, was introduced in Congress late last year. The legislation aimed to close loopholes used by some online payday lenders. Similar to Minnesota's law, the federal statute would require lenders based offshore or in other states to abide by local lending laws where the borrower resides. Rep. Keith Ellison (D-Minn.) is a co-sponsor of the House version, which has not yet come up for a vote.

Back in Minnesota, the Commerce Department has joined the effort to crack down on unlicensed payday lenders. Four companies based in Utah, Delaware, Oklahoma and Nevada were caught in the department’s net for allegedly operating without proper licenses, yet lending to Minnesota borrowers online anyway.

A few Internet lenders are licensed to do business in Minnesota. They include CashCentral.com and CheckCity.com based in Utah and CashNetUSA.com out of Chicago. You can check the Commerce Department's website to find out whether any lender is licensed with the state. Or you can call the agency at 651-296-4026.

Jeff Hargarten is an intern at MinnPost and a journalism student at the University of Minnesota.