This article was  produced in partnership with students at the University of Minnesota School of Journalism and Mass Communication and is one in a series of occasional articles funded by a grant from the Northwest Area Foundation.

Rose McGee’s first encounter with the issue called “dual-tracking” came on June 4, 2012, when she called CitiMortgage Inc. to inquire about her bid for a modification of her mortgage.

She was shocked by the answer: Her Golden Valley home of nearly 20 years had been sold in a sheriff’s sale on May 18 that year.

“Is this a joke?” McGee recalls asking.

It was no joke. Even while the bank agreed to consider modifying McGee’s mortgage and worked her through the necessary paperwork, it had been moving to foreclose on her home. And now CitiMortgage and Federal National Mortgage Association (Fannie Mae) have gone to court to evict her.

Like McGee, many other homeowners in Minnesota and across the nation have trusted in the lifeline offered by mortgage modification only to learn that lenders were nonetheless positioning themselves to take the property.

Now, in response to protests over cases like McGee’s, the state and federal governments are considering bans on dual-tracking. Bills before the Minnesota Legislature would outlaw the practice in the state. California already has banned it. And federal mortgage servicing rules scheduled to take effect in January 2014 would restrict it.

Meanwhile, a National Mortgage Settlement between the nation’s five largest mortgage servicers, 49 state attorneys general and the federal government was supposed to end dual-track foreclosures for many loans. The case initially was prompted by blatant robo-signing of foreclosure documents without checking their accuracy. Citi was one of the lenders in the settlement announced in February, 2012, along with Ally/GMAC, Bank of America, JPMorgan Chase and Wells Fargo.

The momentum to curb dual-tracking should not be taken to signal a consensus against it.

Arguments aplenty surfaced during a hearing of the proposed Minnesota ban at a Feb. 27 meeting of the House Committee on Civil Law. The bill being debated would go beyond the dual-tracking ban to also require mandatory mediation before a foreclosure and more notification during foreclosure proceedings.

The net effect would be to make lending more risky and expensive in Minnesota  —  and, ultimately, the added burden would fall on prospective borrowers, Tess Rice, General Counsel for the Minnesota Bankers Association testified.

“I do think that lending will be reduced everywhere . . . if it is more difficult to foreclose,” she said.

Minnesota borrowers still would get loans, Rice testified, but “the standards will be higher and it will cost more.”

If that were true, Californians should be having trouble getting mortgages right now because their ban took effect Jan. 1, said the Minnesota bill’s chief House author, Rep. Mike Freiberg, DFL-Golden Valley.

But the mortgage market remains robust in California, he said, and Minnesota’s proposed legislation is fashioned after California’s law.

“The mortgage market in California is doing just fine,” Freiberg said in an interview.

California passed its dual-tracking ban last summer as part of its Homeowner Bill of Rights. Some have credited it with significantly reducing California’s foreclosure rate.

For the first time since 2007, California was not the state with the most foreclosure filings per property in January, according to foreclosure listing firm RealtyTrac’s January report. Foreclosure starts in California in January had dropped 62 percent from December.

Critics of the Minnesota legislation also have argued that dual-tracking is increasingly rare.

But Michael Wang, a Minneapolis attorney representing McGee and other homeowners battling foreclosure, said he has multiple clients that are “great examples” of the problem.

“The financial institutions are trying to claim that dual-tracking doesn’t occur, but I get phone calls about it every week,” he said.

They started with the death of her husband when he was just 47 years old. William McGee had been the first African-American to be appointed Chief Public Defender in Minnesota, according to a tribute posted on a website of the University of Minnesota Law School.

After he died in 2000, Rose McGee planned to sell their home overlooking a pond in a leafy suburban neighborhood. But in the economic slump that followed the Sept. 11, 2001, terrorist attacks, homes in her neighborhood weren’t selling. So she stayed.

But keeping up with the mortgage payments was a struggle. A break came when the Obama administration created the Home Affordable Modification Program in 2009. Under that program, McGee’s interest rate was reduced and, as a result, her payments dropped too.

“Finally, I had an affordable mortgage,” she said. 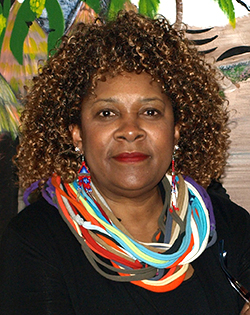 Not for long, though. In 2011, she lost her job. At age 60, she was hunting for work in the toughest job market Minnesota had seen in decades.

Expecting to miss payments, McGee said, she contacted CitiMortgage to explain the situation and discuss her options. Nothing could be done until she was truly behind on payments for a few months, she learned.

In January 2012, Citi moved to foreclose and scheduled a sheriff’s sale of the house. By that time, McGee had a lead on a promising new job, so she contacted the bank again and asked whether mortgage modification was possible. Citi agreed to consider her request, and she got busy lining up the required paperwork. She was told, she said, not to worry about foreclosure-related notifications that would come routinely.

McGee said she called Citi on May 24 and was told that her modification had been denied. Then, when she called again on June 4 to ask about other options, she learned that the home already had been sold. CitiMortgage had bought it in the May 18 sheriff’s sale and, in turn, sold its interests to Fannie Mae.

“It was strictly business, and I understand that, but it is painful nonetheless,” McGee said. “The government was taking care of the banks, and yet here we are  —  people like me.”

Some people might have given up at that point. Not McGee. She had longstanding connections in the Twin Cities. Beyond her work for community organizations, she was well-known as a professional storyteller, writer, actor and prolific baker of sweet-potato pies.

After two eviction hearings, McGee still is in her house but living in a state of limbo. She is suing in Hennepin County District Court to invalidate the foreclosure sale. Meanwhile, her attorney, Wang, has asked the Housing Court to put her eviction on hold.

CitiMortgage did not respond to MinnPost’s request for comment on her case and on the broader issue of dual-tracking.

Restricting or banning dual-tracking would not necessarily stop foreclosure for McGee and others who fail to make their scheduled mortgage payments. Indeed, foreclosure may be the fairest all-around option in many cases.

The point is to make sure that meaningful alternatives to foreclosure truly are considered, given the chaos that has characterized the mortgage marketplace in recent years. As millions of borrowers fell behind on their loans, the companies that service those loans were swamped with delinquencies. And some took shortcuts that riled regulators and lawmakers.

“People did not get the help or support they needed, such as timely and accurate information about their options for saving their homes,” Richard Cordray, director of the U.S. Consumer Financial Protection Bureau, said in January in remarks prepared for a mortgage servicing field hearing.

“Servicers failed to answer phone calls, routinely lost paperwork and mishandled accounts,” Cordray said. “Communication and coordination were poor, leading many to think they were on their way to a solution, only to find that their homes had been foreclosed on and sold. At times, people arrived home to find they had been unexpectedly locked out.”

In McGee’s case, attorneys for CitiMortgage notified her more than two months after her home had been sold that she had been given the wrong phone number to call for help with mitigating her loss. Minnesota law requires the foreclosing company to provide a document called “Help for Homeowners in Foreclosure” at least four weeks before the sheriff’s sale. The form sent to McGee listed the number of a facsimile machine “answered by high-pitched tones and beats,” according to a complaint filed in her case.

If the new rules issued by the U.S. Consumer Financial Protection Bureau take effect next January, mortgage servicers will not be allowed to issue the first foreclosure notice until an account is more than 120 days delinquent, giving borrowers reasonable time to seek modification. Further, servicers will not be allowed to start a foreclosure proceeding if a modification application is pending.

The foreclosure process would start only after a borrower rejected a mitigation offer, failed to comply with the terms of such an offer or received notice that he/she is not eligible for any alternative options. And foreclosure would have to wait until any appeal had been settled.

What about a case like McGee’s, where the foreclosure process already had started before her modification application? If she completed her application 37 days before the scheduled foreclosure sale, the new rules still would apply. In other words, Citi could not have proceeded with the sale of her home until she was notified that her request for modification was denied and she had exhausted her options to appeal that decision. 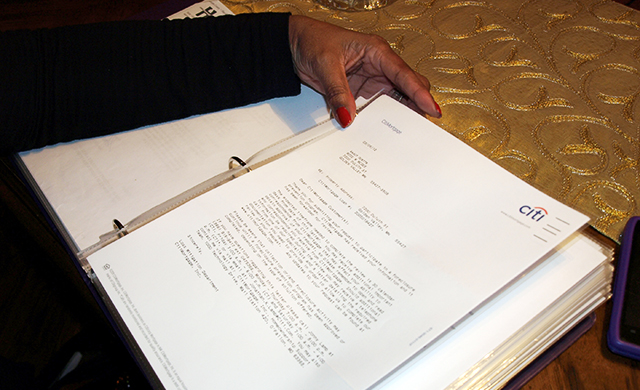 MinnPost photo by Sharon SchmickleAttorneys for CitiMortgage notified McGee more than two months after her home had been sold that she had been given the wrong phone number to call for help with mitigating her loss.

At a hearing of Minnesota’s proposed ban, David Skilbred, vice president of the Independent Community Bankers of Minnesota, testified that the new federal restrictions have resolved any dual-tracking concerns. If Minnesota were to pass a different law, he said, “that would cause a problem…especially with the small banks.”

Rice, of the Minnesota Bankers Association, said: “Small lenders are already planning their exit from the mortgage market due to the complexity of the federal rules. …. We believe adding a second layer of state regulation will only exacerbate the situation.”

The Consumer Bureau has said that small mortgage servers who handle 5,000 mortgages or less would be exempt from some of the rules.

Freiberg, author of the Minnesota bill, cited several reasons the state should proceed with its own ban. One is that state law could take effect many months before the federal government implements its rules.

Another reason is that the U.S. Consumer Financial Protection Bureau is operating under a legal cloud. After Republicans in Congress blocked President Obama’s choice for its director, Obama appointed Cordray while Congress was in recess. Recently, a federal appeals court ruled that another one of Obama’s so-called recess appointments was unconstitutional. Meanwhile, congressional Republicans have insisted that Cordray must be replaced by a bipartisan oversight commission, and they have threatened to pull funding from the agency.

Yet another reason, Freiberg said, is that the state bill offers more effective enforcement mechanisms than the federal rules.

‘Wears terribly on you’

Meanwhile, McGee has posted a sign on her front lawn saying “Stand Together Stop Foreclosures.”

Her fate rests on the outcome of her two court cases, she said, not on the bills before the Minnesota Legislature. Still, she has been a prominent advocate for the bills, testifying at hearings and appearing at press conferences staged by the DFL authors.

She hopes to spare others from dual-tracking.

“It’s frustrating,” McGee said. “It wears terribly on you.”

Sarah Rose Miller is an intern at MinnPost.