A group of Republican lawmakers on Wednesday outlined a civil-union alternative to the controversial gay-marriage legislation cooking at the Capitol this session, but it’s unclear whether the compromise measure has enough support to get very far.

Republicans who back the civil-union plan – four lawmakers outlined the proposal in front of reporters on Wednesday – said they would vote against gay-marriage legislation pushed by Democrats in control of the Legislature. They said the union measure would end Minnesota’s divisive marriage debate and refocus lawmakers on tackling important economic issues.

“This puts the social issues to bed,” GOP Rep. Denny McNamara said. “Let’s get back on the budget. … Let’s move on.”

“We are here to offer a way to unite Minnesota and to bring forth a bill that will take the divisive social issues away from the political arena and give everyone the individual rights that they deserve,” the Republican from Red Wing said, outlining the legislation.

Kelly’s language toward some sort of same-sex marriage compromise reflects a small, but growing, trend among Republicans who say that government should stay out of personal issues like marriage. GOP Sen. Branden Petersen and former State Auditor Pat Anderson have come out in favor of gay marriage using similar arguments.

But it’s unclear if this civil-union proposal has the support to move forward in the House. Kelly said a Senate counterpart is coming, but didn’t say who would sponsor the bill there.

The group, one of the main organizers for the marriage amendment, is reserving judgment on the measure until after members have had a chance to examine the bill. Leva said Minnesota for Marriage is concerned conscientious objectors’ civil liberties could be infringed if lawmakers pass a civil-union bill.

“Minnesota for Marriage as an institution is committed to protecting the definition of marriage,” she said. “If this law as it’s interpreted would in any way undermine our state’s marriage law, we’d absolutely be opposed.”

Minnesotans United for All Families, the amendment campaign-turned-lobbying effort, condemned the proposal shortly after it was released. They remain squarely behind the gay-marriage legislation that has so far moved through the Legislature.

The same-sex marriage legislation passed through a committee in both the House and Senate and now waits in limbo for legislative leaders to bring it up for a floor vote.

DFL leaders say they’re waiting to move on social issues until significant progress on the state’s budget has been made, which could mean the measures sit untouched until late April.

Certain legislative deadlines have passed, which means that Kelly and other civil-union supporters would have to get special permission for their bill to get a hearing in the House.

Kelly said he would request a hearing from Rep. John Lesch, who chairs the House Civil Law Committee. That committee passed the gay-marriage bill along party lines last month.

Lesch called the civil-union legislation a “cheap copy” of the existing same-sex marriage bill. He said he hasn’t decided if he will give Kelly’s measure a hearing.

It’s likely that civil union supporters will attempt to attach Kelly’s measure to the existing same-sex marriage bill on the House floor. 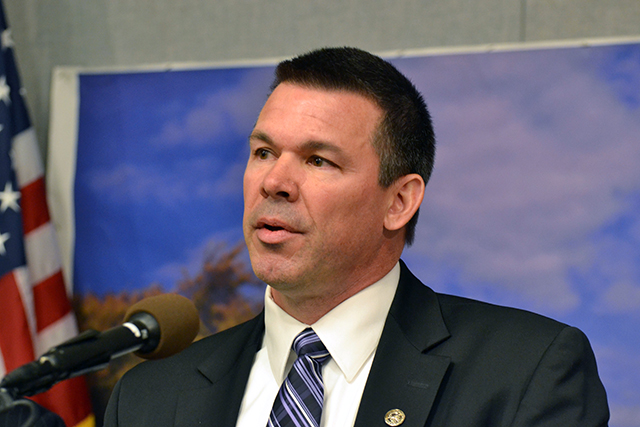 MinnPost photo by James NordRep. Tim Kelly: “We are here to offer a way to unite Minnesota and to bring forth a bill that will take the divisive social issues away from the political arena and give everyone the individual rights that they deserve.”

“Civil unions at this point are a day late and a dollar short,” Lesch told MinnPost. “The movement of the people of Minnesota is definitely toward marriage equality, and we didn’t start this. [Republicans] did. So it’s inevitable that because they opened the door to this, they’re going to have to deal with full equality being the question on the table.”

“The bill announced today is an idea whose time has passed and would simply create a new separate and unequal category for same-sex couples in our state,” Thissen said in the statement.

“That is not acceptable to those — like me — who support full marriage equality for all Minnesotans, and it will not have broad support in the Minnesota House of Representatives.”

Civil unions: It looks like an uphill fight for compromise idea