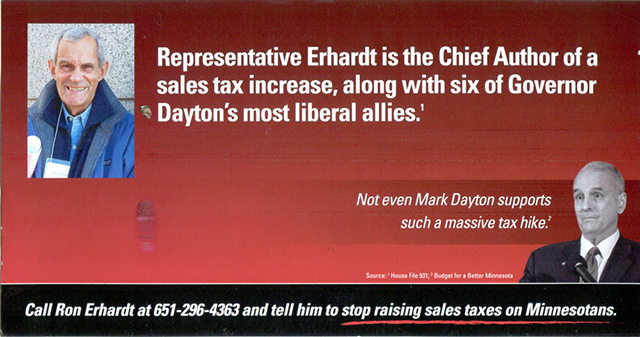 Residents in Edina received 11-by-6 inch glossy mailers claimimh their legislator wants to raise taxes “even more than Mark Dayton.”

A new round of political mailers is arriving in selected mailboxes around the state.

Americans for Prosperity Minnesota, the conservative political advocacy group affiliated with the Koch brothers, has targeted legislators who have proposed tax increases that the group claims exceed the tax hikes proposed by Gov. Mark Dayton.

“We are trying to educate citizens and urging them to contact legislators,” said John Cooney, APM’s state director.

The mailers are vague about which taxes the legislators are proposing to increase, but a visit to the APM website provides details. It says Rosenthal is proposing an increase in the metro-area transit tax, Erhardt a gas-tax increase and Nelson an increase in the cigarette tax. The website also lists more than three dozen other tax bills and authors.

Nelson is livid about the mailer. “It’s blatantly false, it’s just wrong,” she said. “The cigarette tax is revenue neutral because all of the increased revenue is used to buy down the business property tax.”

Her justification doesn’t impress Cooney. “Her tax on cigarettes exceeds by 40 percent the governor’s proposal,” he said.

Cooney said that three more legislative districts will receive similar mailers by the end of the week. Furthermore, he said, APM will push out email alerts to its members about tax and regulatory issues that are the group’s core concerns.

To aid in this effort, Cooney said, APM gathers activists every Tuesday at the Kelly Inn in St. Paul, just across from the Capitol complex. They discuss and flag legislation that they consider exceeds Dayton’s tax increases.

While APM defends this approach, Nelson finds it absurd. “This is a case where they either didn’t read the bill or just saw the three-letter word ‘tax,’” she said.  “My proposal is tax reform.” And, she adds, given her conservative credentials, “my district isn’t buying”  the attack in the mailer.

Rosenthal also contends that APM doesn’t understand the legislation for which he’s criticized.  Rosenthal has authored legislation to provide bonding money for a southwest light-rail line and said he co-authored a bill to raise the sales for transit as a back-up. “This is just another way of going about to fund projects if the bonding is not approved,” he said.

Rosenthal chuckled when told that both Republicans and DFLers are targets of the APM mailers. “Well, good for them on that,” he said.

Political affiliation and reputation don’t figure into an APM decision to go after a piece of legislation and its author, according to Cooney. “We don’t engage in personalities; we are not trying to prop them up or defeat them in an election,” he said.  “We want to educate citizens on how they voted.”

Cooney promised that the mail would keep coming. “I’m sure we will be active well beyond the next election,” he said. “We are not going to give up.”