Gov. Mark Dayton’s recent “Meet with Mark” sessions around the state have drawn a wide mix of public reactions, but none like Monday night’s gathering.

The animated session turned out to be a lot like a Tea Party gathering.

So hostile were some in the Shakopee crowd of about 200 that Dayton, who usually is pretty good at controlling his emotions, got testy when people interrupted his answers.

“I’ve been all over the state,” he said at one point during the meeting at the Shakopee High School auditorium — his first metro-area meeting. “Never seen a group this rude.”

Dayton knew that he was not stepping into friendly territory. Scott County is not exactly DFL country. And it should be noted that not all in the crowd were unfriendly to the governor.

But the recurring theme was taxes: Minnesota taxes driving businesses out of the state; DFLers who just know how to tax, tax, tax; DFLers merely trying to redistribute the wealth.

After the governor was introduced — in glowing terms by Shakopee Mayor Brad Tabke, who praised the governor and state agencies for their work in helping to spur economic development in Shakopee — things turned grim.

A woman from Prior Lake asked the governor: “How much of my dollar will I be allowed to keep? What’s my fair share?”

“The system is not fair now,” the governor said, explaining that the wealthiest pay at a lower percentage than the middle class.

“You’re not answering my question,” she said, angrily. “How much of my dollar do I get to keep.”

The governor tried again. He said tax incidence studies show that Minnesotans pay about 12.8 percent in state and local taxes.

On and on it went. Many of the bitter complaints about taxes and government spending started with such phrases as “I’ve heard” and “I’ve been told.”

For example, there was George McGuire of Shakopee.

“That’s wildly inaccurate,” Dayton said, explaining that the biggest education cost is for teachers, and in his mind, that means money for the classrooms.

Dayton said that he’s been hearing that Minnesota’s tax climate will chase businesses away since 1977, when he was commissioner of the Department of Economic Development.

In reality, he said, the state ranks 11th in per capita income and 12th in job growth, while the states that are allegedly taking all of Minnesota’s business, rank near the bottom in those categories.

But most didn’t seem to hear the governor. 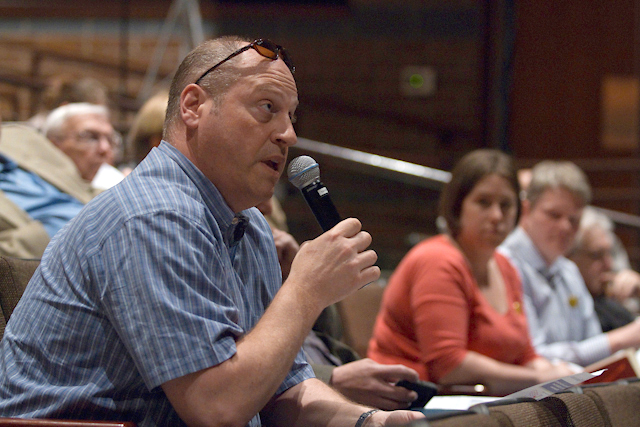 After hearing for about the sixth time that Minnesota would be better off simply cutting state spending to balance the budget, Dayton said, “Elections have consequences.”

That statement sounded like fightin’ words to one man, who tried to come off as a man of reason.

“When you say, ‘Elections have consequences,’ it’s almost a slap in the face,” the man said. “It’s like you’re saying, ‘Shove it.’ It just doesn’t allow input from others. Let’s be reasonable. Let’s take a different approach. We want businesses to locate here. We’re losing companies. The taxes are way too high. We want every business to re-locate here.”

Dayton tried to explain that he wasn’t looking for a fight with his comment.

The approach he ran on

He was only trying to point out, he said, that he had run against a cuts-only opponent in the governor’s race, and he had won. Dayton said his approach to balancing the budget is with a combination of cuts and tax increases.

At times, Dayton did get some subtle forms of assistance. In a couple of cases, it was pointed out that government really isn’t like a business — that government has responsibilities beyond profits.

Lee Larson, director of St. Gertrude’s Health and Rehabilitation Center in Shakopee, spoke of how his 320 employees have had to bite the economic bullet for too long because of the tight state budget. He said that 48 percent of the reimbursement for patients at the center comes from the state, with 50 percent from the feds and just 2 percent from private insurers.

Because there have been no increases in state funding for four years, “the impact on our employees is incredible.”

There was applause for Larson when he asked the governor to support a plan that would mean 5 percent pay increases for the employees in each of the next two years. (The Dayton administration supports a plan that allows for 2 percent increases.)

A form of support also came from a surprising source, Rep. Michael Beard, a Shakopee Republican.

After a farmer talked of the dangerous conditions of many of Minnesota’s rural roads – dangers created by narrow shoulders and steep-angle ditches – Beard, a conservative, spoke of the high costs of safety.

Beard spoke, in praise, of the emphasis Minnesota is putting on creating safer roads. He spoke of how highway deaths in the last two decades have fallen from 650 to 350 because of “better design.” But better design has raised the cost of construction from $100,000 a mile 20 years ago to $1 million a mile now.

Over the course of the night, a few others spoke words of appreciation for the governor.

But most complained, sometimes bitterly.

There was Melissa from Prior Lake.

“I’m concerned,” she said. “We’re facing the largest tax increase in our history! I hear about ‘fair share.’ We have a slogan in our house, ‘The fair is in August.’ ”

For the most part, Dayton tried to calmly answer the questions of people who seemed not to believe a word he said.

And, at the end of 90 minutes, he tried to send people home with a smile. It’s OK to disagree, he said.

“I don’t agree with myself all of the time.”