The line of cars with orange parking tickets tucked under their windshields ran for blocks along South Fourth Avenue in downtown Minneapolis Sept. 23, a placid Sunday morning. If one of those cars was yours, you quickly and rudely discovered the end to one of downtown Minneapolis’ little gems — free street parking for Minnesota Vikings games, if you arrived early enough and knew where to look.

Before Minneapolis began replacing its old parking meters with numbered posts and pay stations in November 2010, Fourth and Fifth avenues, plus certain cross streets between them, were well-known havens for the thrifty parkers.

Meters on those streets need not be fed on weekends, so smart drivers bypassed parking ramps and pay lots and searched for street parking first. Before Target Field opened in 2010, savvy Twins fans attending weeknight games at the Metrodome trolled those same streets where spaces were free after 6 p.m.

Now those blocks are part of a large Metrodome Event Rate parking district that, thanks to the city’s new solar-powered technology, generates more revenue and eliminates Sunday freebies when the Vikes play.

And that’s not all. Another Event Rate district exists around Target Field, though it is not as well marked and not as expensive. A much smaller district surrounds the Minneapolis Convention Center, and another lies near TCF Bank Stadium at the University of Minnesota. 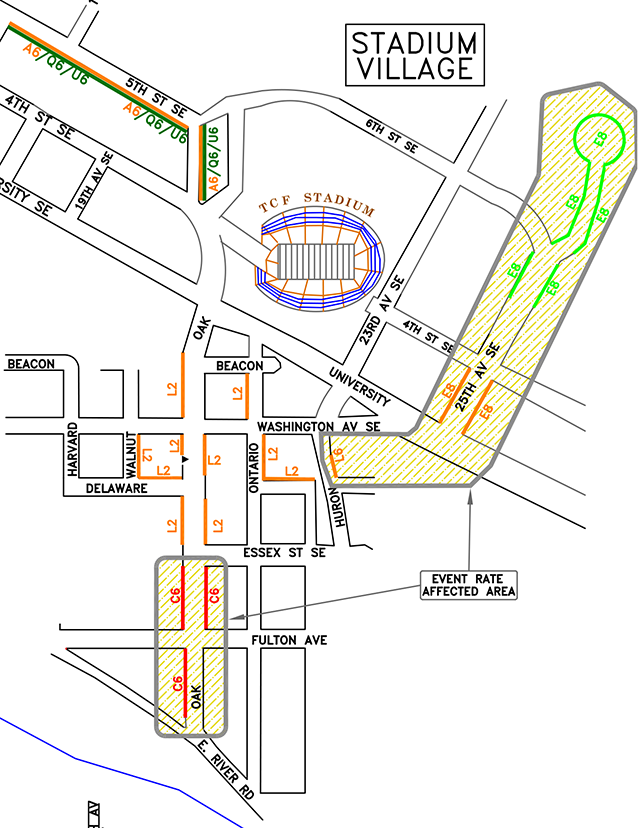 If all that is news to you, welcome to the club.

Beyond posting maps and information on its website, the city did a poor job getting the word out about these districts. Searching the Star Tribune website turned up nothing about them.  Although Minneapolis parking engineer Tim Drew remembers doing television interviews, he said, “People just don’t watch the news, or don’t pay that kind of attention to it.”

A Minneapolis spokesman said the city’s parking ticket database can’t distinguish between event rate violations and simple expired meters, making it difficult to tell how many drivers were snagged by the changes.

It’s easier to distinguish along Fourth Avenue, since meters are only in effect when the Vikings play. There, on four Vikings playing dates, traffic officers wrote 74 tickets according to city records — 33 on Sept. 23, nine on Oct. 7, 25 on Oct. 21 and seven on Dec. 30. Each citation carries a $42 fine, of which $24 goes to the city (that’s a patriotic $1,776 into city coffers) and the rest split between Hennepin County and the state.

The city did not release information on the four other playing dates, three Sunday afternoons and one Thursday night.

The Metrodome district runs roughly north to Marquette Avenue, east to Washington Avenue, south to 13th Avenue and west to Grant and 11th streets. It also encompasses a couple of blocks east of Washington (see map). A Metrodome logo identifies posts in the district, and the pay stations indicate when the event rate is in effect. 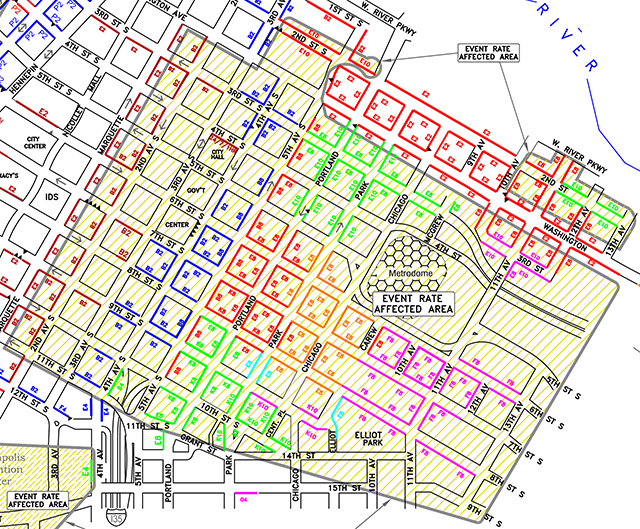 For Vikings games, the city originally charged $3 an hour, Drew said, before switching to a flat rate of $15 that will be in effect again this season.

That’s right. Fifteen bucks to park your car on the street.

“It gets you all the way until the next morning,” Drew said. “We got a lot of feedback from fans who wanted to do something after the game, or were worried they might get stuck if the game ran late.” Drew estimated the city earned an additional $10,000 in parking revenue for each Vikings game than on non-game Sundays.

Drew said the rates rise only for Vikings games. All other Dome events, such as the Prep Bowl, monster truck rallies and college baseball games, are exempt.

“That’s subject to change,” he said, “but I don’t see it happening in the near future.”

No flat rate exists around Target Field for Twins games, Drew said. Instead, fees jump to $1.50 or $2.50 an hour, depending on proximity to the park. That Event District (see map) stops just short of Washington Avenue North, where most parking is 75 cents an hour until 10 p.m., protecting patrons of North Loop restaurants and shops. 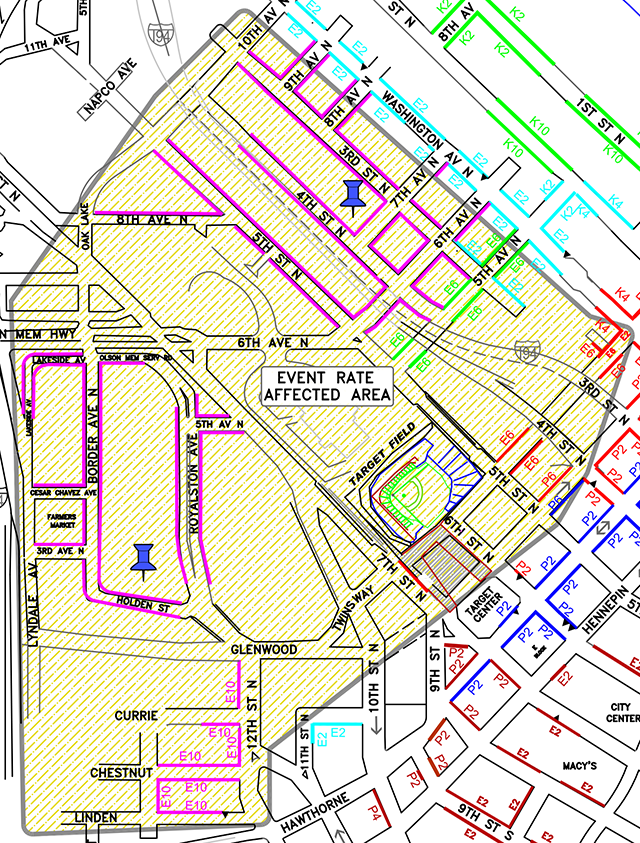 But not every post in the district is properly marked. I found quite a few along Fifth Avenue North and nearby streets lacking a “Check Pay Stations Daily for Events” notice. Again, the pay stations indicate when the event rate is in effect, so it’s best to check. Drew said the event rates will be charged for Twins games and the Kenny Chesney concert on July 12.

Curiously, there is no city parking command center, no big room with a lighted map along one wall. The city contracted with a company in Tampa, Fla., then known as CALE Parking Systems USA, to install and manage the parking system. The five-year, $7.5 million agreement runs through July 31, 2015. To re-set rates on certain dates, Drew simply sends an email to CALE.

That CALE won the contract at all takes some explaining. A division of Swedish-based CALE Access, CALE Parking’s reputation took a hit when its pay boxes repeatedly malfunctioned in Chicago in 2009. About 250 machines failed to issue receipts for several hours in late May. Complaints about accurate timing followed in September. And that December, dozens of boxes froze up on a cold day.

Drew said Minneapolis officials were aware of the problems. In a seven-month test of equipment among four bidding companies in Minneapolis, Drew said CALE nevertheless rated the best. So far, there has been one major glitch, in February, when about 140 of the city’s approximately 600 stations failed for a day and had to be rebooted.

Less than a year after the city signed the agreement, CALE turned up in a federal investigation over the awarding of parking contracts in Portland, Ore. Portland parking manager Ellis K. McCoy pled guilty last year to taking bribes and filing false tax returns. According to reports in the Portland Oregonian newspaper, although court records did not identify the two parking meter company executives who allegedly bribed McCoy, the FBI and IRS raided CALE’s offices the same day as McCoy’s office and home. CALE Access purchased the company’s assets in December 2011 and changed the name to CALE America.

Oklahoma City and Portland, Maine, delayed its CALE contracts until the federal investigation concluded. Drew said CALE informed the city of the investigation. Even if the city wanted to suspend the contract, Drew said, it couldn’t because the work had begun.

When I asked Drew what the Minneapolis City Council thought of CALE’s legal troubles, he paused.

“I’m not sure if we brought it up to the City Council,” Drew said, “but they probably learned about it through different channels.”

It’s interesting that St. Paul, which also contracted with CALE for pay stations, continued its longstanding policy of free street parking at night. It extended pay parking an additional 30 minutes, from 4:30 p.m. to 5 p.m., but that’s all. With all the sports events and concerts at Xcel Energy Center, plus the Ordway Center for the Performing Arts, that’s a lot of revenue to turn down.

“The mayor [Chris Coleman] and the City Council discussed this, and I guess they wanted to take it one step at a time,” St. Martin said. “I can see that coming up for further discussion with the business community and the residential community.”