While the 2013 Minnesota Legislature still has unfinished work, it appears that both DFLers and Republicans will go home happy.

DFLers – in full control of state government for the first time since 1990 – will be able to boast of a long list of accomplishments that should satisfy their liberal base and perhaps appeal to folks in the political center.

Republicans will see some of these same accomplishments as potent political issues that they can use in next year’s gubernatorial and Minnesota House races, particularly in swing districts in suburban and ex-urban areas.

As usual, the final weekend of the session was long and often unruly, as the two houses struggled to complete their work, including final passage of the nine spending and tax bills that will constitute the state’s budget for the next two years. They must complete that work by midnight Monday.

Curiously, the House DFL leadership spent many hours over the weekend working on a bill that would enable two politically powerful unions to conduct organizing votes among child-care workers and personal-care attendants. The controversial bill diverted attention from higher-priority budget measures that benefited many more Minnesotans. The Senate-passed bill still awaits a final House vote.

Nonetheless, House Majority Leader Erin Murphy, DFL-St. Paul, said Sunday that political gridlock is over and the 2013 session is shaping up as the most productive one she has participated in.

“We are completing work on the first structurally balanced budget since before the Great Recession,” Murphy said. “We are making historic investments in education, including full funding for all-day kindergarten and a tuition freeze that will help our debt-ridden college students. And we are providing meaningful property tax relief to middle class Minnesotans who have seen their property taxes skyrocket. “

The DFL’s list of major accomplishments this session include:

For several DFL constituencies, there were obvious disappointments. Gun safety advocates were angry that the two houses shied away from any legislation – including bans on military-style assault weapons, limits on high-capacity magazines or expanded background checks – intended to stem gun violence.

Transportation advocates failed to secure increases in the metro sales tax for transit and the gasoline tax for highways. This failure likely will delay the development of the proposed Southwest Corridor light-rail transit (LRT) project and other plans to expand the regional transit system. 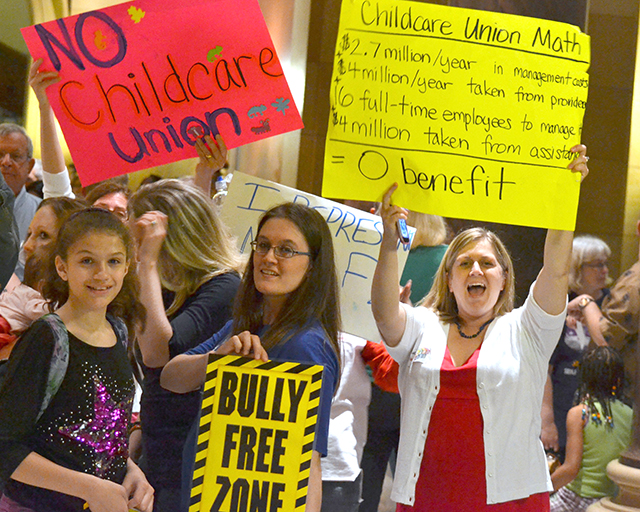 MinnPost photo by James NordThe unionization forces, both for and against, never left the Capitol the entire weekend.

Members of the Republican minority also will emerge with issues they can talk about in next year’s political campaign. They likely will assail DFLers for:

While Republicans were closed out of the tax and budget negotiations, they flexed their limited political muscles in the House to block an $800 million capital investment bill. House members voted 76-56 in favor of the measure, but that was five votes short of the three-fifths majority needed to pass a bonding bill. All but three Republicans voted against it.

Early Monday, the Senate approved a scaled-back $132 million bonding measure that includes money to repair the deteriorating Capitol building. Some version of that bill still could be passed before the two houses adjourn.