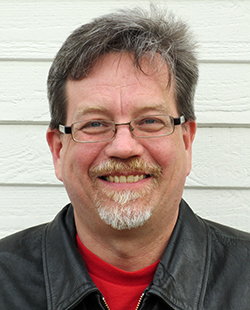 Brett Stevens, a paralegal with a Twin Cities law firm and a columnist for Lavender magazine, has riled supporters of gay marriage.

Stevens is gay, and he and his partner celebrated the 15th anniversary of their relationship this year. In his columns and in testimony at legislative committee hearings on a bill to legalize same-sex marriage in Minnesota, Stevens has urged lawmakers to consider civil unions as an alternative.

In an interview with MinnPost, Stevens argues that despite the defeat of the proposed marriage amendment last fall, same-sex marriage is a step too far for too many legislators. He fears that without an effort to push for civil unions, gay couples will still find themselves unprotected by state law when this legislative session is over.

MinnPost: Do you in principle support marriage for same-sex couples?

Brett Stevens: Absolutely.  I have been advocating for it for a long, long time. If same sex marriage happens, I‘ll be very, very happy.  I’m just afraid it simply will not.

MP: What makes you believe the current bill to legalize same-sex marriage will fail?

I looked at polls and I saw that civil unions are overwhelmingly popular. So what I have been doing is, I have been trying to open up the conversation so if same sex-marriage doesn’t pass, that there’s something else that would recognize my relationship.

MP: Why should gay couples accept the lesser status of a civil union?

Stevens: This is a serious issue that matters to people right now. Here’s one example of why we need something done now. I did an interview with an attorney and he said there were people going off and getting married in Canada or in Iowa. They’re coming back and living in Minnesota and then they realize that getting married was probably not a good idea. Well they can’t get a divorce in Minnesota because the courts don’t recognize it. And to get a divorce in Canada or in Iowa, there’s a residency requirement. So there are people actually right now living in a precarious situation that cannot find relief in the courts.

MP: What is your opinion of the civil union legislation offered by Republican Rep. Tim Kelly?

Stevens: I think it’s a good first step. The bill repeals the state DOMA [Defense of Marriage Act] law. It would allow the courts to recognize and deal with LGBT couple issues.

MP: With so much movement in the U.S. and around the world toward acceptance of gay marriage, why do you think progressive Minnesota would be opposed?

MP: In your columns, you’ve suggested the DFL isn’t addressing gay concerns strongly enough, that they take the gay community for granted. Why?

Stevens: They don’t just take us for granted, they use the gay community. We are a huge supplier of volunteers. We’re a huge supplier of money. They just consider us to be an incredibly reliable source of help in getting them elected. And then they turn around and after the election, and say we’re not going to use our political capital on that.

MP: But the DFL has put forward the gay-marriage legislation, over the objections of some of their leaders.

Stevens: I interviewed John Marty in early December, and he said he was going to introduce the bill the first day of session. Well it didn’t get introduced until February 28, and it’s the exact same bill that Marty had proposed before. It went to two committees and it passed through these two committees that didn’t have any rural DFL people on it. They were loaded committees and everyone knew they were going to pass.

There’s no discussion going on about this issue, and that’s not the way to persuade people to change their minds.

MP: What have you heard from gay marriage supporters on the position you’ve taken?

Stevens: What I’ve heard from many gay people and many gay allies is that something should happen. We need something to happen. In fact, the reason I didn’t chicken out and I did go and testify before the House and the Senate committee hearings and said we need to introduce a compromise so we get something if same-sex marriage doesn’t pass – the reason I did was because I had people who told me that they want their relationships recognized. And I feel like no one is speaking for them.