Democrats walked out of the 2013 legislative session with a handful of key victories — and some disappointments.

The successes included passage of $2 billion in new taxes to solve a projected budget deficit and fund program investments, as well as historic legislation that makes Minnesota the 12th state to approve same-sex marriage. The lawmakers also passed measures that give unions the opportunity to organize a new sector of workers and add sweeping new programs across the state budget.

The DFL legislative majorities, however, were unable to deliver on bills dealing with major gun-control efforts, an increase in the minimum wage or a stronger anti-bullying bill.

Their first session in complete control of state government in 20 years went to the very last minute Monday evening as DFLers in the House and Senate finished up work just moments before midnight, the constitutional adjournment deadline.

House Speaker Paul Thissen rushed through his words, making them almost unintelligible, as he went through the last order of business — a technical corrections bill fixing minor errors in other pieces of legislation.

“We listened to Minnesotans all last summer and fall, and they were clear about what they hoped for. They were hoping for effective government, they were hoping for an honestly balanced budget and one that focused on the priorities that they talked about, and we delivered on that,” House Majority Leader Erin Murphy said shortly after the House adjourned until Feb. 24.

“It feels really good to be able to stand up here at the end of session and say, ‘We listened to what you had to say, and those are the things we focused on.’ ”

The last piece of major action in the Senate was the $2 billion in tax hikes, which Democrats will use to pay for their investments in schools, property tax relief and economic development initiatives.

That measure includes a $1.1 billion fourth-tier income tax hike on the wealthiest 2 percent of Minnesotans, plus new revenue from a $1.60-a-pack increase in cigarette taxes and a broadening of business services covered by the sales tax. It also means some tax cuts for local governments and businesses, as well as $400 million in property tax relief.

The Senate acted on the tax bill with about five minutes to spare. Gov. Mark Dayton is expected to sign all of the budget bills without issue.

Perhaps the biggest headache for Democrats was a House vote on a bill that allows unions to try to organize child-care providers and personal care attendants. That debate stretched on for nearly 12 hours. 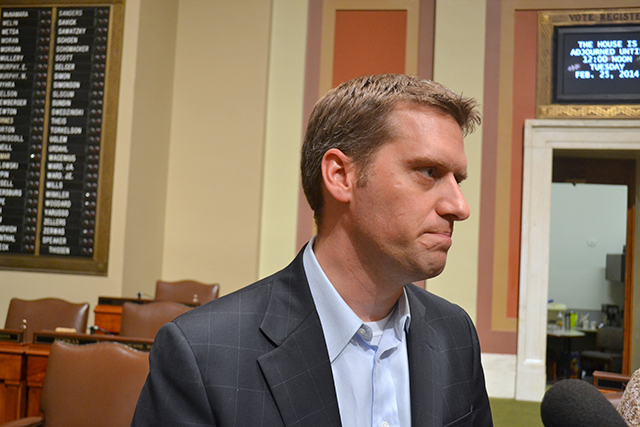 It eventually scraped by 68 to 66 Monday afternoon after vocal objections from Republicans. The GOP pushed back hard against the tax increases and many of the programs included in the Democrats’ budget bills until the very end.

“We had an opportunity, and we came to a fork in the road where we could grow Minnesota’s economy without raising taxes and make Minnesota more competitive, and the Democrats took the wrong fork and moved toward tax increases and increased regulations that ultimately are going to hurt Minnesota’s economy,” he said.

Daudt and Senate Minority Leader David Hann are taking their message throughout the state in a fly-around on Tuesday while Democrats celebrate the session with Dayton.

DFLers attempted to bill the 2013 session as the “education session” and put nearly $500 million toward early childhood and K-12 education, plus even more money toward higher education. Some of those investments include scholarships for early learning and voluntary all-day kindergarten.

They also tackled issues as varied as election law changes gun control, as well as passing sweeping state-based health reform and gaining historic approval of  gay marriage. (You can check out the results at MinnPost’s Legislative Bill Tracker.)

But DFLers walked away with disappointing outcomes on two key issues that should have come through for them, namely a minimum-wage hike and anti-bullying legislation, both of which tanked at the last minute.

However, they were able to rescue a $156 million bonding bill that will fund continuing renovation work on the crumbling state Capitol.

After Democrats failed to pass an $800 million version, a series of private negotiations led to the smaller bill, which also includes a number of other projects.

“I wasn’t going home without the Capitol renovations, and the House was having a difficult time figuring out how they were going to accomplish that,” said Senate Majority Leader Tom Bakk, who has been a proponent of the project all session.

“It was a strong priority for me to make sure these renovations of our state Capitol continue, and I think we were at significant risk of that not happening this session,” Bakk said just after session ended.

DFL wraps up session with key victories, some losses — and hectic last day