A steady jog on Friday turned into a full sprint as DFLers ramped up passing their major state budget bills over the weekend in order to get done before the legislative session ends on Monday.

By Saturday afternoon, DFLers had finished up with four omnibus budget bills — including the massive Health and Human Services compromise legislation — that are now on the way to Gov. Mark Dayton’s desk.

The other measures they have wrapped up are funding for jobs and economic development, the judiciary and higher education.

Democrats got into full swing with the budget Friday afternoon after facing criticism from Republicans that they were wasting time with such distractions as a failed effort to pass a bonding bill and action on a proposed constitutional amendment related to legislative pay.

Both the House and Senate are likely to work past midnight on other budget bills as they became available.

Many of the remaining conference committees — including transportation and taxes — are expected to come to an agreement Saturday evening, clearing a path for Democrats to finish their work with little time to spare.

Those two conference committee reports represent key and controversial measures, including roughly $2 billion in tax hikes — the “linchpin” of the Democrats’ budget deal — and a potential gas tax at a time when fuel prices are at a record high in Minnesota.

On Saturday afternoon, the Senate approved the Health and Human Services omnibus bill, the second-largest budget bill lawmakers have to deal with. The measure, which cleared the House Friday evening, covers nearly one-third of Minnesota’s state general fund budget.

Lawmakers in the Senate quickly moved to smaller policy bills while the House debated funding for state pension programs, which the Senate had passed on Friday.

The House and Senate were also working on a number of smaller bills as they waited for conference committee reports to become available.

House Majority Leader Erin Murphy said that lawmakers in her chamber would consider the E-12 education and agriculture and environment bills on Saturday in a push to hear as many budget bills as possible before taking up a controversial unionization measure covering many child-care providers and personal care attendants.

Republicans debated the  unionization measure in the Senate for a record 17 hours, and GOP representatives had filed more than 100 amendments to the bill in the House, which points to an extremely lengthy debate. 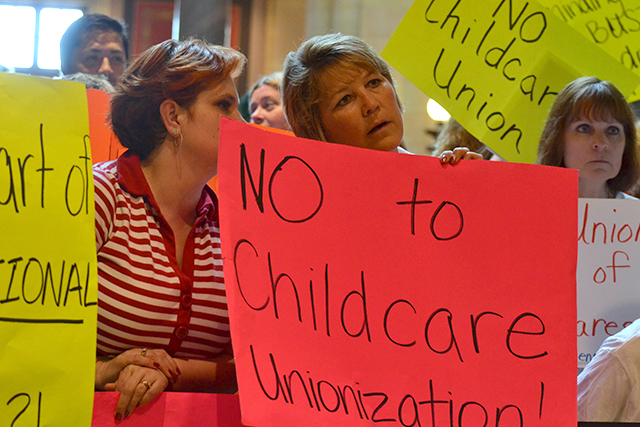 MinnPost photo by James NordPro- and anti-union activists demonstrated outside of the House chamber on Saturday as the body was set to discuss a unionization bill for many child-care workers and personal care attendants.

Demonstrators rallied outside of the House chamber both for and against the unionization measure as lawmakers inside pushed on with their work. The chants and cheering were reminiscent of the gay marriage debate that filled the Capitol over the past week.

There’s also a chance the House could take up bills related to elections and campaign finance, Murphy said, in order to tackle as much as possible before the unionization vote. Once the E-12 education bill passes, the House will have passed the vast majority of the state’s general fund spending.

Speaker Paul Thissen, who took a break from the House floor to pick up a Diet Coke and a couple slices of pizza, said the House would likely go through the night, take a break for lawmakers to attend religious services, and reconvene midday Sunday.

It’s unclear exactly how Democrats will address complications related to the unionization vote if they arise. DFL leaders in the House demurred when asked if they would use their majority status to limit debate if it stretches on into Sunday.

“I hope that we are able to have a debate … in this body that is about the policy and our differences and not use that bill as a tool to try and slow down the work of the Legislature,” Murphy said.

But on Friday, it was the Republicans who were criticizing the Democrats for being too slow. DFLers dealt with two controversial measures that Republicans latched onto: legislative pay and a bonding bill.

Democrats used their majority to pass a bill asking citizens to change the constitution to establish a citizen council to establish legislator pay. 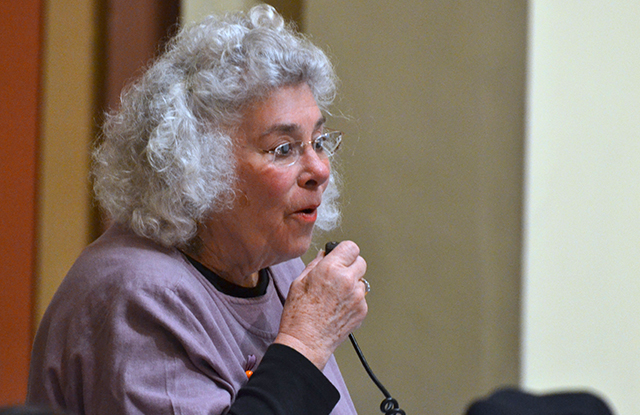 “Can you tell me why this is such a priority right now before we take up budget bills?” House Minority Leader Kurt Daudt asked, expressing similar concerns about the borrowing legislation.

Rep. Alice Hausman, the bonding bill’s chief House sponsor, told her colleagues that the Friday vote was their only chance to pass a bonding bill this session and to keep renovation of the crumbling state Capitol on track.

She told reporters shortly after the measure failed that it was a “tragic” scenario, and it appeared that a full bonding bill would be nearly impossible to resurrect before the Monday adjournment deadline.

But Senate President Sandy Pappas told MinnPost on Saturday afternoon that the Senate was serious about pursuing a pared-down bonding bill that includes the Capitol renovations and a few other projects.

“We’ve got to do the Capitol,” she said, standing outside of the Senate chambers as the floor session busily commenced. “It’s very serious.”

While Hausman had said there was no ‘Plan B’ before Friday’s vote in the House, Pappas said, “I think there was always a backup.”

Senate Majority Leader Tom Bakk has been adamant that the Capitol renovations move forward this session, and he even included the restorations in the Senate’s tax plan to lift the project above the bonding bill’s political fray.

Hausman appeared surprised that a bonding bill, which must originate in the House, might again be on the table. The Democrat from St. Paul said she was unsure if she would be part of the process.

Bonding-oriented Republicans in the House and Senate also appeared skeptical that a borrowing bill would pass before Monday. Rep. Matt Dean, the lead capital investment Republican in the House, wouldn’t clearly address if his caucus would support a smaller, Capitol-focused bill.

“It would depend on communication and negotiation, but our first priority is the budget obviously,” he said.

Thissen said a bonding bill do-over was the subject of some thought but recognized tensions between the House and Senate.

“I think there’s a difference of opinion about it,” he said.