What could have been a tough fight Monday for gay marriage supporters turned into a brief, uncontroversial committee stop to address the small fiscal impact of the bill —paving the way for a likely floor vote on Thursday.

As this year’s legislative session wraps up, the gay marriage vote is expected to be the final divisive issue Democrats tackle alongside the state budget.

DFL lawmakers who support the measure say they have the House votes to pass it, while opponents deny that’s true.

The bill, which already passed through a committee in both legislative chambers, had to be heard in the House Ways and Means Committee after lawmakers received analysis of the bill’s fiscal impact late last week. It passed on a voice vote after fewer than 10 minutes of discussion.

Afterward, Democrats on the committee congratulated Rep. Karen Clark, who is carrying the legislation.

“One more stop,” Rep. Alice Hausman said as she hugged Clark, a DFLer from Minneapolis.

Clark told reporters after the meeting that the uneventful vote and lack of discussion mean smooth sailing for the controversial legislation. She said she’s optimistic people are seeing a change in Minnesota.

“We will pass this bill,” she said on Monday. “Yes we will.”

That’s a completely different message from the one opponents of the measure delivered Monday at a midday press conference.

Minnesota for Marriage, the main group opposing the gay marriage legislation, crowded a group of opponents into a Capitol conference room to highlight the troubles other states have had after legalizing gay marriage.

City clerks from New York, which legalized gay marriage in 2011, discussed how their faith clashed with the requirement to issue marriage licenses.

A husband-and-wife team who run a farm told reporters how they started to receive negative publicity and eventually a human rights complaint after refusing to hold a gay couple’s ceremony there.

Cynthia Gifford, who runs Liberty Ridge Farm in New York, said small-business owners shouldn’t have to choose between “our religious beliefs … and our family income.”

She and other same-sex marriage opponents said lawmakers in New York bought the lie that there would be religious protections included in the gay marriage legislation there.

So far, the Rev. Jason McGuire, executive director of New Yorkers for Constitutional Freedoms, said Minnesotans should be similarly concerned.

“Our Legislature bought the lie, and today we’re living the lie,” he said. 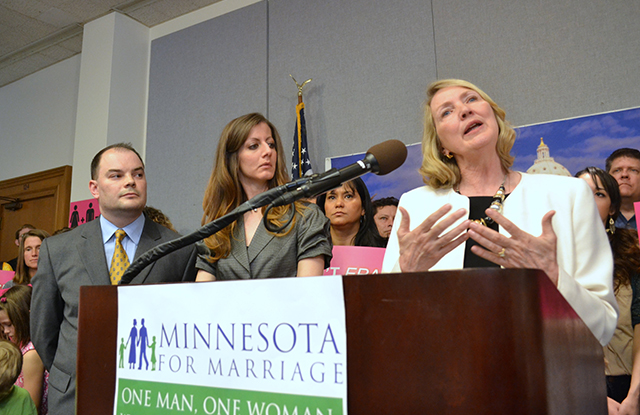 Jason Adkins, vice chairman of Minnesota for Marriage, told reporters that House lawmakers don’t have the votes to pass such legislation. Clark, the sponsor there, said she’s confident that the votes exist.

A series of rural Democrats who were on the fence have voiced their support for the bill in recent weeks. Clark said she’s also had conversations with Republicans but demurred when asked if any would be supporting the bill.

She said it’s likely more votes than supporters need would come spontaneously on the House floor.

The House Rules Committee will take up the legislation today to place it on the Thursday calendar for floor debate. Both sides will be battling behind the scenes to line up last-minute votes until then.

“Just stay tuned,” Clark said after the Monday hearing. “I think it will be a wonderful story to follow in the end. There’ll be lots of good stories.”