Gov. Mark Dayton and the DFL legislative leaders outlined their “linchpin” $2 billion tax deal Thursday evening — it built upon a framework proposal released Sunday — that clears the way for Democrats to finalize the state budget as the session draws to a close.

The House gave up some significant provisions in the deal, including a proposed alcohol tax hike and a surcharge to pay back roughly $800 million owed to the state’s school districts.

DFLers used the deal to push back against Republican criticisms from earlier in the day that they hadn’t finalized the budget early enough.

“This is the linchpin of the session,” Senate Majority Leader Tom Bakk told reporters at a press conference announcing the deal. “Now everything will fall in under the tax bill, so we are well on our way and I would argue ahead of schedule.”

Dayton told reporters at the event that DFLers had kept their promises to Minnesotans from the beginning of session — to raise revenue progressively and to invest in education, property tax relief and economic development initiatives.

“I think we’re on the cusp of an important course correction in our state’s history, and I think this budget that we’re talking about today, that we’re going to be able to pass in the next several days is a clear indication that that is the case,” House Speaker Paul Thissen said. “This tax bill allows us to reverse that course and really set the stage for a prosperous Minnesota and a growing middle class.”

The plan would impose a fourth-tier income tax rate of 9.85 percent on the top 2 percent of Minnesotans — the governor’s language.

It would also offer roughly $400 million in property tax relief and use additional revenue from the expanded sales tax on business services to exempt local governments from paying sales tax and give businesses an upfront exemption on capital purchases.

Much of the deal — excluding the dropped shift surtax — reflects the framework deal lawmakers outlined on Sunday.

Lawmakers described the updated plan to reporters but didn’t have hard numbers available for analysis. The Taxes conference committee, which traded deals all week, was canceled for late Thursday evening.

The Mayo Destination Medical Center will be part of the tax bill, but top DFLers are still working out the final provisions of the deal.

Thissen defended dropping the surcharge, which would have funded the House’s key priority for this session: paying back the school shift.

“At the end of the day, Minnesotans want us to compromise to figure out a way to put a deal together,” he said, noting that the improving economy could pay back the shift on its own and that lawmakers would use excess revenues at the end of the fiscal year to put toward the shift.

Dayton also said that if more action was needed, lawmakers would revisit the issue. 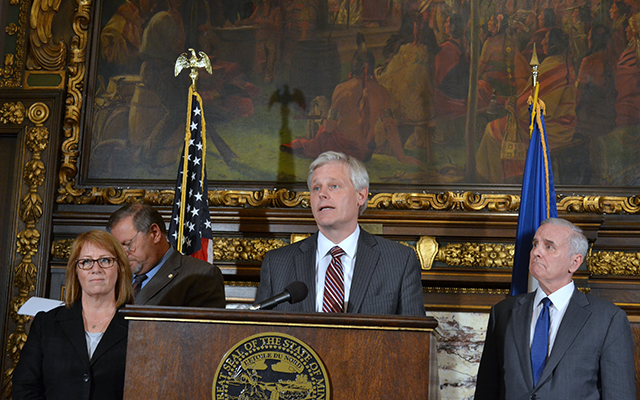 MinnPost photo by James NordHouse Speaker Paul Thissen: “This tax bill allows us to reverse that course and really set the stage for a prosperous Minnesota and a growing middle class.”

Republicans blasted the plan as a do-over of an already horrible tax proposal. House Minority Leader Kurt Daudt also criticized DFLers for abandoning the shift repayment, which he said was a House priority.

The House is set to take up an $800 million bonding bill Friday, but Daudt and Senate Minority Leader David Hann made it clear that they wouldn’t provide the Republican votes to pass the measure. Such borrowing bills require 60 percent majorities to pass.

With the tax deal finalized, DFLers have at least got a pathway to the end of session. Their work will ramp up into the weekend as they pass huge omnibus budget bills to fund state government before their Monday adjournment deadline.