House Democrats passed a series of procedural election changes Wednesday that just might earn the signature of Gov. Mark Dayton, who has called for broad, bipartisan support before he would allow them to become law.

That’s a far cry from the ultra-partisan debates that have surrounded election legislation — particularly so-called “Voter ID” provisions — during the last two sessions when Republicans controlled the state House and Senate.

The change in tone was remarkable. Republicans who helped craft the bill praised Rep. Steve Simon, the measure’s chief author in the House, for including more GOP ideas than provisions backed by Democrats.

Simon has known all session that he has to tread carefully if he wants to get anything substantial done. He has to maneuver between meeting the governor’s mandate for bipartisan support while crafting a package that goes far enough to appeal to DFLers.

The bill that passed Wednesday appears to fulfill both aims, although it doesn’t go as far as its Senate counterpart in establishing DFL-backed policy.

The House measure contains three “highlights,” as Simon puts it:

• New procedures governing how candidates can get off the ballot close to an election.

• And a roughly $60,000 pilot project for electronic poll books, which have resurfaced since last year’s voting amendment debate.

The “no-excuses” absentee voting would change existing state law that lawmakers believe most absentee voters already ignore. It would remove the requirement to have an excuse in order to get an absentee ballot. Advocates say it would give more people access to the ballot box.

“I don’t think we should make lawbreakers out of the many Minnesotans who already vote absentee for reasons of convenience,” Simon said after Wednesday’s successful 74-to-60 vote.

Lawmakers also want to change election law after the state Supreme Court ruled that a lawmaker could get his name removed from the ballot after a scandal. Simon said members from both parties want to ensure that candidates don’t simply drop out of a race because they’re behind in the polls.

“If you’re not really, really sick or you’re dead, you’re not getting off the ballot,” he said of the changes the bill would make.

Simon managed to ease some of the bill’s controversy by removing a provision that would have offered Minnesota’s support for a national popular vote to decide the president. That measure, a separate bill, was eventually sent back to committee. 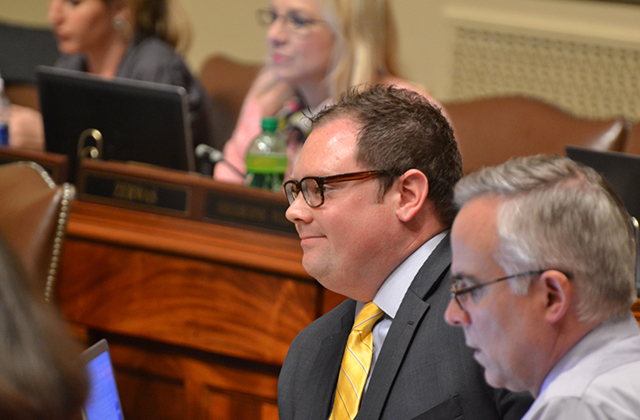 MinnPost photo by James NordRep. Tim Sanders, the lead Republican on the House Elections Committee, was one of the few Republicans to vote for the bill.

But Republicans were still understandably wary of promising their support to an election bill that’s headed to conference committee and could change significantly before returning to the House for a vote.

Assistant Senate Majority Leader Katie Sieben, who heads the elections committee there, has appeared less concerned than Simon with earning bipartisan support for her bill.

Sieben has backed straightforward “early voting” in her omnibus bill, which is moving as a standalone bill in the House. Rep. Tim Sanders, the Republican lead on the House Elections Committee, said such a measure, which GOP lawmakers argue would ruin election integrity, is a “non-starter” for his caucus.

“If early voting comes back, that’s something that blows up the deal, and our caucus just won’t be able to support that,” he said.

But Sanders, who voted for the bill on Wednesday, said if the measure comes back from conference committee as-is, Simon can expect more than just two Republican votes.

“I think if the House positions are the positions that come back, we have a very strong possibility of having a broad bipartisan bill,” he said.

Simon said he understands why only a couple of Republicans supported his bill out of the gate.

He said he doesn’t take it personally.

“I think there are many, many other people who support the bill,” he said. “But, in the spirit of Ronald Reagan, ‘Trust but verify,’ they didn’t want to sort of give away their green votes too early, and they want to make sure that it stays palatable from their standpoint through conference.”