Joyful same-sex marriage supporters who packed into the state Capitol Monday afternoon roared and rallied as the measure all but became legal in Minnesota, following the Legislature’s final approval of the bill.

The party will continue into Tuesday evening, when Gov. Mark Dayton holds a public signing ceremony on the Capitol steps and the city of St. Paul hosts an outdoor musical celebration to commemorate Minnesota becoming the 12th state to permit gay marriage.

The supporters screamed and cheered for their legislative heroes, Sen. Scott Dibble and Rep. Karen Clark, who whipped up the packed Capitol rotunda after the Senate’s historic 37-to-30 vote to approve the measure. It followed the House’s bipartisan vote in support of gay marriage last week.

“I’m going to be a married man in Minnesota!” Dibble told the jubilant crowd of supporters shortly after the vote, referring to his partner, Richard Leyva. “This is what democracy looks like!”

The crowd exploded just before the vote – it often droned over the senators wrapping up their floor speeches – and continued on into Monday evening after the lawmakers had exited the Senate chambers.

The Senate debate over gay marriage was at times as personal as it was divisive.

Dibble and a host of other Democrats supporting the bill pushed for marriage equality, while Republicans – only one voted for the measure – argued against it on grounds of religious liberty.

The Senate adopted the House’s language in order to keep the proceedings to a single vote — and defeated a handful of GOP amendments in the process. One failed amendment from Sen. Paul Gazelka would have provided more protections for people, institutions and businesses that reject same-sex marriage on religious grounds.

Almost every Republican who spoke expressed concerns about religious freedoms that they said could be infringed on by provisions in the bill.

“They’ll call me a bigot, they’ll call me a hater, they’ll spit in my face,” said GOP Sen. Dan Hall, who strongly objected to the measure for religious reasons. He told his colleagues, “There are things in life … that are worth standing up for, even to be persecuted for.”

Lawmakers appeared to be thinking about their place in history as they prepared to cast their votes. A sense of inevitability — a feeling that a few Republican legislators noted — hung over the chamber during the lengthy debate.

Sen. Branden Petersen, the only Republican ultimately to support the measure, said he was extremely unsure of his position in the Senate after publicly backing gay marriage.

“I truly couldn’t come back to this chamber as an honest legislator and cast a no vote on this bill,” he said, and then offered some advice: “In all things related to your faith, to your freedom, to your family, be bold and be courageous and you’ll never regret a day in your life.”

Three DFL senators voted against the bill: Lyle Koenen, Dan Sparks and LeRoy Stumpf. That makes the Senate vote far from the bipartisan display that occurred in the House.

But the crowds and the senators simply seemed overjoyed that they’d managed to pass the legislation just six months after beating back a constitutional amendment that would have enshrined the opposite in the Minnesota Constitution.

“I am proud to be a Minnesotan today,” Dibble said just before the vote. “Today we have the power, the awesome, humbling power to make dreams come true.” 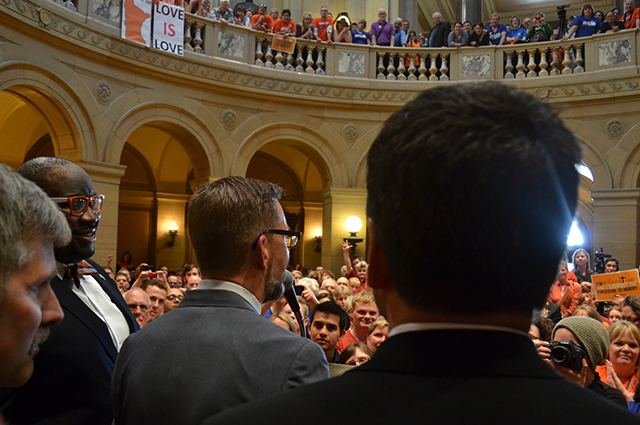