The Southwest Corridor light-rail transit (LRT) project received an unexpected boost in the final transportation finance bill approved by the Minnesota Legislature over the weekend.

The two houses provided $37 million in general fund money toward the state’s 10-percent share of the project’s $1.25 billion estimated cost. Normally, the Legislature provides bonding money for such capital projects, but House Republicans had enough votes to block passage of a proposed $800 million bonding bill that included money for Southwest.

Dayton had proposed increasing the existing quarter-cent regional sales tax for transit by a half-cent, which would have provided increased funding for both transit capital projects and operating costs. But Dayton opposed raising the gasoline tax to provide additional funding for highways, which transportation advocates said was necessary to garner rural votes needed to pass the measure.

Hornstein said failure to approve the sales tax increase for transit this year was “a missed opportunity,” but that the general fund money for Southwest was “kind of a consolation prize for transit.”

An earlier version of the bill left transit $18 million short of what is needed to fund Metro Transit, Metro Mobility for the disabled,  six suburban transit providers and Transit Link dial-a-ride service for areas without regular-route transit.

Susan Haigh, chair of the Metropolitan Council, expressed her appreciation for the measure, saying it “moves transit forward. During the last decade, the state has rarely met its obligation to fund rail operations. This bill fulfills those commitments while also funding our base bus system. Additionally, the $37 million commitment to Southwest light rail will keep our region’s third light-rail line on schedule.”

The 15.8-mile Southwest Corridor line would run between downtown Minneapolis and Eden Prairie. It  would connect with the Central Corridor tracks at Target Field and provide riders from the southwest suburbs with a one-train, one-seat ride all the way to the new Vikings stadium, the University of Minnesota, the State Capitol and downtown St. Paul.

The council began preliminary engineering on the project earlier this year and hopes to apply for federal approval in June 2014 to begin the next phase of design work. The current timeline calls for construction to start in 2015, with passenger service beginning in 2018. 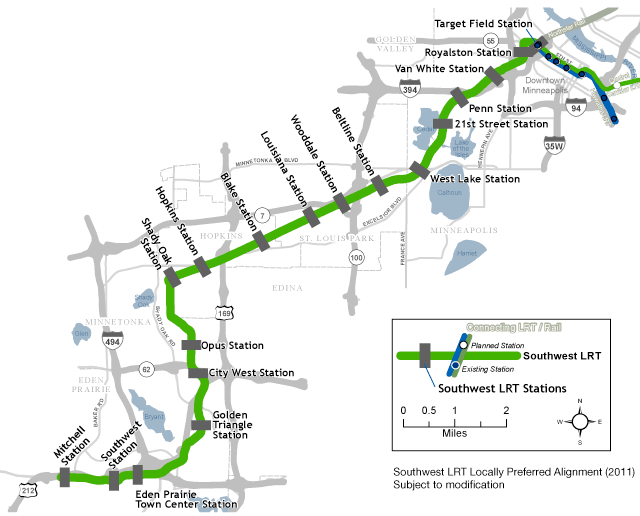 In order to compete for 50-percent federal funding, the council needs funding commitments from state and local sources for the other 50 percent. Under the financing model that has been used in this region, that includes securing $125 million from the state. The $37 million approved by the Legislature last weekend brings the state’s total commitment to $44 million.

“This will tide us over for now,” Hornstein said, “and there will be another opportunity next year to secure the remaining $81 million in state funding.”

Several other transit projects are waiting in the wings, including the proposed 13-mile Bottineau Boulevard LRT line between downtown Minneapolis and Brooklyn Park. Earlier this month, the Met Council approved the proposed line, adding it to the region’s long-range transportation plan.

Hornstein said he still believes the Twin Cities needs an increased regional sales tax to provide “a steady, reliable funding source” for transit and allow this region to compete with Denver, Salt Lake and other cities that are building out their transit systems much more rapidly than the Twin Cities.

That view was echoed Monday by Barb Thoman, executive director of Transit for Livable Communities, a transit advocacy group.

“Minnesota had a chance to make a decisive move on transportation but decided not to take it,” Thoman said. “Instead of moving sensibly to expand our transit system, we’re stalled. No increase in local bus, minimal progress on rail. This is a huge disappointment, especially to all the people who need more affordable options for getting to work and school, and for the health and economic vitality of our region. Minnesota is not a national leader today.”