Forget the usual tales of vote-trading, compromise brokering and backroom arm-twisting. All anybody really seems interested in since Thursday’s House of Representatives’ vote to legalize same-sex marriage is whether there will be one specially selected “first” couple to be wed the moment the proposed law would go into effect Aug. 1.

His House counterpart and fellow Minneapolis DFLer, Karen Clark, has not talked publicly about whether she will marry longtime partner, Jacqueline Zita.

Long-engaged Richard Carlbom, head of the marriage-equality campaign Minnesotans United for All Families, is said to have put a deposit on a wedding venue. The associated chatter does not mention a date.

Long-term though their advocacy has been, there are others who have been pushing the issue since even earlier. Jack Baker and Michael McConnell have been trying to get married since 1967 and are the plaintiffs whose unsuccessful suit, Baker v. Nelson, until this year was the only same-sex marriage case to end up at the U.S. Supreme Court. The two are still together, living quietly in Minneapolis.

Or there’s Richfield resident Michael Ryan and his husband, married in Canada. Minneapolis Mayor R.T. Rybak personally offered to wed them again at City Hall Aug. 1. Indeed, His Honor was so verklempt by the emotional tidal wave at the Capitol he tweeted that he’d marry anyone that day — provided they called their senator.

Social media has been ablaze with individuals offering the services of their mail-order-license ministries, rainbow cupcakes or, in the case of Minneapolis’ Hell’s Kitchen, a free Aug. 1 fete for 100 for one couple. (Yes, Minnesota requires a five-day waiting period between the issuance of a marriage license and solemnization of the marriage, but a judge can waive it.)

Indeed symbolism seems to be about all Minnesota’s elected officials and their constituents have been able to think about since the House of Representatives took up the question Thursday.

Asked what today’s historic vote might look like, for example, a member of the leadership team of Minnesotans United replied that Dibble is expected to be wearing a pin from the late Sen. Allan Spear’s 1974 campaign.

Spear came out that year, making him one of the nation’s first openly gay elected officials. He was instrumental in passage 20 years ago of LGBT civil-rights protections but was skeptical same-sex marriage would ever be legal. He died in 2008; his name has come up repeatedly in recent weeks.

And then there’s the question of who will be asked to symbolically broker peace by introducing the FitzSimmons Amendment — the addition of the word “civil” before “marriage” offered in the House by Albertville Republican David FitzSimmons.

Arguably, the amendment itself is symbolic; the first chapter of Minnesota’s existing marriage statute defines marriage as “a civil contract.” And yet the introduction of the clause into the proposed new law gave several lawmakers — including three of FitzSimmons’ caucus-mates — permission to cast “yes” votes. 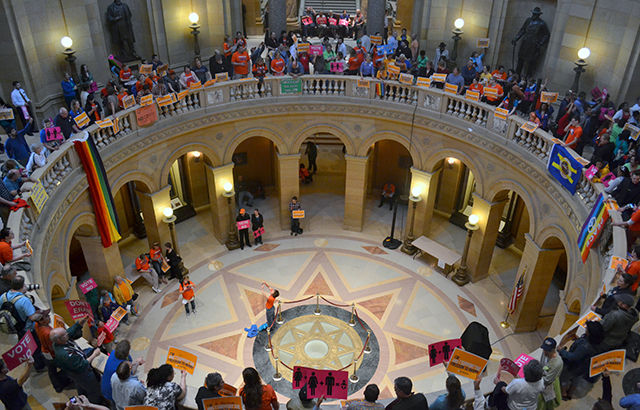 MinnPost photo by James NordRally-goers for and against gay marriage raised their voices in the Capitol Rotunda during last Thursday’s House vote.

Much faster change than expected

And those four GOP votes are symbolic of something else: The number of Americans who approve of same-sex marriage has risen much faster over the last two years than virtually anyone expected. Much as they are changing positions on immigration issues, suburban Republicans in particular are said to be beginning to recognize that the danger of failing to court more diverse voters likely eclipses angering religious conservatives.

Minnesota for Marriage, the group working to defeat same-sex marriage, bused supporters to the Capitol last week and is expected to do so again today. Newspapers have been full of pictures of supporters of both sides — one clad in orange and the other pink — rallying in the same large crowd.

A similar evolutionary calculus appears to have helped DFLers from conservative districts in Greater Minnesota come to the same decision as Rep. Joe Radinovich, the Crosby DFL freshman who had been seen as a bellwether.

Voting with the 61 percent of his district that voted to for a constitutional gay marriage ban last year would have been politically expedient, he told the Brainerd Dispatch, but “Doing the right thing isn’t always popular.”

Similar sentiments have been voiced repeatedly by Andover Republican Sen. Branden Petersen, the first and until Thursday only Minnesota GOP legislator to publicly throw his weight behind the legalization effort. Like Radinovich, he has been influenced by the struggles of gays he’s personally close to yet understands why others oppose gay marriage.

One of the few true unknowns about today’s Senate proceedings is how many GOPers he ultimately brings along. Petersen is said to be working quietly and has been seen in the “war room,” the Capitol meeting room used by Minnesotans United.

While some of the on-the-fence representatives who cast yes votes last week said they made up their minds during the debate while listening to colleagues’ speeches, it’s also likely that a deliberate strategy by gay-marriage advocates of keeping the pressure off until the last minute gave lawmakers precious time.

Republicans were lobbied with information about the rapid shifts of public opinion while DFLers had an opportunity to make sure constituents felt heard. Lawmakers from both parties were contacted by people they knew well who chose this as the time to come out to them.

If the law is enacted, many of the 515 Minnesota laws said to discriminate against gays and lesbians will automatically become egalitarian. Nor would Minnesota have to grapple with many issues still playing out in states where same-sex marriage is legal.

The Supreme Court of Iowa, for instance, two weeks ago ruled that birth certificates no longer call for a mother and a father. Minnesota’s already are gender-neutral.

Finally, it is symbolic, too — although in a very different sense — that the Safe and Supportive Schools Act has had a much tougher legislative trajectory. The Minnesota Catholic Conference and other groups that last year supported the proposed constitutional amendment banning gay marriage worked to defeat the anti-bullying legislation.

Calling it an outgrowth of the push for same-sex marriage, the groups insisted that the school climate law would discriminate against religious students and should not apply to private schools. They succeeded in securing a controversial exemption before the measure passed out of the House last week.

In contrast to the relatively short floor sessions the marriage law is expected to have had in both the House and Senate — long enough for lawmakers to have their up-or-down say about history, but not long enough for more debate — in the House the anti-bullying debate was long and not so civil.

And of course, while some are likely to spend the summer contemplating their vows, a number of elected officials are going to be spending the weeks after the session back home, finding out whether their seats are in fact secure.