The Obama administration’s decision to release more than 2,000 detained undocumented immigrants in anticipation of sequester-related budget cuts has worried some Minnesota counties who rely on revenue brought in by housing those detainees.

Five Minnesota counties, including Carver, Nobles and Freeborn, have agreements with U.S. Immigration and Customs Enforcement (ICE) to board detainees. Ramsey and Sherburne counties, which once took in more than 100 detainees a day, for a fee of at least $80 a head, have gained the most from this arrangement.

But in February ICE, citing $300 million that the impending sequester would strip from its agency budget, released thousands of undocumented immigrants from detention centers, including those in Minnesota.

It’s all a part of the strange economics of U.S. immigration enforcement, where a federal agency racing to meet congressionally mandated detention quotas has helped keep local governments in the black.

Local detention of undocumented immigrants is a relatively new development, resulting from the federal government’s increasingly aggressive enforcement of immigration law over the past decade. ICE detained fewer than 200,000 immigrants in 2005. By 2010 that number had doubled.

According to a January report from the Migration Policy Institute, the Obama administration spent $18 billion on immigration enforcement in 2012. To put that in perspective, the Justice Department’s law enforcement agencies — the F.B.I., the Drug Enforcement Administration and the Bureau of Alcohol, Tobacco, Firearms and Explosives — received a total of $14 billion combined.

Congress handed off $5.5 billion to ICE in 2012 and required the agency to fill 34,000 detention beds at all times. To fulfill that mandate, ICE earmarked more than $2 billion for custody costs. It supplements space in its own detention facilities with rented beds in private prisons and in local detention centers.

Because each “Intergovernmental Service Agreement” or IGSA is negotiated separately between ICE and the individual county, the amount of money ICE pays per detainee per day — the cost per “man-day,” to use the prison-industry term — varies by facility to the next.

ICE says it paid $112.83 per man-day in 2011; immigration watchdog groups estimate that cost in the neighborhood of $160. According to Randy Gustafson, the public information officer at the Ramsey County sheriff’s office, ICE pays $80 per man-day.

Within a few years, Ramsey was doing steady business with ICE, averaging more than 60 boarders daily.

Source: Ramsey County sheriff’s officeNote: “Average Inmates” is the average daily count of ICE detainees at the detention center for the year. “Days” is the total number of inmate days (person x length of stay). “Revenue” is the amount of money received in payment to reimburse the cost of boarding ICE detainees

Minnesota’s other leading ICE client, Sherburne County, was averaging more than 100 detainee releases a month around that time, according to records from the Transaction Records Access Clearinghouse (TRAC), a Syracuse-based project that gathers information on immigration enforcement based on Freedom of Information Act data.

In 2008, Ramsey County could bring in more than $8,000 on a good day and received $1,858,320 overall from ICE. ICE rentals had become such a significant revenue stream that the Ramsey County sheriff’s office began incorporating the numbers into its budget.

As Gustafson explains it, the county doesn’t profit directly from the detainees. The ICE outlay simply covers boarding costs. But since a typical inmate is a strictly an expense, these new revenue-neutral occupants were a boon, allowing the counties to defray staff salaries and other costs of running a prison.

But ICE offers no guarantees in its IGSAs. “There’s no agreement that we’ll board a certain number of detainees at any given time,” Gustfson says. “We never know from day to day how many ICE boarders we’ll have.”

And by 2012 Ramsey County was seeing far fewer detainees, renting an average of 38 beds a day. Revenue dropped by $750,000. For the first quarter of 2013, the average is down to 28 per day, and if those numbers don’t increase, the county is looking at less than $1 million in detainee revenue for the first time in years.

That decline in ICE detainees had contributed to a $1.1 million budget shortfall that the sheriff’s office and the county manager are still working to address. 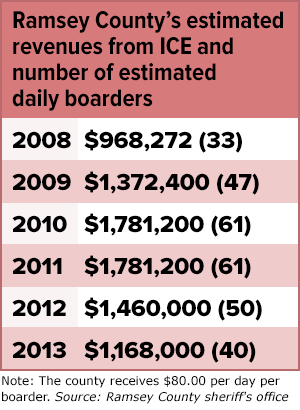 Not everyone is sorry to see those numbers decline. Advocates for undocumented immigrants have consistently claimed that detention is not only expensive but unnecessary when dealing with immigrants who are non-violent or, in many cases, have no criminal record.

The amount of money that ICE has to throw around skews our discussion of immigration enforcement, according to Michele Garnett McKenzie, the director of advocacy at The Advocates for Human Rights. “We have a discussion about revenue, not about philosophy,” she says.

The Obama administration has already explored existing alternatives to detention for non-criminal detainees. They can be monitored via electronic ankle-bracelet, telephone or simply required to check in periodically with an ICE officer. Each method is far cheaper than detention.

With “enforcement of existing laws” a mantra that every immigration reform proposal must intone to be taken seriously, ICE is unlikely to see significant budget cuts. In fact, Congress restored ICE’s full budget shortly after the sequester took effect. The February detainee releases may have been a gambit on the agency’s part to prove its financial need.

Still, a makeshift solution to budgetary issues has turned out to be an unreliable revenue source.

“You wonder whether it’s even worth continuing to anticipate that revenue,” Ramsey County’s Gustafson says.

Keith Harris is a Minneapolis writer and immigration attorney.