Tom Stinson, a fiscal guru who has served as state economist for five governors over nearly 30 years, announced his retirement Monday morning.

Stinson said he would step down to focus on his teaching work at the University of Minnesota, where he is a professor in the Department of Applied Economics.

Laura Kalambokidis, also a U of M economics professor, will replace Stinson as state economist.

“I’m proud of almost all of the stuff we’ve done,” Stinson said at a Monday morning press conference. “We’ve made good calls. We’ve made so many good calls.”

Stinson’s position has been that of a stable economic adviser in tumultuous economic and political times. He has advised governors and Legislatures of both parties through fiscal highs and economic lows, and Minnesota’s economy has outperformed expectations through all of it.

The past decade of his tenure has been rife with chronic deficits and budget gimmicks and one-time Band-Aids used by lawmakers to patch holes in the state’s finances.

While sidestepping partisan politics, Stinson has been an advocate for sustainable and permanent fixes to the state budgeting system.

“Dr. Stinson has been an invaluable source of economic wisdom, sound judgment, and common sense for five administrations,” Gov. Mark Dayton said in a statement. “He represents the very best in excellent, dedicated public service.”

The state economist’s main task is supervising the twice-yearly state budget forecasts, which serve as the main roadmap for lawmakers working to craft a two-year state budget.

Stinson, 70, said he’s surprised at how accurate the forecasts have been overall during his 26-year tenure. He has served as state economist for most of the time that the position has existed.

“I can’t believe how close we were on that, given how little we knew,” he told the group of gathered reporters.

He also marveled at how technology has affected the work his office has been able to complete.

In 1987, when his office was dealing with income tax projections, the mainframe computer staff members were using could complete maybe two or three tasks a day. Now, similar computations take 10 or 15 seconds. 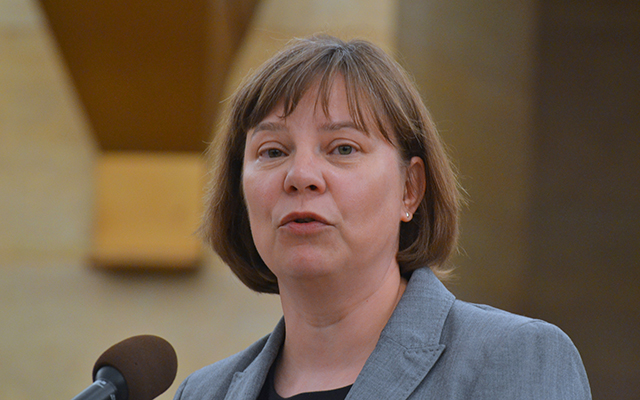 MinnPost photo by James NordDr. Laura Kalambokidis, also a U of M economics professor, will replace Stinson as state economist.

But Stinson also took a moment to look forward.

Changing demographics and workforce development will be two huge factors that will determine whether Minnesota can continue as the economic engine that it’s been, Stinson said.

If high-school graduation rates continue to fall, especially among minority students, he said, the state is in for trouble. He called it the “big challenge” Minnesota has to face.

“It’s the quality of the workforce, and that’s what’s at risk if we don’t do our job expanding educational opportunity,” he said.

Those sorts of predictions will now fall on Kalambokidis, who has worked with Stinson for the last 13 years. She will split her time between the U of M as a teacher, researcher and extension appointee, like Stinson did.

Before coming to the university, Kalambokidis worked for the U.S. Treasury Department and earned her doctorate in economics from the University of Michigan.

Kalambokidis will formally take over as state economist in July. But she has already observed the past two state budget forecasts, “which is why I know how challenging and intricate the process is.”