In May, in the heady moments after the Minnesota Senate voted to recognize LGBT marriage rights, Andy Holmaas watched, agog, as his boss, Minneapolis Mayor and euphoria junkie R.T. Rybak, announced — shouted, really — that he’d marry anyone who showed up at City Hall on Aug. 1, the second it was possible.

For a split second, Holmaas, who is Rybak’s director of community outreach, thought the boss had lost his mind.

“My first thought was, are people really gonna want that?” he said. “And I looked at R.T. and thought, yes, they are. And they are gonna want it as soon as possible.”

Holmaas’ second thought: “How quickly can I tell [Chief of Staff] Jenn O’Rourke and [Communications Director] John Stiles that R.T. just yelled this?”

The mayor, meanwhile, was repeating his offer on Twitter.

“It’s gonna be an interesting summer,” Holmaas thought, not yet suspecting the scope of Rybak’s vision — or that he was about to be anointed reluctant wedding planner.

Amazed, but in his element

Holmaas is 26. He lives in Uptown and pours his excess energy into the local music scene. He’d be happy to just date, thank you very much. His friends are in stitches, but Holmaas — to his own amazement — is in his element.

“We’re opening our doors to anyone,” he said during a recent walk-through of the evening’s choreography. “That’s so reflective of Minneapolis.”

By sunrise Thursday, at least 124 newlyweds will have left City Hall. There will be photos and rings and cake, but there will also be a great deal of attention paid to both the city’s heritage and the moment’s importance in history.

Soon after Dayton signed the new marriage law, Holmaas, Stiles and the rest of the mayor’s staff — party planners none of them — sat down to figure out how to throw a celebration that would have meaning for the entire community.

City Hall, as it happens, is the site of frequent weddings. So many in fact that it has tables, chairs, tablecloths, a list of approved caterers and an event facilitator. Rental fees — expect to pay upwards of $2,000 on a weekend evening — are used for its upkeep.

A giant statue, Father of Waters, carved from a huge piece of marble taken from the same Italian quarry that supplied stone for Leonardo da Vinci, occupies its rotunda. Most visitors hurry past on their way to a tangle of tunnels that lead to two courthouses, new and old county jails and other facilities.

If you stop to look up, however, there’s a six-story atrium lined with marble in four colors, three dozen stained glass windows glowing a soft green and broad marble steps sweeping down both sides.

It is Holmaas’ second-favorite building in Minneapolis. His first? First Avenue — which will become relevant in a moment.

Both city and county agencies there

Listed on the National Register of Historic Places, the building houses agencies from both the city and Hennepin County. Its ownership is a complicated proposition, with its care and preservation entrusted to a joint powers entity called the Metropolitan Building Commission.

The wedding planners’ first stop was the commission, which had to sign off on the event and had to vote to donate a portion of its usual fee. (Each of the couples has been asked to make a $25 contribution.)

The space legally secured, the crew turned their attention to creating a Minneapolis-themed event. Holmaas recalled seeing a tweet the day of the Senate vote from one of his idols, indie musician Jeremy Messersmith: “So, any Minnesotans need marriage music?”

Holmaas messaged him back: “Are you serious?” Messersmith not only was, but volunteered to produce some eight hours of music by a variety of acts ranging from the Twin Cities Gay Men’s Chorus, whose 110 members will sing from the marble stairs from approximately 11:20-11:40, to Semisonic’s John Munson and his Twilight Hours bandmate Matt Wilson.

After welcoming remarks from Gov. Mark Dayton and Rybak, the Copper Street Brass Band will fill the rotunda with a fanfare kicking off the first wedding, which is scheduled to begin at 11:45 July 31.

The second wedding will begin at 12:10, followed by half an hour of music. At 1:00, 40 quicker ceremonies will begin with a goal of 10 an hour and a few breaks. A few yards away in the City Council chambers, seven Hennepin County judges have volunteered to hold some 20 more ceremonies.

Each couple has been encouraged to write their own brief vows. After each is pronounced married, their photos will be taken in the building vestibule, which has a nave-shaped stone wall, and they and their guests will be offered slices of a life-sized cake donated by General Mills’ Betty Crocker division.

Coordination of the donations has been one of Holmaas’ biggest challenges. Gifts to the city must be approved by a vote of the council. Before they can go on the agenda, however, they must be given a commercial value.

What is the value of a life-sized cake, baked by Betty Crocker’s apparently storied “event cake builder,” who has created cakes for New York City’s Pride festivities, among other giant events?

Holmaas doesn’t know yet. He has figured out the cost of the ingredients but is waiting on word from General Mills how much the labor to transport and assemble the cake will be.

Messersmith and police easier to value

And, be-still his hipster heart, he can put a ballpark value on a Messersmith appearance at First Avenue and the other musical acts. Also easier to pin down was the Minneapolis Police Department’s donation of security and the services of photographers who will capture each ceremony and create a group portrait for each couple.

Rybak himself reached out to acclaimed florist Roger Beck, who was immediately captivated by the idea and the venue. 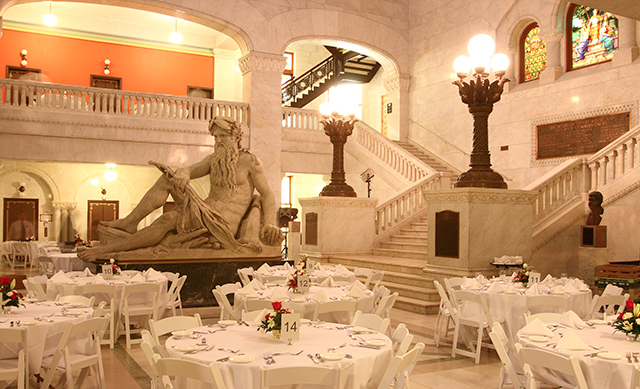 Municipal Building CommissionThe Father of Waters, carved from a huge piece of marble taken from the same Italian quarry that supplied stone for Leonardo da Vinci, attends all of the weddings at City Hall.

The logistics have been equally challenging. Mayor Over-the-Top was persuaded to give up on a wholly impractical scoreboard that would tally up, as the night went on, the number of years the newlyweds had been waiting.

City staffers were adamant that members of the public be allowed to attend, as well as loved ones of the couples professing vows. The rotunda is only so big, however. At any one time, there will be space for about 900.

Color-coded tickets will admit people to different parts of the building. Each couple may have up to 25 tickets, which doesn’t entitle anyone to a seat next to Father of Waters at 12:00.

Guests to observe from above

Instead, wedding parties may observe and wait from higher stories. Each will be assigned a volunteer guide. As each couple’s time approaches, the volunteer will invite them to a space near the council chambers, where they will be asked to write their story in a guest book that will be donated to the Minnesota Historical Society.

Their five-minute ceremony over, each set of newlyweds is invited to go next door to the Hotel Minneapolis, which has donated space for a private group reception where the parties can linger, or retire to discounted rooms.

If they can make their way past the line of food trucks Stiles and Holmaas are sweet-talking into feeding the crowds, that is. (An aside: This just may be the first wedding — let alone 60 weddings — planned and promoted largely on Twitter.)

Ever a man with his eyes on his boss’ end game, Stiles is all too aware that national media are likely to report on the event.

“R.T. really wants this to be a wedding destination,” he said. “There are other places on the coasts where people can go to be married. But he thinks being a state in the heartland that chose to do this is really special.”

Indeed, like St. Paul, Minneapolis has begun promoting itself as a wedding destination, offering free help to out-of-towners.

So with Rybak leaving office at the end of the year, does Holmaas foresee a shift from political organizing to event planning? Probably not. But he is going forward with a bigger community of his own.

“I’m pretty excited about the willingness of people to help,” he said. “I mean, Jeremy e-mailing me at 7 a.m. from Atlanta where he’s putting the finishing touches on his new album?”

Even more than his Messersmith connection, though, Holmaas is thrilled with his new relationships with the people who will be married during the marathon night. The other night he got a tweet on his work account, @mayorsaideandy, from the two couples who will go first, Cathy ten Broeke and Margaret Miles and Al Giraud and Jeff Isaacson.

“Cathy and Al and Margaret and Jeff were all out to dinner together,” he said. “They said, ‘Thanks not just for the planning but for the lifelong friends.’ ”

None of it what was Holmaas imagined when Rybak invited all of Minnesota to a midnight ceremony. Nope, it’s better.