Perched in the crook of one of her dads’ arms, 21-month-old Anna looked down, picked up a morsel of red velvet cake and popped it into her mouth. When she looked up, it was into a thicket of TV and still cameras that had zoomed in, shutters and flashes whirring inches from her front-page-cute face.

Too stunned to cry or move, Anna promptly forgot to chew. She just stared, immobile, a dab of icing clinging to the tip of her pointer finger and a blue-and-gray stuffed elephant toppled on its side on the table in front of her.

Daughter of Paul Nolle and Reid Bordson, one of the same-sex couples whose midnight weddings will be Minnesota’s symbolic firsts, the toddler was helping her fathers pick out a cake in Betty Crocker’s Golden Valley test kitchens.

In addition to red velvet, there was yellow, chocolate and white cake, as well as a number of buttercreams and fillings. All from the company’s Super Moist line, and all arrayed in picture-perfect slices and tiers under a wall lined with portraits of Bettys from various eras.

Among public-relations types the phrase “earned media” is used to refer to favorable news coverage obtained via promotional efforts, as opposed to advertising. In the case of the small army of camera- and microphone-toting journalists who showed up Monday to watch the summer’s most popular brides and grooms sample cakes, General Mills really, really earned the media.

Betty Crocker is donating individual cakes to the first three couples to be married in the Twin Cities, as well as a giant cake for the 60 other couples to be wed at Minneapolis’ City Hall in overnight ceremonies Aug. 1.

For all concerned, this particular product placement is, well, the proverbial icing. Long considered one of the nation’s leading LGBT-friendly employers, General Mills took a strong public stance against a proposed constitutional amendment outlawing same-sex marriage.

Employees walked past small but persistent groups of protesters after CEO Ken Powell announced the company’s position. And he and other executives made personal donations of tens of thousands to the campaign to defeat the ballot question.

“They met those protesters with respect and they [General Mills] didn’t waver in their support,” Bordson reminded the reporters at the tasting while Anna recovered. “It’s very important that this big company was supportive of everyone’s rights.”

As in other states where legislatures have approved marriage equality, the backing of the business community was seen as a crucial element. A January 2012 Star Tribune commentary by Carlson Companies Chair Marilyn Carlson Nelson was a viral sensation.

Quick to lend its support

While a number of Twin Cities employers declared their opposition to the proposed constitutional amendment, General Mills was the second major corporation to do so. (St. Jude Medical was the first.)

“We believe a diverse, inclusive culture produces a stronger, more engaged work force — and strengthens innovation,” Ken Charles, vice president for diversity and inclusion, wrote in a blog post at the time. “Inclusive communities are more successful economically as well. We believe it is important for Minnesota to be viewed as inclusive and welcoming as well.

“A welcoming state is essential to recruiting and retaining the best young talent,” the letter said. “Marriage inequality makes some of our employees second-class citizens. Turnover and a loss of productivity are two of the consequences that come when some employees are denied rights that most of us take for granted, including family issues and end-of-life decisions among many others.” 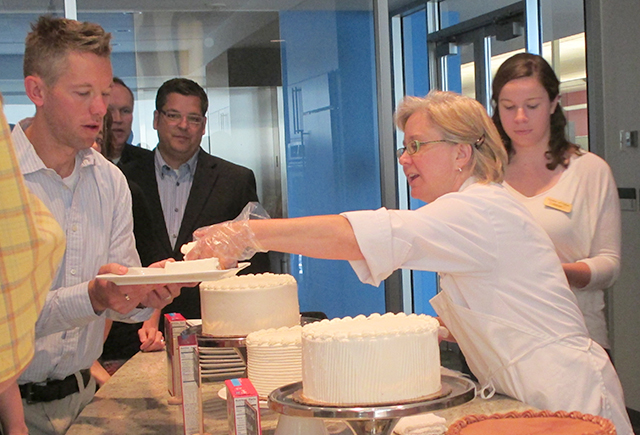 MinnPost photo by Beth HawkinsQueen of Cakes’ Terri Leckas, center right, offers a piece of cake to Reid Bordson, far left, who will be getting married on Aug. 1.

For Betty Crocker, Dayton’s May 14 signing of the bill into law had additional layers of significance. For some two decades, the corporation’s employees have enjoyed support from Betty’s Family, a LGBT networking group. (“Family” being a previous generation’s code word for gay.)

Beyond that, the brand is in the business of understanding how people live — how they make homes, if you will. “For 90 years Betty Crocker has been an advocate for the homemaker,” said Marketing Manager Laura Forero.

And while that once meant — at least in theory — understanding the needs of stay-at-home mothers, the dynamics have changed. In January, the company hired noted family and marriage historian Stephanie Coontz to help it compile a profile.

“It seemed like we needed to know more about what the homemaker looks like today,” said Forero. “As we talk to consumers we need to understand that.”

Among the Families Project’s findings: According to U.S. Census Bureau estimates the number of same-sex couples living together has increased by 80 percent; kids raised in those families report being proud of the values they were taught.

As the tasting drew to a close, one of bride-to-be Margaret Miles’ sisters was attempting to explain Betty’s evolution in the portraits on the wall to Miles’ and Cathy ten Broeke’s 5-year-old son, Louie, who really basically wanted to know whether the original Betty was still alive.

Louie also wanted chocolate cake, with chocolate filling, which sounded just great to Terri Leckas, owner of Edina’s Queen of Cakes, which is preparing the actual cakes using Betty Crocker recipes. Sugar thus mainlined by young and old alike, the betrothed and their loved ones made their way out of the test kitchens bearing baskets of Betty Crocker swag and loads of good will.

Betty Crocker’s Aug. 1 wedding donations are icing on the cake