WINONA — Driving along County Road 6 in Winona County’s Saratoga Township on a warm afternoon, Jim Gurley looks at the rolling farmland and gentle mesas and sees trouble on the horizon.

The township could soon be the site of three mines that would produce silica sand, a key ingredient in the hydraulic fracturing process that’s used to extract oil and natural gas.

Gurley, a member of Winona Area Citizens Concerned About Silica Mining, worries southeastern Minnesota will soon be a hub of the growing industry.

Mining companies, he says, seem to “have the intent to produce as many mines as possible.”

Mitchell Bublitz, spokesman for Minnesota Sands, the company that wants to open two of the three pending Saratoga Township mines and holds leases in Fillmore and Houston counties, disagrees with Gurley on every one of those concerns — except his prediction of a rapid expansion of the sand mining industry here.

“There will be a boom around the corner,” Bublitz says. “This is the tip of the iceberg.”

Debate over frac sand mining has been evolving for a couple of years, but the divide has sharpened in the past few weeks. The Minnesota Legislature did not enact a proposed mining moratorium or broader state regulatory authority in this year’s session, keeping the action at the local government level.

Winona County’s mining moratorium expired in 2012. The Board of Commissioners last month approved an operating permit for a 19-acre Saratoga Township mine after deciding not to require a detailed environmental review. It would be the state’s eighth or ninth active mine and the second in Winona County. Last week, a dozen Winona County residents asked the Minnesota Court of Appeals to stop the mine’s opening, arguing that environmental impacts were not properly addressed.

Other Minnesota communities also are wrestling with the issue. In June, Goodhue County adopted new regulations that limit mines to 40 acres; its moratorium expires in August. The Houston County Board voted in March to extend its moratorium until March 2014. The owners of a frac sand rail loading facility in Wabasha on July 1 filed a complaint in U.S. District Court arguing that the city doesn’t have the authority to require a conditional use permit.

Mining opponents have scored some recent victories, even in Wisconsin, where the industry has expanded from a handful of facilities in 2010 to the nation’s largest, with at least 105 mines and 65 processing sites. Last month the Pepin County Board made a 10-mile strip of bluff land on the Wisconsin side of Lake Pepin a frac-free zone. In Iowa, where there is one active mine, supervisors in Alamakee and Winneshiek counties approved 18-month moratoriums this year. 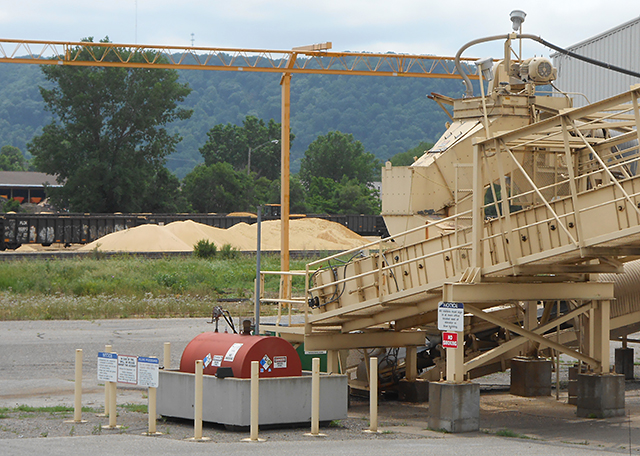 MinnPost photo by Judy KeenPiles of frac sand, background, at a processing facility in Winona.

Those efforts are evidence of the profit potential of silica sand and the increasingly aggressive moves of mining companies to expand operations in the area’s rich deposits of the sort of sand that’s ideal for the oil and natural gas industries.

Despite fluctuations in the price of natural gas and oil, Minnesota Sands’ Bublitz expects demand to grow. “There are coal-fired plants that are generating electricity via coal and they’re switching over to cleaner-burning natural gas,” he says.

The sandstone in southeastern Minnesota and neighboring states is uniquely suited to hydraulic fracturing because of its shape, strength and accessibility and because it is chemically inert, meaning it won’t dissolve during the fracking process, says Tony Runkel, chief geologist with the Minnesota Geological Survey.

The sand was formed millions of years ago, he says, when it was deposited along the shoreline of a shallow sea. Over time, Runkel says, other minerals were washed away, leaving behind mostly quartz, a “very strong, common and relatively inexpensive mineral.” Wind abrasion shaped the quartz into hard, round beads.

Quartz sand exists across much of North America, he says, but “the reason everyone’s coming to Minnesota and Wisconsin” to mine it is close to the surface, not buried under large rock that has to be blasted away.

“There are hundreds of thousands of acres [of the sand] in Minnesota and Wisconsin alone that are at or near the landscape,” Runkel says.

The sand is so close to the surface that it flakes off the bluffs that rise around the Mississippi River and collects at their bases. Those flat-topped mesas that Gurley admires consist of layers of sand interspersed between layers of limestone and other rock. He worries that if mining flattens them out, the quality of the water that is filtered through those layers will be degraded.

Vince Ready, who has raised cattle and Clydesdale horses on about 30 acres in Saratoga Township for 35 years, helped block plans for a frac sand washing plant in nearby St. Charles. Before that, he had never gotten involved in political issues.

“Our house is on top of a frac sand deposit and I’m not going to sell,” he says, but plenty of his neighbors have sold mining rights on their property, increasing tensions in the community.”There is an economic advantage if you have sand on your land, but some people have more moral fiber than that.”

Ready fears that an explosion in sand mining would drive away tourists drawn to the area for its peaceful landscapes, trout fishing and Amish agriculture. He envisions hundreds of semi-trucks loaded with sand roaring through small towns daily would force small, locally owned businesses to close. And, like many mining opponents, he worries that health problems from inhalation of silica dust, including the lung disease silicosis, will surface in a couple of decades.

The Legislature did create a new permitting role for the Department of Natural Resources for mines near trout streams and new air quality rules for particulate emissions will be written by the Minnesota Pollution Control Agency. 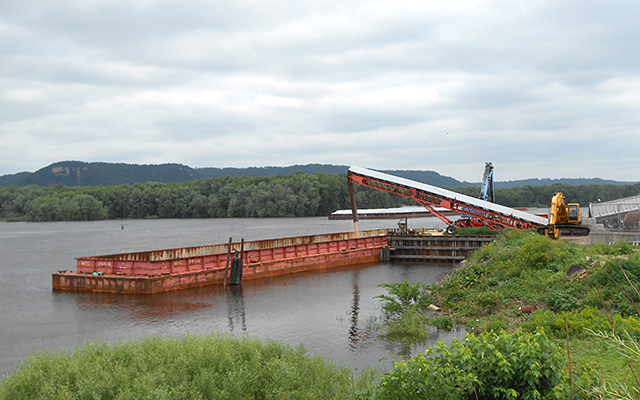 MinnPost photo by Judy KeenFrac sand being loaded onto a barge on the Mississippi River in Winona.

Bublitz says most of those fears are unfounded. There’s no proof that silica dust will make people sick, he says, and mining companies pledge to restore the landscape after mines are closed. The industry creates good jobs and helps farmers stay in business by buying their land or paying for mineral rights by offering “$100,000 for that hill over there that is absolutely worthless,” he says.

Gurley, who has become a full-time activist in the fight to keep frac sand mines from setting up shop here, believes that once people know the full ramifications of mining, they will try to stop it. The economic benefits of mining are “the only argument the industry has: sand equals jobs. And it will bring some jobs,” he acknowledges, but not enough to offset a potential loss in Winona County’s tourism revenue.

Winona County’s unemployment rate in May was 4.7 per cent; the state rate was 5.3 per cent.

Joan Schnabel lives across the Mississippi from Winona in Buffalo County, Wis. The first frac sand mines there were approved almost two years ago and two are now operating. Minnesota communities can learn a lesson from those in Wisconsin, where the industry is much more advanced, she says: “If you do not take an interest in your local government, you will rue the day.”

Mining opponents there were “sound asleep” when the first applications were filed, Schnabel says, and only after that did they begin working to elect members of city councils, county boards and local zoning panels who share their views. “There have always been gravel quarries in these rural areas,” she says, “and people didn’t get the scope of what’s involved in these frac sand mines.”

Gurley says it’s vital, absent stronger state regulations, for local activists to work together to prevent mining companies from cherry-picking locations where there’s less political resistance. “This is a regional phenomenon and a regional problem,” he says. “I believe that legally our governments in this part of the state can ban this industry.”

Mining can be stopped if area residents “stand up and elect people who care about the environment,” Ready says. He thinks it’s too easy for some legislators to dismiss concerns in the area. “Say you went to the shores of Lake Minnetonka and dug up a sand pit there,” he says. “It wouldn’t even have a five-minute shelf life.”

Opponents are motivated, he says. “A lot of people are mad as hell.”