In all of his years in politics, Gov. Mark Dayton never figured to find himself caught in a bear trap.

But there was the governor on Monday, smack dab in the middle of a situation that he never imagined.

In the wake of a meeting with famed black bear “researcher” Lynn Rogers, Dayton was trying to moderate what was supposed to be a news conference involving DNR Commissioner Tom Landwehr. But it was supporters of Rogers, not reporters, who were firing questions at the governor and the commissioner.

“Have you ever been to the North American Bear Center?’’

“I’ve been to Ely,’’ the governor responded.

“Why don’t you go there and see for yourself the great research he’s doing?’’

“I wasn’t elected to mediate disputes among experts,’’ he said.

The questions kept coming. At one point, Dayton, slightly exasperated, said, “Excuse me, this is supposed to be a press conference.’’

Reporters tried to get in a question. Rogers’ supporters were faster – and more assertive.

“Do you understand how much children have learned because of the den cameras?’’

The governor could only sigh.

All of this started a few weeks ago, when the DNR informed Rogers that it no longer would issue him permits to collar bears and that he no longer could use the den cameras that showed bear behavior – including birthing – in their dens.

Landwehr, who managed to stay calm in the midst of hostile questions, said there are two fundamental problems with the work of the 74-year-old Rogers.

One: Because he hand-feeds the bears as a way of getting close to them, the animals are losing their instinctive shyness around human beings. This is making bears in the Ely region more hostile. They see people, they think food.

“This is a public safety issue,’’ Landwehr said, adding that in the last couple of years,  his office has received numerous complaints from people in the Ely area.

“I’m not going to continue to sign permits for hand-feeding bears,’’ Landwehr said.

Prior to the governor and Landwehr facing the Rogers supporters (and reporters), Rogers had sort of dealt with the issue of writing. Essentially, he said, he’s going to start pretty soon. 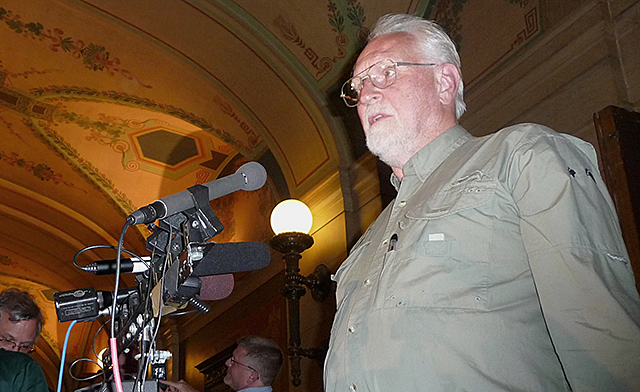 Meantime, Rogers wants to keep receiving permits from the DNR to carry on. After receiving notice from the DNR that the permits were going to stop and that he was to have the collars off by the end of this month, Rogers sought the meeting with the governor.

Rogers described the meeting differently from how the governor and Landwehr described it.

Rogers said that “things aren’t clear’’ about where this dispute is headed.

But both the governor and the commissioner said things are clear: As of now, the 10 collars, which include GPS devices, must be removed by the end of the month.

Dayton did say that Landwehr has gone the extra mile in dealing with Rogers. The commissioner suggested that the matter be handed over to an administrative law judge, who will be given final say. But clearly, Landwehr is confident that the DNR position will prevail. It’s also obvious that no administrative hearing can go forward before the July 31 deadline for Rogers to remove the collars.

Rogers, who has been using the Internet to raise funds for a court defense, intimated that he might go to court, presumably to either halt or at least delay the DNR order.

“We’re considering all of our options,’’ Rogers said.

If it means anything, Rogers does have a lot of clout in the court of public opinion. Monday, for example, there were about a dozen of his supporters toting pro-Rogers signs outside the governor’s office.

Dana Coleman, a former elementary teacher in Andover, said that Rogers’ work has been “amazing’’ for children. 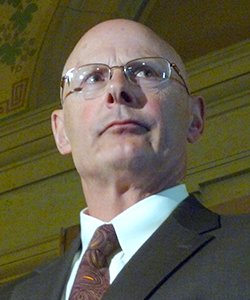 “The den cameras are extremely important for educators,’’ Coleman said. “They could see inside the den for themselves. They were learning things you can’t possibly learn from a book.’’

Others, too, were extolling the virtues of Rogers’ work. His birth videos have been seen by hundreds of thousands around the world.

Rogers defends his hands-on approach to feeding bears. Bears are food driven, he said. By using food, he’s able to get closer to his subject. Ultimately, he said, his research will help people understand bear behavior better.

His hope, he said, is that given expanding populations of bears and people that he can teach people they can “co-exist’’ with bears.

But DNR officials believe the Rogers approach not only lacks science, but is creating more bear-on-people problems.

DNR officials said that their concerns with Rogers work is hardly new. In recent years, a DNR official said, Rogers had received numerous warnings that he must start producing data-driven articles about what he’s learned. Nothing has been forthcoming.

Rogers can continue operating what Landwehr dismissively called “his game farm’’ but the collars and cameras must go.

The DNR has been using collars on bears in other parts of the state to do biological studies of bears. But the DNR does not hand-feed bears in order to put on and take off collars. Instead, agency biologists tranquilize bears to use the collars. Every effort to avoid the sort of human-to-bear contact that Rogers specializes in.

The DNR not only doesn’t hand feed, it doesn’t give bears it’s studying names as Rogers does. “Jewel” and “Fern”  and many other bears have become famous among those who follow Rogers’ bears on video.

Back when he was running for governor, did Dayton ever anticipate that he’d be standing in the middle of this issue?

“Never,’’ said Dayton. “But there are a lot of issues I didn’t expect. It’s what makes the job so interesting.’’