Former Vice President Walter Mondale is delighted that Caroline Kennedy is President Obama’s choice to be the next ambassador to Japan, a job Mondale held for nearly four years under President Bill Clinton.

“The Japanese will love her selection because she represents one of the great names of America,’’ Mondale said in an interview in April, when word leaked that Kennedy might be the pick; he spoke then with the proviso that it not be published until the news is official.

“It will remind the world of the strong relationship between Japan and the United States.’’

Obama announced Wednesday that he is nominating Kennedy, who endorsed Obama over Hillary Rodham Clinton for the Democratic presidential nomination in 2008, to the post. If confirmed, Kenndy would become the first woman to hold that position. 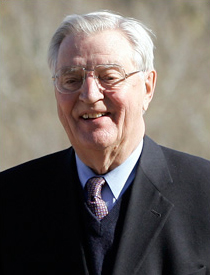 Mondale called the job “one of the many great jobs’’ he’s had in a long career in public service. But it can also be a taxing position, Mondale said, especially in times of crisis in the region.

“There are times, when you’re meeting with the prime minister or the foreign minister that you need to have great discretion,’’ he said.

The great crisis he had to deal with was the fallout surrounding three U.S. servicemen raping a 12-year-old girl in 1995.

That crime and the street protests across the nation that came in its wake created political tensions between the allies led to tense diplomatic meets and ultimately changes in the U.S. Japan Status of Forces Agreement. That agreement, which had been in place since 1960, covered which nation would prosecute criminal cases involving members of the U.S. military. Ultimately, the three men were tried – and convicted – in Japanese courts.

Kennedy, 55, the only surviving child of John and Jackie Kennedy, lived a very private life until 2008, when she endorsed Obama for president.

In Japan, much of her life will be quite public. The ambassador, Mondale said, travels extensively in the country, giving speeches to all manners of trade and business organizations. Whenever a U.S. president or secretary of state is to travel to the country, there also is a heavy dose of public appearances and news conferences.

“She’ll be a huge hit, she’ll get huge crowds wherever she goes,’’ Mondale predicted.

Mondale said he had a great advantage when he accepted the position in 1993. His spouse, Joan, long had been a lover of pottery, including the pottery of Japan. The Mondales immediately were embraced by the country’s “very sophisticated arts community.’’

Kennedy, a lawyer and author of 10 books, also is a lover of the arts.

Mondale said she’ll also make another pleasant discovery when she arrives in Japan.

“There is a huge, magnificent embassy,’’ he said. “The staff there is very gifted. She’ll be able to delegate to very talented people.’’

There are surprise joys to the job, Mondale said. One of the great joys of the Mondales was to host a Thanksgiving dinner for every Minnesota college student they could find studying in Japan.

“We’d make up two, three or more turkeys and all the trimmings,’’ he recalled. “It was hilarious to see how fast they could make that food disappear.’’