Editor’s note: This report is part of a project on post-9/11 veterans in America produced by the Carnegie-Knight News21 program.

Fifth in a series of articles.

Veterans are killing themselves at more than double the rate of the civilian population, with about 49,000 taking their own lives between 2005 and 2011, according to data collected over eight months by News21.

Records from 48 states show the annual suicide rate among veterans is about 30 for every 100,000 of the population, compared with a civilian rate of about 14 per 100,000. The suicide rate among veterans increased an average 2.6 percent a year from 2005 to 2011, or more than double that of the 1.1 percent civilian rate, according to News21’s analysis of states’ mortality data.

Nearly one in every five suicides nationally is a veteran — 18 to 20 percent annually — compared with Census data that shows veterans make up about 10 percent of the U.S. adult population.

“Anytime a veteran who fought our enemies abroad or helped defend America from within our borders dies by their own hand, it’s completely unacceptable,” Rep. Jeff Miller, R-Fla., chairman of the House Committee on Veteran’s Affairs, told an American Legion conference in Washington earlier this year. The suicide rate has remained consistently high, he said, adding that more work was needed to address gaps in veterans’ mental health care.

A 2007 law required the Department of Veterans Affairs to increase its suicide prevention efforts.

In response to the Joshua Omvig Veteran Suicide Prevention Act — named for an Iraq war veteran who committed suicide in 2005 — the department’s efforts include educating the public about suicide risk factors, providing additional mental health resources for veterans and tracking veteran suicides in each state. The VA’s mental health care staff and budget have grown by nearly 40 percent over the last six years and more veterans are seeking mental health treatment.

VA efforts since 2007 have shown some results. The Veterans Crisis Line — a national phone line — has experienced a steady increase in the number of calls, texts and chat session visits from former soldiers struggling with suicidal thoughts. In 2007, its first year, 9,379 calls went to the crisis line. Each year the call volume has increased, reaching a high of 193,507 calls in 2012, totaling about 840,000 overall, according to the VA.

“It’s discouraging to keep looking at the [suicide] rates, and we have to keep plugging away,” said Dr. Jan Kemp, the VA national suicide-prevention coordinator, and program manager of the crisis line. But she said without resources such as the crisis line, “the rates would be higher.”

The VA is analyzing mortality data collected from states and Department of Defense records to try to understand veteran suicides. The task has been “almost impossible” until recent years, Kemp said, because the federal Centers for Disease Control and Prevention does not track veteran deaths and most veterans are not enrolled in the VA system. 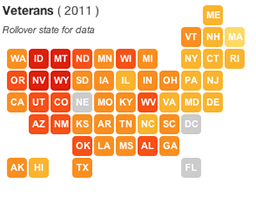 News21 sought data on post-9/11 veteran suicides, but state statistics rarely included identifying information or detailed service records. However, a 2012 report from Substance Abuse and Mental Health Services Administration (SAMHSA) showed that between 2002 and 2005, 144 veterans of post-9/11 wars committed suicide out of a total veteran population of 490,346. In 2009, 98 men and women from post-9/11 wars took their own lives, according to that same report.

A plurality of veteran suicides has been among those 65 or older, according to the data. About 19 percent of suicides that took place between 2005 and 2011 were veterans between 18 and 44 years old, among the 36 states with available age data. It is important to reach post-9/11 veterans early, Kemp said, to help mitigate a potential increase in suicides as veterans approach those vulnerable ages.

“Maybe we can change that trajectory,” she said.

War can exact a heavy toll on the mental health of soldiers, but veterans have the same risk factors for suicide as the general population, said Craig Bryan, research director at the University of Utah National Center for Veterans Studies. Those factors include feelings of depression, hopelessness, post-traumatic stress disorder, a history of trauma and access to firearms.

Veterans experience periods of readjustment as they reintegrate into civilian life. Traits and training needed to survive in a war zone — like maintaining constant alertness — might contribute to troubling behaviors in civilian life, including edgy feelings while being easily startled, according to the SAMHSA report. Suicide warning signs include feelings of being hopeless, out of control, angry or trapped. Combat veterans might experience a variety of stress reactions, including nightmares, sleeplessness, sadness, feelings of rejection, abandonment or hopelessness. Lack of concentration, aggressive behavior, reckless driving, and increasing use of alcohol, tobacco and drugs are other common struggles.

Clinton Hall, 35, lives in Portland, Ore., working as a supply-chain analyst. He served in Iraq and Afghanistan as an Army specialist and was discharged in 2007. One of his close friends, who also was a veteran, committed suicide upon coming home.

“The bad part about it is that he didn’t give us a chance to talk. I mean, if he had just said, ‘Hey, Clint I’m thinking about doing this.’ I could have said, ‘hey, man, I’m thinking about doing it, too. You got to have that conversation. You have to tell somebody, as embarrassing as it is,” he said. “All I ever considered when I thought about [suicide] was the guilt I was feeling and just wanting a way out, wanting to not have those memories anymore.”

Concussions also are a chronic risk factor leading to suicidal thoughts, Bryan said, because head trauma makes people more vulnerable to suicidal thoughts. The dangerous daily routines of a soldier — or simply involvement in sports or accidents — increase the risk of injury.

“It turns up the volume on depression,” he said.

In 2010, Veterans Affairs Secretary Eric Shinseki asked governors to collaborate on collecting veterans’ suicides information in their states. Through November 2012, according the VA report, 34 states had submitted data and agreements had been forged with eight others to provide information.

News21 filed a Freedom of Information Act request for the raw data collected by the VA to this point, but it was denied because the “disclosure of raw research data poses a serious threat to the scientific process” and because of fears the information would be misinterpreted without peer review.

Veterans are over-represented among suicides, compared with the general population, a trend seen in most states between 2005 and 2011.

For the seven-year period, Minnesota had an average suicide rate of 27.7 per 100,000 people, more than double the civilian rate of 13.3, the analysis found.

Massachusetts had the smallest disparity and one of the lowest rates, according to the data, with an average annual veteran suicide rate of 12.3 and a civilian rate of 10.3.

About 26 percent of suicides in Oregon were among veterans, with 96 percent of them being male, according to a November 2012 study by the state’s human services department. New21 analysis showed that 24 percent of all Oregon suicides annually were veterans.

As with suicides in general, veterans taking their own lives have been overwhelmingly male — about 97 percent among the 30 states that reported gender demographics. While suicide has traditionally been a problem among white males, it underscores the suicide risks faced by the U.S. veteran population.

In June, the VA hired 1,600 clinicians to assist with mental health counseling for veterans in compliance with an executive order last year from President Barack Obama. This is only part of the solution, Utah researcher Bryan said, because “veterans don’t come to mental health treatment.” Photo by Chase Cook/News21
Memorials to those lost to suicide border the walkways of the George Washington University Yard. Striding between the luminaries are walkers who completed the 16-mile route. About 2,000 illuminated memorials were placed on the lawn and many walkers examined the memorials as they waited for the closing ceremony to begin.

The challenge is understanding suicide in the general population, Bryan said, and then translating those factors for the military and veterans, who are part of a “unique subculture” in the U.S.

“[Veterans] have different rules and different expectations and ways of seeing themselves” and their roles in society, he said. “What we see in society doesn’t always translate as well into the military.”

Part of that culture is mental toughness, he said, along with “elitism” and “feelings of superiority,” mindsets that render traditional suicide prevention methods less effective. “They are very much like elite athletes,” he said of those least likely to complain of pain or injury.

Hall, who was diagnosed with PTSD following his return home, had a message for veterans who might struggle — as he did — with suicidal thoughts:

“Talk to anybody. If you’ve got a number or an email address for your battle buddies, reach out to them. Chances are, they’re feeling the same way you do. If you don’t have anybody to talk to, call the VA. Call the suicide prevention hotline. Hell, if you can find me on Google, contact me and we’ll talk. But don’t do it [commit suicide]. I’m thinking about it, too. I know other people are, too. But don’t do it.”

Jeff Hargarten is a former MinnPost intern. Bonnie Campo and and Chase Cook were Ethics and Excellence in Journalism Foundation Fellows for News21 this summer.

How we analyzed the data

The “hidden casualties” of veteran suicide have received considerable recent attention, but no agency or advocacy group has gathered comprehensive national and state data about the scope of this tragedy.

News21 has attempted to fill this information gap by making public records requests about veteran suicides from each state health department in the country.

State death certificates generally note only whether a decedent had served in the armed forces at any period in their lives; it is impossible to tell from this data what percentage of them served during the post-9/11 era.

The years 2005 to 2011 were selected for analysis because some states did not have available veteran suicide data from earlier years. Civilian and veteran suicide rates per 100,000 people were calculated using Centers for Disease Control and Prevention (CDC) annual mortality reports and American Community Survey (ACS) population numbers from the U.S. Census Bureau spanning those years.

News21’s rates differ from the CDC’s overall annual suicide rates, which count the entire U.S. population while News21’s calculations are among veterans and the adult civilian population, respectively. The CDC doesn’t separate state-by-state suicide tallies by age in its reports, so New21’s civilian suicide rate is not age-adjusted while the rest of its numbers are purely among adults. Adjusting raw rates for age, gender and race can allow for more direct comparisons, but there was not sufficient data to do so.

Gender statistics among veteran suicides were derived from breakdowns provided by 30 states. About 97 percent of all veteran suicides in those states were males. News21 also received age group data from 36 states. — Jeff Hargarten, News21

For the complete project “Back Home: The Challenges Facing Post-9/11 Veterans Returning from the Wars in Iraq and Afghanistan,” go here.

The “Back Home” project was produced by News21, a national investigative reporting project involving top college journalism students across the country and headquartered at the Walter Cronkite School of Journalism and Mass Communication at Arizona State University.

News21 is funded by the John S. and James L. Knight Foundation and the Carnegie Corp. The Ethics and Excellence in Journalism Foundation, the Hearst Foundations, the Donald W. Reynolds Foundation, Women & Philanthropy at ASU and the Peter Kiewit Foundation funded the work of individual fellows.