Can Minnesota and other states follow the lead of U.S. Attorney General Eric Holder and attempt to reduce the huge numbers of Americans who are sent to prison each year, often for low-level drug offenses?

“Too many Americans go to too many prisons for far too long and for no good law enforcement reason,” Holder declared in a recent speech to the American Bar Association.  “Although incarceration has a role to play in our justice system, widespread incarceration at the federal, state and local levels is both ineffective and unsustainable.”

In 2012, the U.S. prison population declined for the third consecutive year, according to the Justice Department’s Bureau of Justice Statistics. Still, federal and state prisons held nearly 1.6 million people at a cost of more than $80 billion a year.

“It’s not like Minnesota has the lowest crime rate in the country,” says Grant Duwe, research director for the Minnesota Department of Corrections. “Our crime rate is roughly in the middle of the pack. But we do use prison as a sanction much less than other states.”

About 17 percent of Minnesota inmates are confined for drug-related offenses, but Duwe says they have an average of five felony convictions and three drug convictions. “We reserve prison only for the most serious offenders,” he says.

Kevin Burke, a Hennepin County district judge for 29 years and twice its chief judge, says it would be “naïve to think that, overnight, we can get rid of the 17 percent who are in the prison for drugs. That’s just not going to happen.”

But Burke believes Minnesota could be more strategic in determining who it locks up and for how long.

“I think you can make the argument that way to reduce the cost of incarceration of drug offenders is a combination of sending more people to treatment, sending fewer people to prison, making sure that those people who do go to prison have really good treatment available and then not necessarily keep them there as long,” he says.

Some sentences too long?

Burke would reexamine Minnesota’s sentencing guidelines for drug offenses, saying some of the state’s sentences are out of line with other states.

Thanks to get-tough-on crime laws, the average time served by a drug offender in Minnesota doubled—from 1.1 years to 2.2 years—between 1990 and 2009, according to a report last year by the Pew Center on the States, a nonpartisan research and advocacy group.

“For a first offense for a controlled substance in the first degree, which would be a drug sale with no prior criminal history, the presumptive sentence is 86 months,” Burke says. “There is a very high departure rate [by judges] on that sentence and there is quite a bit of plea bargaining to facilitate that.”

While judges have considerable discretion in sentencing first-time offenders, Burke says, appellate courts have left them with little choice for second offenses other than “to lock these people up.”

Kathleen Gearin, a recently retired Ramsey County district judge and former chief judge of her county, says she is, too, is troubled by some of the mandatory minimum sentences for drug offenders.

“If they aren’t involved in other crimes of significance more than small-amount shoplifting, we’re spending too much money on prisons for drug users, not dealers,” Gearin says. “Let’s spend our time and money going up the ladder to the distributors. They aren’t doing it because they are addicted. They are doing it for money—and they don’t care about the misery they cause families and the people who are using drugs.” 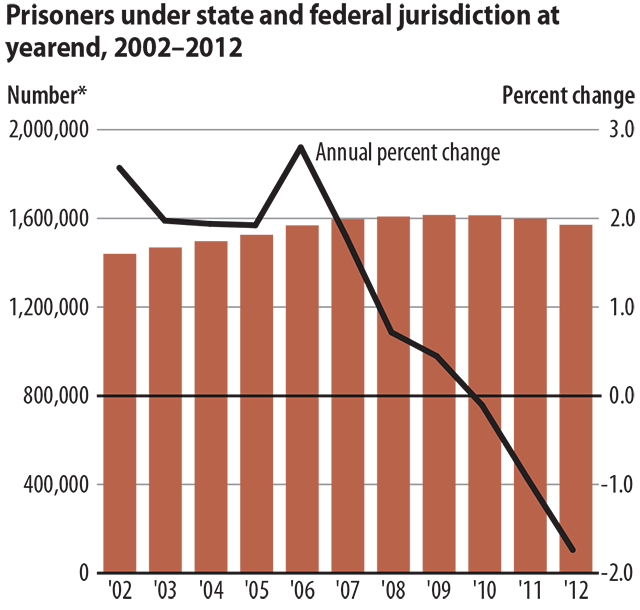 Note: Jurisdiction refers to the legal authority of state or federal correctional officials over a prisoner, regardless of where the prisoner is held.

*Total and state estimates in 2012 include imputed counts for jurisdictions that did not submit National Prisoner Statistics (NPS) data in time to be included in this report. See Methodology for discussion of imputation strategy.

Another key, Burke says, is having the right treatment programs available. He says a large percentage of drug offenders have mental-health issues, while many others are “self-medicating” to deal with the effects of sexual and domestic abuse.

As a result, he says, one size does not fit all—that you often need treatment programs that are tailored for different types of offenders.

Burke says you also have to create some kind of support system for offenders who have been through treatment, but are prone to relapse once they are released.

“It is very difficult for ex-cons to get jobs,” he says. “A lot of them—their personal relationships with spouses have been destroyed, kids have been estranged and all the kinds of things that could provide a support system for sobriety are quite damaged.”

For offenders who receive treatment while in prison, Burke says, the state often falls short in providing continuing “after-care” programs to help them remain drug-free.

Duwe agrees that there is room for improvement in this area. For offenders who complete treatment in prison, he says, the recidivism rate is 17 percent to 25 percent lower than for other offenders. But he adds that the results are much better for the 10 percent who continue to participate in drug programs following their release.

One approach that is showing good results in Minnesota and across the nation is the drug court system. Drug courts, an alternative to the traditional court system, keep individuals in treatment long enough for it to work while supervising them closely. For a specified term, usually one and a half years in Minnesota, participants:

Burke started Minnesota’s first drug court in Hennepin County in 1996 and served as its judge for nearly five years. Today, there are some 40 drug and/or DWI courts operating in Minnesota.

Last year, the Minnesota Judicial Branch completed a study of the drug court system that examined the results of 535 people who participated in the program and compared them to a random sample of drug offenders with similar characteristics who were processed through the traditional court system.

Judge Robert Rancourt of Chisago County has been a leader in the drug court movement nationally, and he was honored earlier this year by the National Association of Drug Court Professionals.

How Minnesota can reduce its prison population