One of the great mysteries of the 2013 legislative session was the failure to pass a minimum-wage increase.

With the DFL holding across-the-board political power for the first time in more than two decades, a substantial increase in the minimum wage seemed a no-brainer.

In fact, both the House and Senate did pass minimum wage increases, but the Senate version was so tepid — an increase to $7.75 by 2015 — that it died of apathy in the House as the session closed.  (There’s currently a two-tier minimum wage in the state, $6.15 and $7.25, although realistically, most minimum-wage workers receive the higher amount.)

The push for a meaningful increase began again Tuesday as a coalition of DFL House members, labor and religious leaders and heads of some nonprofit organizations held a rally/news conference at the State Fair.

They want to see the minimum wage increased to $9.50 by 2015, the amount that the House DFL passed in the last session.

In the minutes before the rally was to begin, Gov. Mark Dayton asked if he, too, could attend the event. He was welcomed with open arms.

An increase in the minimum wage didn’t seem to be a top priority with the governor last session. But he appears ready to push hard for $9.50 now — perhaps, even more.

Dayton doesn’t use the term “minimum wage.’’ He uses the term “living wage,’’ generally meant to be the wage needed for a person to support a four-person household. In today’s economy, a “living wage” would be about $13 an hour.

The governor seems baffled as to why increasing the minimum wage is so difficult.

“If we’re underpaying people, taxpayers have to make up the difference,’’ he said. “It [a living wage] is as conservative of principle as you can get.’’

That point — that taxpayers subsidize businesses that pays low wages — is a constant in this debate.

Bernie Hesse, political director of the United Food and Commericial Workers, says that taxpayers are subsidizing every “big-box store’’ to the tune of $500,000 a year with programs for the poor. Low-paid workers, he said, must rely on public housing subsidies, medical assistance, school lunch programs  and a laundry list of other public services to survive.

But Dayton’s notion that “a livable wage” is a conservative principle has not exactly caught fire with Republican legislators. Not a single GOP member of the House or Senate supported an increase in the minimum wage last session. None appears to be seeking to get on board the minimum-wage bandwagon now, either.

Republicans continue to say that an increase in the minimum would hurt businesses — especially along the state’s borders — and would ultimately create layoffs.

The key role for Dayton, then,  will be to put pressure on Senate Majority Leader Tom Bakk.

“We just sort of ran out of time,” Bakk said at the close of last session when asked about the failure to act on minimum wage.

But Bakk never showed much enthusiasm for a minimum wage increase throughout last session — and he certainly wasn’t excited by the House version, which not only increased the minimum to $9.50 but did such things as reduce the work week to 40 hours from the current 48. (The 48 -hour work week is pushed by the ag industry and resort owners, because of seasonal work surges in those industries.)

There are many theories as to why Bakk — and the Senate DFL caucus — has been so shy on this issue that has popular support.

MinnPost’s James Nord reported at the close of last session that Bakk used the minimum wage as a bargaining chip with the GOP. He got needed Republican votes on a bonding bill for Capitol repairs in exchange for not acting on a bullying bill and the minimum wage, three sources told Nord.

Bakk denied making the end-of-session trade-offs. However, he can’t deny that an increased minimum wage was never a priority. There likely are a number of reasons for that. 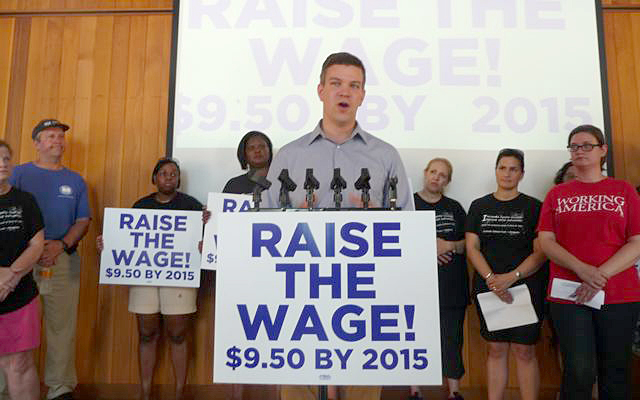 MinnPost photo by Doug GrowRep. Ryan Winkler, who’s leading the push for the $9.50 wage, makes his case during the State Fair news conference.

Many progressives, including DFL legislators, believe Bakk bent over backward to “listen” to business leaders in the state. He frequently mentioned his conversations with the business community during the session.

In part, Bakk may listen so closely to business because his caucus now includes several “pro-business’’ DFLers from the suburbs. They won traditional GOP seats by vowing they were not your father’s tax-and-spend sort of DFLer.

Bakk also understood that the session included many “tough votes” for moderate DFLers. There was the fourth income-tax tier. The toughest vote of all was the vote to give day-care and personal-care attendants the right to organize unions. That vote was accompanied by heavy, heavy lobbying from unions.

In the end, Bakk said he could not have found enough Senate votes to support anything approaching the House level of a minimum-wage increase.

House DFLers raise their eyebrows at such talk.

Shar Knutson, president of the AFL-CIO, suggested that perhaps supporters of a substantial increase in the minimum wage assumed that it would be relatively easy to pass last session.  There will be no such assumption this time.

At the State Fair, Knutson was surrounded by minimum-wage workers from a number of different jobs and ethnic backgrounds.

There was a mom, Jessica English,  with roots in rural Minnesota, who spoke of stocking shelves at a  grocery store and then going home to face four children and an empty pantry.

There were others as well, telling stories that once got DFL hearts pounding.

“Our coalition is growing every day,” Knutson said. 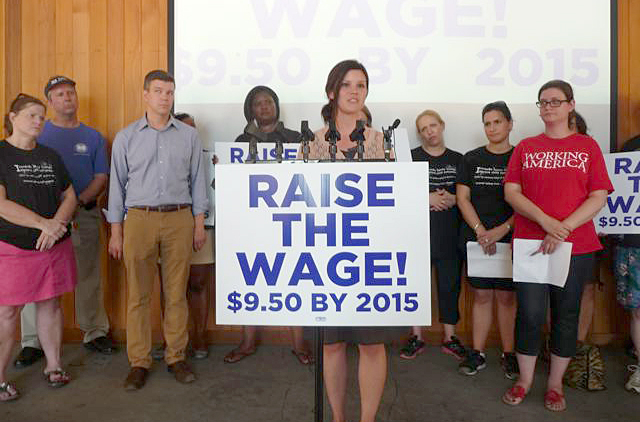