For Randi and Phil Reitan, Wednesday evening was a chance to celebrate – and breathe a sigh of relief — for their son, Jacob.

Jacob and his parents joined about 600 other people who flooded the Wilde Roast café in Minneapolis to celebrate at midnight, marking Aug. 1 as the official day gay marriage became legal in Minnesota.

The Reitans have worked tirelessly for gay rights since shortly after Jacob explained to his parents that he was gay about 15 years ago.

They are just one family in a dedicated movement of Minnesotans who managed — against the odds — to beat back a constitutional ban on gay marriage and then lobbied lawmakers to legalize it less than a year later.

Wednesday evening’s celebration offered a chance to commemorate a final victory for gay marriage — at least in Minnesota. The crowd included quite a few beaming couples who danced, kissed and popped champagne once midnight rolled around.

At Minneapolis City Hall — and all around the Twin Cities — couples began exchanging vows as midnight passed.

“It’s something we dreamed about for a long time, and it’s been so long, but it’s been so fast,” Phil Reitan said, reflecting on the celebration that he worked so hard to make possible. “To watch this whole country evolve and change and celebrate the way everybody is celebrating tonight, it just is thrilling.”

“There’s just such a sense of relief for me,” added Randi Reitan. “I didn’t want to die knowing that my son didn’t have equality … There was this burden as a mother. You want your son to have equality.

“I feel like there’s something that’s happening up in the universe or something to change the whole world,” she said. “It’s just amazing.”

Jacob — and others, including Richard Carlbom, who headed the campaign to legalize gay marriage here — sees his parents as two of the many heroes of a movement that didn’t have a lot of victories just a short time ago.

The Reitans have traveled across the country fighting for gay rights, speaking with lawmakers, church officials and everyday people. They lobbied legislators in Minnesota over the past two years to make their case.

Carlbom, who milled around the party like one of the popular kids in high school, praised the hundreds of other revelers who he said made victory for gay-rights advocates possible.

“People put in hundreds and thousands of hours over the last two years to make this night happen, and to see them celebrate, it gives me energy … These people just pick me up and just give me hope,” Carlbom said. “They did it. In my heart of hearts, they are the ones who did it.”

Tom DeGree, a co-owner of Wilde Roast, said he and his soon-to-be-husband, Dean Schlaak, decided to throw the party for all of the couples who had been married in other states who became legally married in Minnesota when the law took effect Thursday.

DeGree said he didn’t want those couples to have to wait to be recognized until the 2020 census comes out. He and Schlaak will be married Saturday in White Bear Lake.

“There needs to be some type of communal celebration,” DeGree said, taking a break from prepping the champagne for the countdown to midnight. “They wanted to be a part of history.”

Chad Kampe, who stood with his nearly official husband Matthew Felt, volunteered on the phones for Minnesotans United for All Families, which coordinated the campaign to legalize gay marriage here. He also turned over the proceeds from a dance party he hosts in Northeast Minneapolis to the campaign.

Kampe and Felt, who were married in Massachusetts, had two weddings to attend early Thursday morning. 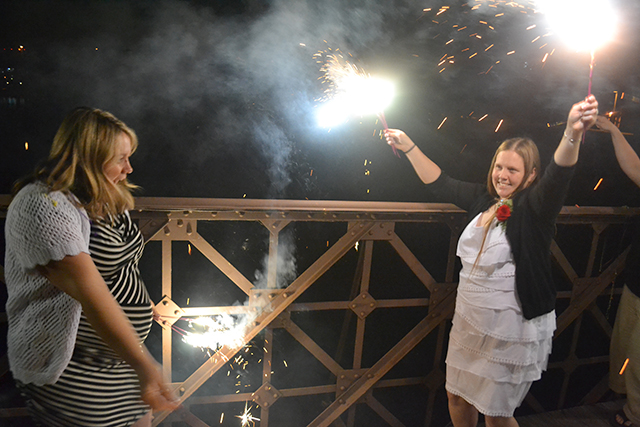 All that work paid off for Amanda Quigley and Jenny Monroe, who were married at midnight on a bridge, just a block from the party.

A group of friends and family gathered around Quigley and Monroe to finally see them joined together legally.

Their friends lit off fireworks and sparklers, and just like that, two women were married in Minnesota.

Unsung heroes of gay-marriage campaign get their chance to celebrate