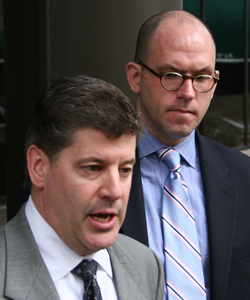 Michael Brodkorb, former Minnesota Senate communications director, has settled his wrongful-firing case for $30,000, a fraction of the damages he was initially seeking. In an interview, he sounded elated and even victorious.

“There is no amount of money that can make up for having this resolution,” he said.  “This is the first day of waking up with a fresh start.”

Brodkorb was fired in December of 2011 by members of the Republican caucus because of a romantic affair with then-Senate Majority Leader Amy Koch. Koch subsequently resigned her leadership position and did not run for re-election.

Their relationship was the basis for Brodkorb’s lawsuit in which he claimed that other members of the Legislature had engaged in similar liaisons but subordinate staff members were not fired as a consequence.

Brodkorb promised to name those names in depositions and, ultimately, during a trial. The threat appeared to be based in enough fact that it heightened anxiety levels every time a morsel of the pre-trial proceedings became public.

The man who is credited as a highly talented but equally demanding political operative said he understood the burden of unwanted publicity.   “This has been rough on me and my family and it would’ve placed other families under the same kind of scrutiny,” he said. “I’m glad that this will not be coming out in the courtroom.”

So are members of the Senate, who authorized the expenditure of more than $300,00 to defend the Senate, which, they maintained, acted appropriately in dismissing Brodkorb. A trial would have provided a constant back-story to the 2014 election cycle.

“We are pleased to have successfully resolved this matter in the best interests of taxpayers and the institution of the Minnesota Senate,” Tom Baak, Senate majority leader, said in a statement.

Senate Minority Leader David Hann added in the same statement: “I am pleased that this agreement acknowledges that the facts of the case do not support any of the claims against the Senate and that the case has been dismissed.”

State Sen. Dave Thompson, a Republican candidate for governor who never had any direct involvement in the case, said it was a “tremendous relief to have the case removed from the political discussion.”

Brodkorb said he feared the lawsuit would harm Republicans chances in 2014. “I didn’t want to see a repeat of what happened in 2012,” he said, referring to the loss of Republican control of the Legislature.

Under the terms of the settlement, Brodkorb pays his own legal fees and acknowledges that the facts of the case didn’t support his claim. But the latter point, he said, was a legal technicality “because we were just in the initial phase of discovery.”

Brodkorb expressed puzzlement at the suggestion that the $30,000 settlement was equal to a severance package the Senate had first offered.

“To go back and say that there was at some point an offer of severance, something similar to this, I am lost as to say when this happened,” he said.  “When [former secretary of the Senate Cal] Ludeman met me at a bar to tell me I lost my job, he didn’t come to the table with the severance offer.”

But that is history, as far as Brodkorb is concerned. He said he will concentrate on his political blog, politics.mn, and other projects.

“I’m going to sleep like a baby tonight for the first time in a long time,” he said. “I’ve got my whole life in front of me again.”