“But’’ and “however’’ became the key words of Monday’s special session of the Minnesota Legislature.

Under rules of the special-session game, agreed to in advance by the governor and legislative leaders of both parties, only a disaster aid bill could be debated. A laundry list of other bills — ranging from de-funding public financing of the Vikings stadium, to undoing a variety of taxes, to prohibiting bullying in schools — was neatly dispatched to committees.

This did not mean legislative tongues were tied.  There’s no rule mighty enough to silence a pol who feels a need to talk.

Praise, then a ‘but’

What happened Monday is that Republican legislators would start by praising the goodness of the $4.7 million disaster aid bill and then add a “but’’ or “however,’’ and off to the verbal races they’d go.

For example, Sen. Gary Dahms, R-Redwood Falls, talked about disaster aid being a good thing but then talked about “climate change theory.’’ He said some in the chamber believed in climate change, some don’t. But certainly all could agree that the “tax change climate … is a disaster for all counties.’’

Over and over again, Republican legislators praised disaster aid BUT then predicted a future of  gloom and doom for Minnesota because of taxes passed last session by the DFL Legislature and signed by the governor.

Not surprisingly, many of the Republicans who felt a need to speak are seeking higher office. Sen. Dave Thompson, R-Lakeville,  and Rep. Kurt Zellers,  R-Maple Grove, both are running for governor. They both used the special session as a soapbox.

They expressed a different view of the tax that’s breaking the back of the Minnesota economy.

Thompson says it’s the “warehouse tax.’’ That’s the the sales tax that third-party warehouses must charge, based on value of inventory, to companies that lease warehouse space. The tax won’t take effect until next April, but Republicans, including Thompson, says it’s a tax that’s driving warehouses to other states.  The tax, he said, should have been repealed in this special session.

Zellers seems to think it’s the sales tax being charged on farm equipment repairs that’s driving business out of the state as farmers take their tractors and combines and manure spreaders to other states for repairs.

This tax, Zellers said, is “slowing the economy. … It’s costing Minnesota jobs.’’  This tax, he said, should have been repealed in this special session.

Sen. Julianne Ortman, R-Chanhassen, who is hoping to be her party’s candidate against U.S. Sen. Al Franken, felt compelled to step up, too. Like Thompson, she seemed most focused on the warehouse tax. Warehouses, she said, employ 14,000 people in Minnesota, and the warehouse tax puts the jobs at risk.

Taxes. Jobs at risk. Economic woe just ahead.  These just might be the themes of Republican campaigns in the coming months.

Sen. Paul Gazelka, R-Brainerd, just heard from a constituent who just might take his (un-named) company and its 45 jobs to South Dakota.

Sen. Dan Hall, R-Burnsville, was just talking to a constiuent who said, ‘Dan, I’m moving my company to Florida in five years. I spend half the year there anyway.’ ’’

Sen. Sean Nienow, R-Cambridge, was just talking to a guy who runs a cheese plant “who planned to expand and add 20, 30, 40 people! He’s not going to do it now because of the taxes.’’ 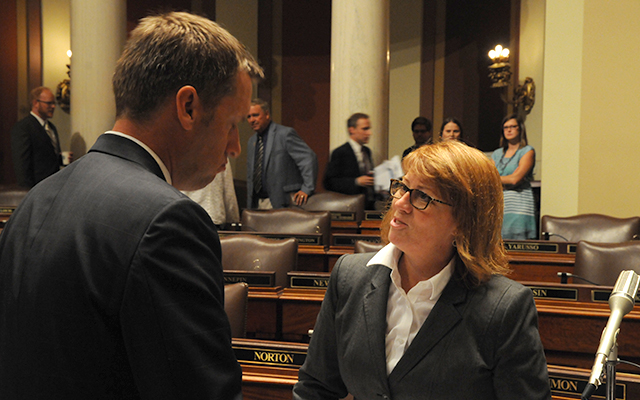 Mostly, DFLers listened without responding, although after the session was adjourned, they made a few points:

• Both Senate and House leaders said that the governor and DFL majorities had the cash on hand to repeal the sales tax on farm equipment repairs. That tax is expected to bring $28.6 million into the general fund over the biennium and currently there’s about $40 million in “bottom line’’ cash in the budget.

“They didn’t want to do that,’’ said Rep. Erin Murphy, the House majority leader. “They wanted it all [all new  taxes repealed] or nothing.’’

Is that true?  Did the GOP pass up a chance to get rid of one of the taxes they say is “killing Minnesota jobs?’’

Rep. Kurt Daudt, the House minority leader, sort of agreed with that. But, he said, the $40 million, the DFLers are talking about, will end up being part of the payback of money borrowed, in the Pawlenty years, from the schools.

• Both Senate Majority Leader Tom Bakk and Murphy noted that during the last session and during the lead-up to this special session, Republicans never proposed ways to pay for the taxes they say must be repealed to spare Minnesota.

Other DFL legislators made it clear that they’re comfortable with the work of the last session — and they’ll be happy to take their message to the voters.

Rep. Melissa Hortman, DFL-Brooklyn Park, talked about some of those messages. Taxpayers are receiving all-day kindergarten, more investment in early childhood education and college tuition freezes in the DFL budget.

In other words, there wasn’t much that was surprising about the underlying messages in Monday’s special session.

Which doesn’t mean there weren’t surprises.

For example, few places in Minnesota came out of the last legislative session more blessed with public dollars than Rochester, which will receive in coming years more than $300 million for the huge city/Mayo Clinic remake.

Yet, Sen. Dave Senjem, R-Rochester, felt compelled to bash DFL leadership, proclaiming that there’s “a looming economic disaster’’ in the state because of “certain provisions in the tax bill.’’

It seemed like s funny way to say “thanks.’’

But perhaps the biggest surprise of the day was on the House side, where Rep. Jim Abeler, R-Anoka, chose NOT to speak, even though he’s running for the chance to represent his party in the U.S. Senate race against Franken.

Why didn’t he speak?