African-American and immigrant groups that key lawmakers say were overlooked in MNsure’s initial outreach grant program now likely will be funded with cost savings from elsewhere in the exchange.

The board of Minnesota’s health insurance exchange on Wednesday authorized up to $750,000 in new outreach funds to organizations that didn’t make the initial recipient list.

The move came after the health exchange board and staff took heavy fire from lawmakers on both sides of the aisle, including from Gov. Mark Dayton, for not funding black and immigrant groups that want to help enroll people in MNsure.

With only $4 million in grants available, MNsure leaders told lawmakers on Tuesday that there wasn’t enough money to go around for all the strong applicants seeking funding. Thirty of the more than 100 groups ultimately were awarded grants in late August. Aid requests totaled nearly $20 million.

Sen. Jeff Hayden, a DFLer from Minneapolis, harshly criticized the exchange for leaving out “legacy” organizations that work with African-American communities, such as the Minneapolis Urban League and the Stairstep Foundation.

“They certainly heard, as they should, from those who were rightfully indignant that they were excluded from the outreach funding,” Dayton said. “I hope the board will act with additional funds to remedy that, and I hope that they won’t repeat that mistake again.”

At Wednesday’s board meeting, Todd-Malmlov detailed plans for the patch-up funding plan.

At first though, the board appeared reluctant to act without more information about the source and scope of the additional funding but ultimately approved the measure unanimously.

“When I looked at the grant recipients, I thought there were gaps,” Jesson said, but defended the exchange as a “huge lift” that’s prone to “glitches and mistakes” because it has to be finished so quickly.

Todd-Malmlov said savings from implementing the exchange’s training programs for brokers and navigators and delayed consumer testing were the two biggest areas that allowed staffers to free up the nearly 20 percent bump in grant funding.

In addition to the $4.75 million now available in outreach grants, the exchange is also offering $11 million for pay-for-performance awards to more than 250 nonprofits and more than 1,400 insurance brokers that sign individuals onto the exchange.

Board members discussed shifting some of the money from those initiatives into the grant program, and board Chairman Brian Beutner said the seven-member panel could decide in the future to do that.

It’s also unclear what effect the new funding will have in terms of future groups publicly pressuring the board if they don’t get the funding they want.

“I would not characterize it [the new grants] as a payoff,” said Beutner. “I would see it much more as the Legislative Oversight Committee doing exactly what they’re charged with doing, which is providing some guidance.” 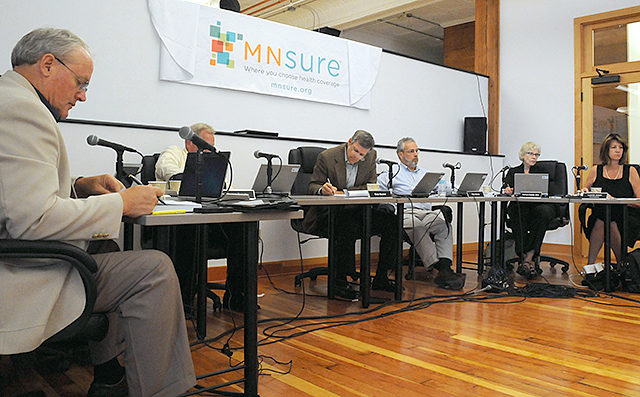 MinnPost photo by James NordThe MNsure exchange board on Wednesday authorized grants of up to $750,000 in new outreach funds to organizations that didn’t make the initial list.

Republican lawmakers, though, had wanted a re-evaluation of the groups that received the funding, not just a pile of new money. GOP lawmakers have raised concerns about a handful of organizations that they say shouldn’t have gotten the grants.

Todd-Malmlov said the exchange is still negotiating the contracts with the 30 named grant recipients. Some organizations could drop out, or the exchange could negotiate to give out a smaller grant, freeing up additional funds, she said.

Grant sizes range from $2,000 to $200,000 for individual applicants and up to $500,000 for coalitions, so Todd-Malmlov was unable to specify how many new organizations would be able to receive funding. Exchange staff will spread the $750,000 among the original pool, and the money won’t be available to new applicants.

The exchange took a hit from Hayden for not including a person of color on the staff that evaluated the grants. But that doesn’t appear likely to change for this round of consideration, either.

“We’re going to use the criteria that we have used,” Todd-Malmlov said. “What we’ve run into is that we got 109 applicants. We could only award 30 of them … we haven’t been able to meet all the need.”

Beutner noted that the grant process began without much board involvement before the seven-member group took over legal authority for the exchange. Wednesday’s meeting was the first one with the board fully in charge.

“We as a board were not as engaged,” Beutner said. “Less likely to happen in the future is our goal.”