Legislators almost unanimously passed $4.7 million in state disaster relief funds during Monday’s special session but disagreed sharply over tax-repeal measures that Republicans have been calling for since the beginning of summer.

Gov. Mark Dayton convened the special session to provide disaster relief to 18 counties affected by severe storms in late June that also matches roughly $18 million in federal support. GOP lawmakers had been calling for a special session since June to tackle several sales tax provisions included in the DFL’s budget for the next two years.

Lawmakers almost universally praised the opportunity to help affected cities and Minnesotans, but Republicans – and some Democrats – went on the offensive against the new business-to-business sales taxes, which they said are driving jobs out of Minnesota.

Republicans used the special session as an opportunity to criticize Democrats for new sales taxes related to warehousing, farm equipment repair and telecommunications. Many GOP lawmakers running for higher office took the opportunity to lambaste DFLers for not being open to removing the taxes.

“It was pretty clear that they are not interested in repealing these taxes,” Senate Minority Leader David Hann said shortly after the Senate passed the disaster relief measure 59-0. “It’s inexplicable to me. These are taxes that are harming … ordinary Minnesotans.”

The House passed the disaster relief package 127-1, with only St. Paul DFLer Alice Hausman voting no. She had wanted Ramsey County included in the aid declaration.

Senate and House Republicans framed the day as positive for offering natural-disaster relief but a “missed opportunity” to address the “man-made disaster” of the tax measures.

“Every member, obviously, has an election certificate and strives to represent their district as best as they can,” House Minority Leader Kurt Daudt told reporters before the measure passed. “There’s a lot of desire to repeal these taxes on our side of the aisle, and Democrats have indicated they want to repeal them as well, but we haven’t seen their actions match their words.”

GOP lawmakers introduced a stack of bills to repeal the various taxes, with some DFL support. The session, though, was confined to the disaster relief measure as part of an agreement between legislative leaders and Gov. Mark Dayton.

They wrapped up their business and adjourned a short time ago after a few hours of debate.

Leadership from both parties recognized that the bills to repeal the new taxes were largely symbolic and meant to carry the discussion into the 2014 legislative session, which begins in late February. 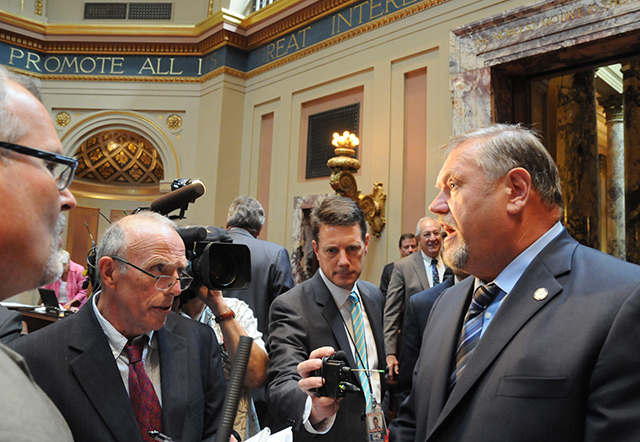 Rep. Joe Atkins, a DFLer, signed on to a measure to repeal the warehousing tax.

“At this point, the effort today was to tee the issue up and make sure to let folks know that it’s both Democrats and Republicans that are concerned about it,” he said.

DFL Rep. Tom Anzelc, who voted for the tax bill last session, signed on to a measure to repeal the farm equipment repair tax. He said agreeing to the measure was a mistake forced onto the House by the Senate at the end of the 2013 session.

Senate Majority Leader Tom Bakk told reporters after the Senate vote that DFLers were willing to consider repealing the farm equipment tax but that Republicans rejected carving out a single-area exemption in private meetings.

“They decided if they couldn’t get it all, they weren’t going to do any of it,” Bakk said, noting that the state didn’t have enough money available to lose the revenue from all the new taxes.

Hann, the GOP minority leader, said DFLers shouldn’t choose just one sector to favor. Republicans argued that with a $38 billion state budget, lawmakers could easily offset a couple of hundred million dollars to pay for repealing the taxes.

It’s unclear whether the taxes will be repealed next session. Murphy said DFLers were “thoughtful” about how to address the issue, and said legislative leaders could come to a deal if the cost of repealing the taxes was offset somehow.

“We have to pay for them. We have to balance the budget. That’s our job,” Murphy said. “Just like everything else, we will consider those issues in the context of the upcoming session after the forecast and as we move forward.”

Bakk stressed that the upcoming state economic forecasts in November and February could be rosy enough to allow lawmakers to repeal the taxes and backfill the holes with extra revenue. But roughly $400 million in money owed to Minnesota’s school districts stands in the way of that becoming reality.

Hann is not convinced that DFLers will actually step up to repeal the measures.

Former House Speaker Kurt Zellers, a Republican, looked forward to the next session: “It makes me proud as a Minnesotan to see us come together. There’s a missed opportunity today … hopefully in the next legislative session we’ll be able to take these issues up.”

Legislators agree on disaster relief but disagree on tax-repeal measures