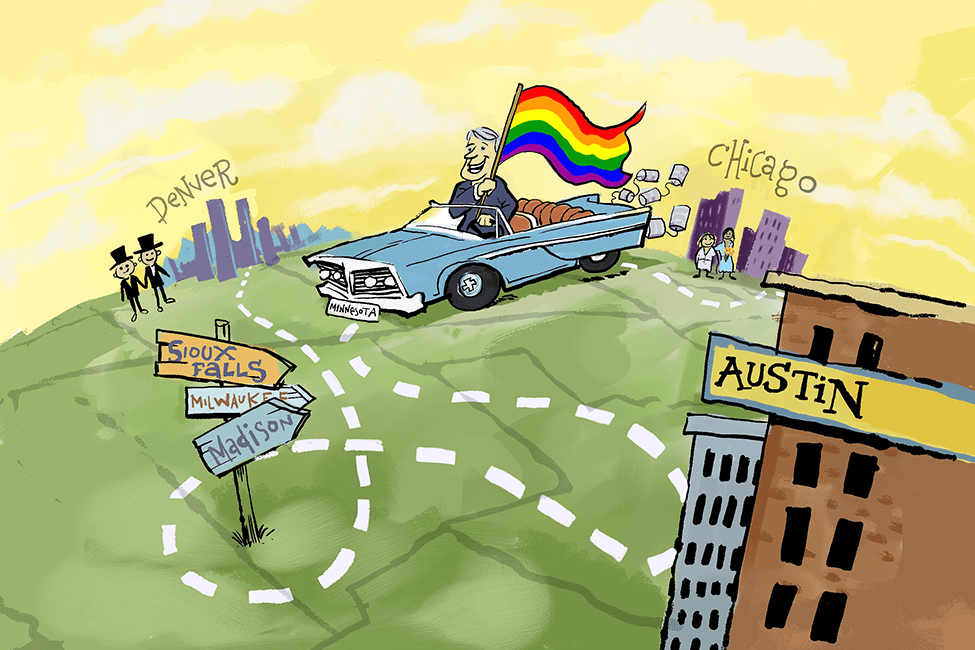 On the morning after he had married 47 gay couples in ceremonies at the Minneapolis City Hall, Minneapolis Mayor R.T. Rybak went home for a short nap and then returned to his office.

“Now what?” he wondered.

His communications director, John Stiles, showed Hizzoner a map of the U.S. The 12 states (and the District of Columbia) where gay marriage is legal were in red; the rest, in black.

What is stunning about this map is how Minnesota and Iowa stand out alone in a sea of black. The other states where marriage is legal are bunched on the coasts.

“Think of all the couples from Austin, Texas, to Chicago to Denver, St. Louis and Kansas City,’’ he said. “Think of all those people. Now think, the only places in the entire center of the country you can get married are in Iowa and Minnesota.”

The idea of a promotion for Minneapolis was born. There’s an ad campaign: “I Want to Marry You in Minneapolis.” There’s a Meet Minneapolis web page devoted to everything from where gay couples can get a license to where they can rent formal wear.

And, there’s a mayoral tour.

Rybak has been to Chicago, Milwaukee and Madison promoting the idea of couples coming to Minnesota to marry – and to settle down in a place where all people are treated equally.

“We thought a tour might get a little publicity,” said Rybak. “But we were stunned at what happened in Chicago.”

A media circus is what happened in Chicago when the mayor showed up earlier this month. He was on every local television morning show. The story of his tour was told on the front page of the Chicago Tribune. It was told in USA Today and on National Public Radio, and it was the talk of talk radio stations throughout Illinois.

“Not a bad return for the $130 cost of an airplane ticket,” Rybak said. (For those of you concerned about the city budget, money for the ticket came from Meet Minneapolis, an arm of the city’s convention bureau.)

There’s multi-layered reasoning behind the mayor’s decision to promote gay marriage, which became legal in the state on Aug. 1.

“In some states we might not have much of an impact [in promoting gay marriage],” Rybak said. “It’s likely not going to make much of a difference if I go to Texas. But in a state like Illinois, maybe this helps push it over the top. We’re not only talking about it as a rights issues, but an economic issue.”

“You don’t want to come off as a mercenary, but this is a huge opportunity,” said Rybak. “Everywhere you go, there’s a competition to attract creative people to your community. … Denver makes a case for why it should be the most attractive place for creative people. We can say, ‘You can be in Minneapolis and be embraced and have equal rights. Or you can move to Denver with your partner and when you get a form and it says, ‘Married,’ you’ll have to mark ‘No.’ 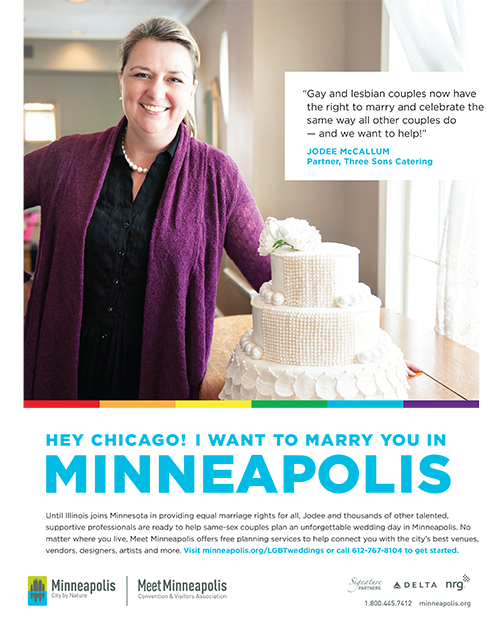 “Minneapolis always has been a talent magnet for all sorts of people,” Rybak continued. “This becomes another reason.”

Gay marriage doesn’t become a positive message exclusively for same-sex couples. He said that this is a message to all young people who are seeking a tolerant environment in which to live.

It’s too soon to know what the economic impact will be for the city or the state in all of this.

But Rybak cited the Associated Press survey that showed one in three marriages were to same-sex couples in the first month of legalized same-sex marriage in the state. Rybak noted that a number of the couples he married beginning at midnight Aug. 1 were out-of-state couples.

On the tour, he met several couples who indicated they were persuaded to come to Minnesota to marry.

In the midst of the conversation, Rybak and Stiles suddenly found themselves brainstorming about how they could attract same-sex couples to Minnesota for weddings even in the bleak winter months.

“Loppet weekend,” said the mayor, referring to the City of Lakes Loppet (Feb. 2-3).

Ah, so many possibilities. Romantic ice chapels. Sleigh rides. Before long, they were trying to figure out if they could tie same-sex marriage to the annual Pond Hockey Tournament.

Eventually, they came back to the subject of the mayor’s tour. When he was in Madison, Rybak noted he was joined by the city’s mayor, Paul Soglin, and they were surrounded by young people.

A challenge to Gov. Walker

“I said that he always talks about removing government regulations from business,” Rybak said. “So I said, ‘Why doesn’t he remove government regulations and give people the personal liberties he likes to talk about? … What is interesting to me is that Walker now only says ‘that laws on marriage were in place before I became governor.’ That’s a long way from saying he opposes same sex marriage.”

Wherever he goes, he makes frequent references to the Meet Minneapolis web page and says, “Operators are on duty ready to take your calls.”

Rybak says he’ll celebrate the day that Minnesota loses this particular competitive advantage. That will mean most states will have gay marriage.

Meantime, in his final few months, he’ll do some more tours because these tours are pretty heady stuff to the mayor.

He recalled he was a reporter at the Star Tribune 35 years ago, when the city’s police department was still conducting raids on the bath-houses on Hennepin Avenue. (The bath-houses were among the few places gays could freely congregate.)

Now, as mayor, he was the officiant of the marriage of the city’s police chief, Janee Harteau, and her longtime partner, Holly Keegel, a sergeant on the Minneapolis police force.

At the time of the campaign to defeat a proposed constitutional amendment that would have limited marriage to a man and a woman, Rybak believed the focus should be on “not messing with the constitution.”

But much of the campaign was devoted to love and personal choice. When the constitutional amendment failed, the tone of the campaign set the stage for the Legislature to legalize same-sex marriage.

“I’m glad they [the Vote No campaign] didn’t take my advice,” Rybak said.

There will be more tour stops, although just where he’ll go is yet to be decided. Rybak and his staff deal with a city’s gay, lesbian and bisexual and transgender organizations before showing up. But Denver, Austin, Texas, and Sioux Falls, S.D., seem like likely targets of the “Marry Me in Minneapolis” campaign.

According to the mayor, "Marry Me in Minneapolis'' has a memorable ring to it, like "Springtime in Paris.''