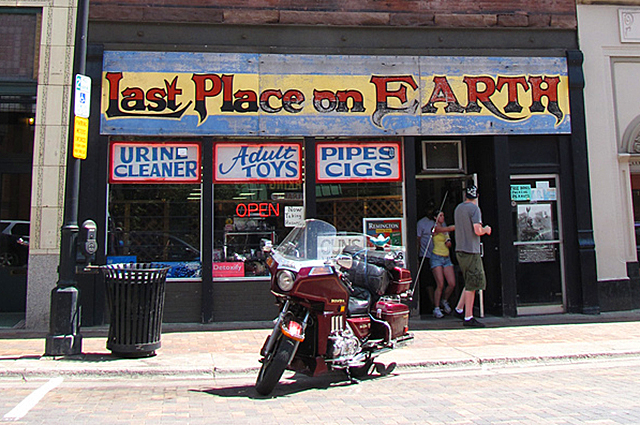 Creative Commons/anthonylibrarianJim Carlson, owner of the Last Place on Earth shop, was found guilty of 51 of 55 charges on Monday.

The activities of Duluth head shop owner Jim Carlson have inspired the ongoing legislative hearings that will likely result in additional measures to tackle synthetic drugs in Minnesota.

Monday’s jury verdict against Carlson, owner of the Last Place on Earth shop, likely bolstered the spirits of authorities, who have been watching the federal case to see what it could mean for going after other businesses that sell the substances.

DFL Rep. Erik Simonson, who represents Duluth, chairs a special committee that is examining how to stop the spread of synthetic drugs.

At its Wednesday session, the legislative committee plans to examine the effects of synthetic drugs in the metro area.

Simonson has a handful of ideas he wants to put into law. Lawmakers, he says, should authorize an education campaign against synthetics. He also wants to craft a “look-alike law,” similar to one being challenged in Indiana. Such legislation would regulate the analogs, or variations, of currently controlled chemicals.

Schoen, who is also a member of the legislative committee, said lawmakers should examine the dramatic “Faces of Meth” campaign to see what resonated with the public there. He also pushed for giving the state Board of Pharmacy expanded authority.

State lawmakers are hopeful about new regulations but see a long and difficult path in improving Minnesota’s synthetic drug laws.

The drugs, which are similar to amphetamines and other controlled substances, are often known as “bath salts” or go by even more exotic names. They resulted in nearly 23,000 emergency room visits nationwide in 2011, according to a September report from the federal government.

Schoen and other lawmakers acknowledge that politicians have been late in trying to curb their use.

So far, lawmakers have added a few compounds a year to a list of controlled chemicals. In response, the drug manufacturers simply dream up slight variations in formulas, offering new, unregulated drugs to retailers. And they bypass the federal analog law by saying the chemicals aren’t for human ingestion.

The state Board of Pharmacy was granted the authority to classify chemical analogs as illegal more quickly, but that authority will soon run out and must be legislatively re-authorized, Cody Wiberg, the board’s executive director, said in an interview.

Wiberg said he’s drafting legislation for the board to consider later this month.

He did say he would hesitate before supporting additional criminal penalties for possessing the synthetic drugs because of the size of Minnesota’s current prison population.

Paymar called Wednesday’s meeting the “first step in sort of a long process” that would hopefully at least in part address the issue next year.

Simonson said educating lawmakers would be a big part of moving forward with a solution to the problem.

“It’s been a little bit frustrating at first because so many people have never heard of it,” he said. But once people learn, “You walk away with a really strong understanding of the seriousness of the problem.”

Schoen, who as a police officer said he’s seen the negative effects synthetics can have on people, believes retail sales of the drugs will likely disappear soon. But that won’t stop people from buying it online, he said.