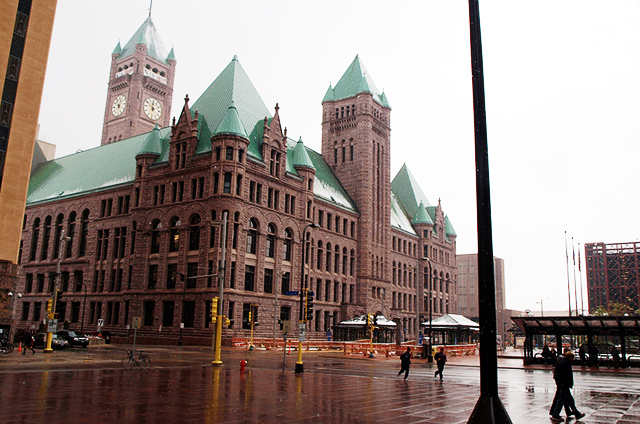 Every major Minneapolis mayoral candidate faces two challenges as they make their final campaign push: convincing the undecided and making sure their supporters get to the polls.

And the campaigns of all eight of the leading candidates say they’re ready to go.

“It’s basically everything,” said Joe Ellickson, campaign manager for Mark Andrew, of the tasks ahead. “Every issue we’ve been talking about, all the doors we’ve been knocking, all the phones we’ve been calling — this is when you go to harvest.”

Two weeks ago, the Andrew campaign contacted 11,000 voters in seven days. Their goal for the last two weeks of the campaign is to knock on 40,000 doors and to make phone contact with another 40,000 voters.

“I know nobody is knocking on more doors and making more phone calls,” said Ellickson, who feels good about the campaign among the crowded field of 35 mayoral candidates. “We led at the precinct caucuses, we led at the convention, and we lead at the financial aspect of this campaign.”

“Nothing replaces the personal contact — a phone call is great — but having somebody go to their door, connect with them, hand them a piece of literature in their neighborhood, that is still the most effective way to engage and persuade the voter,” he said.

“This is everything,” said Patrick Layden, campaign manager for Don Samuels, of the last push. “It’s all about getting those voters to support your candidate on Election Day. If you can’t do that, then you won’t be able to close the deal.”

“We feel we’re in a great position to win this,” said Layden. “Everything we’re showing internally shows people moving in the right direction. It’s going to be a matter of who can appeal to the last group of undecided voters. And with the ranked-choice voting system, it’s going to come down to who has the broadest appeal across the city.”

“We know how critical the last few days are in helping to convince those last few people and get them out to the polls,” he said, declining to share details about the campaign’s get-out-the-vote effort. “If you’re trying to win a race in the last five days, you’re already too late. The reality is that we’ve been building a strong coalition of supporters and volunteers and people throughout the campaign.”

The combination of many candidates and ranked-choice voting has left many potential votes up for grabs.

Early on, the Cherryhomes campaign hired a ranked-choice-voting consultant who prepared them for the large number of undecided voters.

“We knew that this was going to be a long race. We knew that there were going to be high undecideds, so for us, it’s going right where we thought it would go,” Bolton said. “I know we’re ready. We’ve been planning this for a long time. It’s good to be in the home stretch.”

Winton: Many voters first tuning in

Independent candidate Cam Winton notes, too, that “the final stretch is important because for many voters, it’s when they are first tuning into the race.”

“I’ve come out of nowhere in this race,” he said, adding that the media, many of which ignored his campaign early on, are now paying attention.

A first-time candidate, Winton is a Republican who previously was a Democrat and now is running as an independent. “Before this race, I had no political profile in this city whatsoever. I’m proud to be now one of the leading candidates because of the tremendous support I’ve received across the political spectrum.”

Winton credits his rising profile to both his willingness to speak clearly about the need for Minneapolis to live within its means and to his appearances at many community events.

“Anywhere there’s more than four people with a pulse, I go,” said Winton, who is taking a five-week unpaid leave from his job to campaign full time. He is proud that he has the most “likes” of any mayoral candidate on Facebook. In the final week, he will be advertising on radio and television and has volunteers lined up for phone-bank and door-knocking duties.

“It’s been a tremendous privilege to speak to these important issues and advocate for people who have been shut out of the insider mutual back-scratching society,” said Winton with a slap at his mostly DFL opponents.

Dan Cohen, meanwhile, has been advertising on radio, television and billboards for several months, spending nearly $300,000 of his own money. He considers it a good investment.

“It is important for a candidate to make his or her presence known as much as they possibly can through visible advertising,” said Cohen. “When voters go to the booth and decide to pick out a candidate, they’re going to, I think, be most likely to base their decision on the candidates they are most familiar with, most aware of through the advertising.”

His theory apparently paid off earlier this year when a Star Tribune poll placed Cohen first in the field of candidates.

Going into the final stretch, Cohen is supplementing his advertising with lawn signs, door-knocking and social media but he has no plans for a phone bank.

He worries that potential voters are not fully tuned into the campaigns.

“I don’t have the feeling of a strongly engaged public, deeply interested in the outcome of this election,” said Cohen. “I wish it were because that always makes for more of a civic spirit behind whoever gets election, but I don’t sense that’s the case.”

Bob Fine sees continuing signs of interest in his campaign. “We’re getting calls requesting more lawn signs, which is kind of nice,” he said.

Fine has door-knocked in 43 of the city’s 117 precincts. He plans a mailer in the final week and is dropping his campaign literature at front doors.

“People like the fact that a mayoral candidate is coming to their door,” said Fine, who said he’s noticed the word seem to spread through a neighborhood when a candidate, as opposed to a volunteer, is spotted. “I’ve seen people out but not the candidate. That doesn’t appeal to a lot of people. They want to see the candidate.”

“It’s an old-style, grass-roots way of campaigning, but I think it’s effective,” said Fine, who will go early to a candidate forum so he can knock on doors in the neighborhood. “I don’t have the machinery of a gigantic staff and a lot of money.”

Door-knocking has given him insight into an issue that has been on the back burner during the campaign. With no major increases in city property taxes a year ago and none likely for next year, that issue has not been a hot topic.

“I have this bold idea that I can reduce property taxes,” said Fine, who found that the issue is on the minds of the voters as he went door to door. Since he started talking about property taxes at candidate forums, he says, other candidates have joined the conversation.

“I’m sure I can find efficiencies in government,” he said. Fine, who serves on the Board of Estimate and Taxation, believes the proposed 1 percent cut in the 2014 budget should have been higher — at least 4 percent — because of the increase coming next year in state aid to Minneapolis. “That money should be returned to the taxpayers.”

Candidate Stephanie Woodruff is optimistic, too. “We are jazzed and we are excited,” she said. “Over the last month, we’ve had huge momentum.”

“I think people get that we’re not what we could be as a city,” adds Paul Ostrow, Woodruff’s campaign manager, who thinks other candidates are misreading the public. “They’re misreading the extent to which the public wants change.”

“I don’t have a high-paid staff telling me what to do,” Woodruff said. “It truly is grass-roots. I don’t have paid staff. I’ve never run before.”

They have built the Woodruff campaign around the idea of putting people, neighborhoods and children first. Even though her campaign may spend only $6,000, Woodruff has been included in many of the forums and is considered one of the eight higher-profile candidates among the 35.

Hodges: ‘Vision’ for city is key

“I was blown away when I saw our get-out-the-vote plan,” said Aaron Wells, communications director for the Betsy Hodges campaign. “I’ve never seen anything really like it. Our field team is really knocking it out of the park.”

Details are not for sharing, but there are a phone bank, a door-to-door campaign and an intense focus on what the campaign refers to as Hodges’ “vision” for Minneapolis.

“For us, I think our top priority, just as it has been all along, is having the right number of conversations at the doors and on the phones — talking about the right issues as we make our final argument to folks who will be voting,” he said.

“As we wrap up Betsy’s argument for why she should be the next mayor, in a lot of ways, we’re looking at everything we’ve talked about in this campaign,” Wells said. “Our numbers have been really, really encouraging. We’re up all the way along. We just need to make the final argument.”

On Sunday, Hodges received the top ranked-choice endorsement of the Minneapolis-based Star Tribune Sunday, with Samuels the newspaper’s second choice and Cherryhomes third.

“We could not be happier,” Wells said, noting that her endorsement came despite her opposition to the Vikings stadium project. “This will keep our momentum going through Election Day.”

Samuels’ campaign manager called the endorsement a “last-minute game-changer” for his candidate.

“Certainly for people that haven’t quite tuned in yet, or are just checking out the mayor’s race, of which there are quite a few, something like an endorsement could pique people’s interest,” Layden said.

“It’s good to have recognition — everybody likes recognition,” said Bolton of the Cherryhomes campaign. She was especially pleased that the Strib’s editorial board made first, second and third choices, just as the voters will be doing next week. “It gives people an opportunity to see the depth Jackie brings.”